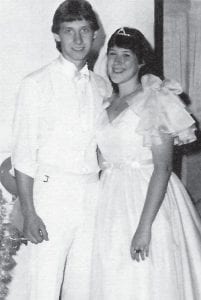 The 1985 Junior–Senior Prom was held at WHS’s cafeteria on May 11. The theme was “An Evening in Paradise” and truly it was just that. The highlight of the evening came when Craig Spangler and Candy Crase were crowned Prom King and Queen. Music was provided by Bradley Jones, WIFX radio station. Host and hostesses: Doris Banks, Beverly Bates, Beth Richardson, Kristi Roark, Melissa Corder, Candy Nantz, Carol Caudill, Robert Back, Tony Bolling, Darren Hubbard, Rod Day, Clay Mullins, John Combs, and Ronald Morgan. Many thanks go out to all the people who made this special evening such a success.

(The above article from the 1985 WHS Yearbook.)

On April 4, 1985, Whitesburg’s Math and Science Teams traveled to Southeast Community College for their annual Math-Science Day. The competition lasted for two hours; the students then ate lunch and attended the award ceremony.

(The above article from the April 24, Black Kat.)

On Oct. 13, 1984, the Whitesburg cross-country teams traveled to Paintsville, course of the Regional Cross-Country meet.

The girls’ cross-country team finished second only behind regional rival, Clay County. The Lady Jackets were led by Deanna Boggs who won in course record breaking time of 12:06. Boggs was followed by Kim Fields who finished fourth in 12:28. Tracy Romine, 11th; Elizabeth Watson, 17th and Donna Profitt, 18th rounded out the top five.

(The above articles from the 1985 Yearbook and the Black Kat Newspapers.)