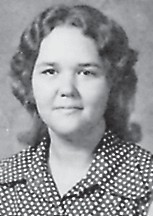 Valedictorian for the Whitesburg High School graduating class of 1973 is Mitzi Carol Mayes of Letcher, Kentucky, daughter of Jeff and Hettie Mayes. Mitzi is leaving WHS with a 3.875 standing of a possible 4.000 — first in her class of 135.

The salutatorian of the 1973 senior class is Patricia Ratliff . She graduated first semester of this year. Pat ranks second in the class with a 3.789 average of a possible 4.0.

Pat is the daughter of Howard Ratliff Jr. of Kingscreek.

Steve Banks continues to be the big gun for the Whitesburg High School Yellowjackets.

Banks scored 16 points and hauled down 14 rebounds to lead the Jackets to a 49-45 victory over the Letcher Eagles in overtime Tuesday night.

Letcher drew first blood by taking a 1-0 lead on a foul committed by junior forward Frank Hollan. But the Yellowjackets were not to be denied as they pulled the lead out to 18-12. Whitesburg got into trouble after Banks committed his foul midway through the second period and fell behind by two points at halftime.

In the second half, Letcher came out playing showdown ball to control the lead most of the way through the second half. The Eagles led by two points with about 30 seconds left on the clock when the Yellowjackets tied the score at 43 apiece. Then, Letcher brought the ball down the floor and with 11 seconds left in regulation play was called for traveling. Thus, the score was tied at the end of the half, and the game went into overtime. The Yellowjackets then showed their ability to come from behind to win ballgames as the overtime period was all theirs. 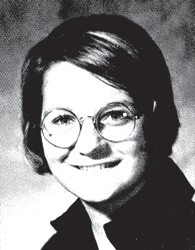 These students have earned the right to represent WHS and Region 6 in the state competition. The state contest will be held March 8, 9, and 10 in Louisville.

(The above article appeared in The Mountain
Eagle
June 7, 1973.)

Steve, the son of Mr. and Mrs. Wid Banks, lives at Sandlick. His favorite sport is basketball, and he shows it with the many trophies he has won over the years. Horse training and riding, his favorite past time, has also proved satisfactory. Another honor Steve received was being chosen ‘Mr. Freshman.’

Leeanna, the daughter of Mr. and Mrs. Carson Hall, lives at Colson. Among her favorite interests are football, swimming, and especially basketball. Her favorite pastimes are reading and sewing. Another honor she received at WHS was marching in the homecoming festivities when she was a sophomore.

Tonight, May 31, the graduating class of 1973 will be together for the last time at the West Whitesburg Elementary School. As the WHS band plays the traditional “Pomp and Circumstances” this year’s seniors will march hesitantly to their long-awaited diplomas. This year’s class consists of 130 seniors.

Rev. Bill F. Mackey will give the invocation, followed by our valedictorian, Mitzi Mayes, and salutatorian, Pat Ratliff Halcomb. Then, under the direction of Mr. Paul Anderson, the WHS Band will play “A Folk Legend Overture”.

Guest speaker Troy Eslinger, president of Lees Junior College, will be introduced by Mr. J.M. Burkich and at last, but all too suddenly, Mr. Boggs will present the diplomas.

Rev. James C. Erwin will give the benediction and another senior class will proudly walk out to face the world.

All were captured by the romantic transformation for the Junior-Senior Prom, held Saturday night, May 19. The evening was devoted to the theme of “Somewhere My Love”.

The evening danced on to the music of Brewer’s Art as anticipation mounted toward the climax of the night . . . crowning of the Prom King and Queen. As the lights came on, giving full view of all, the welcome was delivered by junior Bill Martin Collins and the response was given by senior Homer Combs. Then, WHS Assistant Principal, Mr. Horn, introduced junior Delana Watts, who sang the theme song, “Somewhere My Love”. Finally the moment had arrived. As Sheryl Garrett and Jenny Combs sought out the senior ‘royalty’ among the crowded tables, many were obviously nervous. Upon sighting the Queen and King, Phyllis Profitt and Craig Campbell, were escorted to the stage, where amidst the roses, they were crowned and then danced the traditional waltz.

The evening had reached its peak and left everyone filled with excitement and memories forever.

The above article from the May 1973 Black Kat.)

Sally was chosen as Miss Yellowjacket for her scholastic ability, leadership and character.

(Note: Anyone having any pictures, Black Kats or other information to share can get in touch with me at 606-633-5966 or e-mail at bennett.welch@gmail. com.)