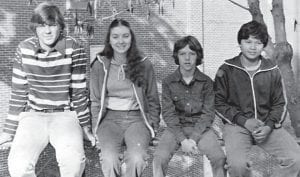 Greg Creech lives at Partridge with his parents Harvey and Shirley Creech and has two brothers and one sister. He likes to hunt, fish, and enjoys the company of the opposite sex. Greg is on the basketball and baseball teams. He was nominated for the McDonald’s All-Star basketball team.

Sally Wampler is the daughter of Mr. and Mrs. Larry Wampler of Mayking. She has three sisters and one brother. Sally enjoys running, swimming, and horseback riding. She is in the Science Club and is a member of the track team. Sally plans to continue her education at Morehead State University.

Mark Cornett is the President. His parents are John and Sally Cornett. He is a member of the Whitesburg High basketball team.

Pam Brashears is the Vice President. Her parents are Zelma and Corbin Brashears. Her hobbies include swimming and reading. Her favorite singing group is Foreigner. 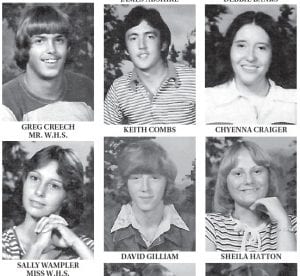 Andy Cates is the Secretary of the class. His parents are Cleo and Barry Cates of Sergent. He enjoys all sports and is in the Pep Club. 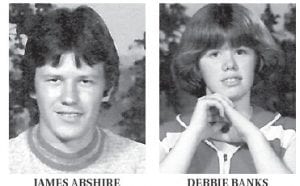 (The above articles from the 1979 Yellowjacket Yearbook and Black Kat Newspapers.) 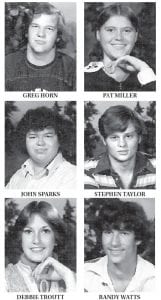