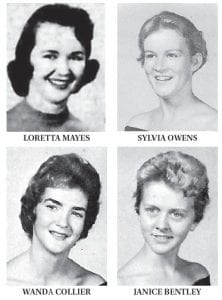 Loretta Mayes, daughter of Jeff and Hettie Mayes of Jeremiah, has been selected for Who’s Who Among Students in American Universities and Colleges. She is a senior at Eastern Kentucky State College and is majoring in mathematics and physics with a minor in chemistry. She was graduated from the Stuart Robinson High School with top honors in her class.

The students recognized in the publication are nominated from approximately 700 colleges and universities. Campus nominating committees are instructed to consider in making their selections, the student’s scholarship; his participation and leadership in academic and extracurricular activities; his citizenship and service to the school; and his promise of future usefulness.

Miss Mayes has several offers of employment when she graduates in June, 1958, she has not definitely decided which to accept. Her father is now principal of the Letcher High and Elementary School of Letcher, and her mother is a teacher of the sixth grade of the same school. They have three other children, Jesse 12, Jerry six, and Mitizi Carol two.

Miss Mayes came in for some high praise from W. L. Cooper, former superintendent at Stuart Robinson, who termed her one of the best all-around students to attend the school during his 32 years of service there. She has brought honor to the school as well as to herself, Cooper said. Miss Mayes was valedictorian of her class and an active member of the Stuart Robinson folk dance team, Cooper added.

Miss Mayes later married Jimmie Arthur and they served as faculty members in the Whitesburg High School Math Department for many years.

Sylvia Owens of Partridge is the winner of the “Homemaker of Tomorrow” contest at Whitesburg High School.

She is the daughter of Riley Owens. A senior student, she is first vice president of the Future Homemakers of America.

Miss Owens won the contest by receiving the highest score on a written examination on homemaking knowledge and attitudes given on Dec. 3 to girls in the graduating class. Her examination paper will be entered in competition to name this state’s candidate for the title of All-American Homemaker of Tomorrow. She will receive an award pin. The contest is conducted each year by the Betty Crocker division of General Mills.

The above articles from the January 1958 Mountain Eagle. ank

Th you WHS by Wanda Collier,

Editor of the Black Kat

In the month of August 1955, good ole WHS opened widely its doors — and invited a class of scared and lost greenhorns into its tender care.

Yes, these same doors that first welcomed us are the doors that are now swinging wide as they allow the senior class of 1958 to depart.

Except for a few new windows and scars, the doors haven’t changed; but if you linger long enough to look into the eyes of the members of the class as they go one by one into a strange world, you can easily detect a difference in them. We are no longer scared and lost, thanks to you Whitesburg High.

Oh, no, don’t misunderstand me! We know that in order to attain most goals in life we must prepare ourselves for a worthwhile life.

However, this we will be doing in the future. At the present I would like to reminisce a bit as I look back on that Freshmen Class of 1955.

Yes, we were scared, but as the years rolled on WHS became a great part of us. Of course, we are deeply sorry that there were a few who dropped by the wayside and will not be graduating with us. We will admit that the going was not always easy, but we can truly say that the brightness and highlights we shared blot those dark spots out. We have memories of friends, happenings, and just the old hill, that will always fill a certain place in our hearts no matter who we are, or where we go.

Underclassmen, I know you will not see this as I see it now, but too will be receiving your diplomas sooner than you think possible. Make use of your days at Whitesburg and don’t forget that never a door is closed that God doesn’t open another.

As a personal message to all seniors I want to say that the four years at WHS, and just sharing your friendship are worth more to me than words can express!

To the future editor of the Black Kat, I wish you all the luck in the world and I know you will enjoy it as much as I have — mostly because you have two wonderful advisors!

And for you, old Whitesburg High — Thanks again for the memories!

O God, source of all wisdom and all truth, we ask Thy blessings on us this day of graduation. We are thankful for the public schools of our land where all may learn; we are thankful for alert and consecrated teachers who teach the principals of freedom and democracy in the way they teach as well as in what they teach.

We are thankful for the parents who have helped make possible this day’s achievement — who have bought the books, sharpened the pencils, called attention to homework, and signed the report cards.

Help us to understand that fame is not worth seeking; that money will not buy everything; that the only enduring values are found in friendship and truth and honesty and integrity; and that nothing can take these from us. Always give us enough manhood to say what is true and to do what is right — even if it hurts. Deliver us from the sissy ways of insincerity and of playing favorites and of apple polishing.

Help us to believe that we can make the world a better place that our fathers have. But make us aware that it isn’t easy to get rid of prejudice and hypocrisy and jealousy and greed.

Help us to be willing to accept the things we can’t change. Let us start improving ourselves. With a sense of humility and also a spirit of daring may we go out from these halls determined that every day we shall grow in knowledge and wisdom and in favor with God and man. Amen.

Early Monday, 101 anxious, wide-eyed seniors, and their sponsors, Mr. and Mrs. Burkich, Mrs. Comb, Mrs. Lewis, Miss Little, Mr. Enlow and Mr. Hall, boarded the buses on the school hill and left for Washington, D.C. We ate lunch on the buses and stopped at Natural Bridge for thirty minutes of dancing, eating and fun. We continued our trip and arrived in Washington at the Stradford Hotel, where we were to stay while there, at about 11:30 Monday night.

At 6:45 Tuesday morning we boarded the buses with our guides and went to Sholls Cafeteria for breakfast, and then began touring Washington. We first visited the Bureau of Engraving and Printing, there we saw just how our money is made. We then toured the U.S. Treasury Building, and then to the Capitol lawn to have our pictures made. We toured the Capitol Building, Supreme Court Building, and Library of Congress. We went to the S&W Cafeteria for lunch. We continued our tour to the Department of Justice and National Achieves. Tuesday night after dinner at the S&W, we boarded the boat for the Moonlight Cruise. The boat was the “Mt. Vernon”, one of the boats of the Wilson line. There were approximately 1200 high school students on the boat.

While cruising down the Potomac River we enjoyed dancing to the music of a wonderful band. The boat docked for 45 minutes for us to visit the Marshall Hall Amusement Park.

Early Wednesday morning the tired seniors arose at 7:45 and began sightseeing again. We began by touring Mt. Vernon, the home of George Washington and Martha Washington, Arlington National Cemetery, Tomb of the Unknown Soldier, where we saw the changing of the guards, the Iwo Jima Statue, Lincoln Memorial, White House, Washington Monument, The Smithsonian Institute, and the Jefferson Memorial. We went back to the hotel where we could rest for the first time while we were there in Washington.

Wednesday night we went to Cinerama. We saw “Search For Paradise.” We came back to the hotel and there we enjoyed about one hour of dancing in the hotel recreation room.

We arose Thursday morning and after breakfast we left the capital city and started home. We arrived in Whitesburg at about 3:30 Friday morning.

The above articles from the 1957-58 Black Kat Newspapers.