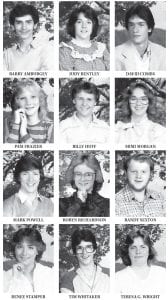 Summer is over and Whitesburg High is back into the swing of things. The students look back on their fond memories of summer and recollect a few of the things that they did.

Many of Whitesburg’s best performed at a recent talent show held in our gym. The show was open to all those who wished to participate.

The talents displayed included singing by Gloria Terricano, Stephanie Meade, and others while Betsy Adams accompanied. Kaye Day did a great Rod Stewart while “Passion” played. Our basketball girls showed us what it takes to be a cheerleader. And, of course, we cannot forget Heather Bradshaw and Renee Stamper for showing us the art of falling down, over and over again. Ozz Jackson, the master of ceremonies, displayed his talents for color coordination.

The show was sponsored by the cross-country team.

In February the French Club chose Stephanie Little and Marvin Boggs as their 1982-83 “Sweethearts.” A Valentine party honoring them was enjoyed by the club, at which time they were presented token gifts.

This school year, in addition to the sweetheart party, the club had a Christmas party and went caroling in the halls before Christmas vacation.

The French Club is open to students enrolled in French II and to those who have completed at least two years of French.

More of the senior will

I, Gail Shepherd, will my ability to collect poems to Gail Sturgill. I, Clifford Brown, will my football bruises to Scooter Brown. I, Mia Ferguson, will my ability to look at D.A. Combs without drooling to Lisa Jenkins. I, Howie Mason, will all of my good times in Miss Hall’s class to Tony Frazier. I also gladly will my Letcher letterman sweater to Jack Lutrell, who gave his to Heather Bradshaw. I, Gary Boggs, will my parking place in the teachers’ parking lot to Tony Frazier so he won’t have to walk so far. I, Cora Bell Boggs, will my skipping and fooling around abilities to Richard Boyd. I, Kevin Tolliver, will my long legs to Debbie Imperial and all of my tightfitting jeans to Anthony Ison. I also will my body to the science building. I, Elzie Kiser, will my public speaking ability to Sonny Bates. I, Bobby Pike, will my ability to hit a baseball in the river and my ability to be married while in school to Ronnie Bowling. I, Joey Sturgill, will my back seat in Mrs. Garrett’s room to Harold Trent. I, Stephen Fox, will my ability to play football to Randall Sexton. I, Tim Sturgill, will the piece of chewing gum I left under the study hall seat when I was a sophomore to Roger Boggs, if he is brave enough to retrieve it. I, Damaris Adams, will my vital organs to Laura Caudill in hopes that someday they will become handy. We, Heather Bradshaw and Renee Stamper, will our overalls from the talent show to Darla Banks and Angie Brashears. I, Jatanna Adams, will Monick Wampler one gallon of pink lemonade in hopes that she can drink and be merry. I, Barry Miles, will my ability to play the drums without messing up to Harold Trent.

The vocational school has compiled a list of its WHS seniors and the various awards they received during their stay there. The list is as follows:

Elzie Kiser received two first-place awards in his junior year. He placed first in both the local and regional FBLA Public Speaking contest. He also competed at the state level that year. In his senior year, he placed first in the local FBLA contest and third in the regional contest. He placed in the top eight at the state level. He was also elected FBLA club morning president. He was runner-up in the Outstanding Business & Office Student award and won the Outstanding Salesman Award for FBLA candy sales.

Charlotte Hall was elected FBLA club in the evening session.

Betsie Adams received the second-place award in Penmanship and third place in Business Communications in the local FBLA Contest in her junior year.

Ramona Cook placed third in Business Math II in a local FBLA Contest as a junior.

Laronda Baker was the FBLA Club Treasurer in the morning session as a senior.

Robyn Richardson was the FBLA Club Treasurer in the evening session.

Paul Maxsom placed third in drafting at the regional competition.

Tony Evans and Chuck Morris participated in the Hillbilly Competition at Nationals.

Kermit Brock won an award in the first regional in Job Interview.