These WHS graduates were later members of the WHS faculty. 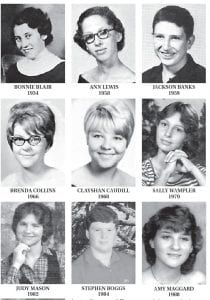 Whitesburg and the large audience that witnessed it were exceedingly well pleased and highly entertained on last Wednesday evening when the Junior High School play was given in the graded school auditorium. Mrs. Rosa Jones, though for several days handicapped physically, was in charge of the training of the players, brought out the very best that was in them, enabling them to acquit themselves about perfectly on the stage.

“On the Hill” by Wanda Lee Collier 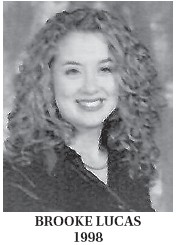 Our guest speaker for chapel on Wednesday, Oct. 30, was Rev. Meyers of the Methodist Church.

The following A-team cheerleaders, Donna Spangler, Wanda Rogers, Rita Kathryn Hale, and I attended the annual cheerleading clinic held in Lexington on Saturday, November 2. We were accompanied by Miss Betty Little, cheerleading sponsor, and Mrs. Bob Fike. We regret that Lily Jane Collins, cheerleader, was unable to make the trip. Everyone had an enjoyable time.

Looks like the seniors have been digging out their old algebra and English books to review for the aptitude tests which were given on Monday and Wednesday.

Due to the epidemic of flu there have been quite a number absent from school for the past few days. The hundred mark has already been reached in the high school.

To the strains of “Pomp and Circumstance” played by Mrs. Rose Jones, the 154 seniors will enter the halls of the gymnasium for graduation exercises. Special vocal music will be furnished by the Woodwind Quintet. Doris Profitt will deliver the Salutatory address and the Valedictory address will be presented by Judy Combs.

Our guest speaker is to be Dr. A.A. Page, of Pikeville College.

This will be one which will inspire creative writing. It will be an honor to have your work appear in it. The title of the booklet is “Lit, Wit and Logic”. The name was suggested by Delma Gilley, Class of 1962, who received $5 for her suggestion.

The senior class elected their class officers for the 1965-66 school year. Serving as President is Sharon Garrett; Vice President is Debby Webb; Treasurer is Gary Fields and Secretary is Phyllis Day.

The Class Flower is White Orchid; Class Colors are Mint Green and White; and the Class Motto is “Climb Every Mountain”.

Three of Whitesburg’s distinguished senior football players went to George- town College for an interview for a football scholarship. These boys are Sam Frazier, Jeff Hunsucker, and Mike Burkich. Only one of these boys signed, that was Mike Burkich. He is the first scholarship award winner in six years.

The Drama Club, which was formed last spring, is working on its new production entitled “Raspberry Red.” It is a comedy set in the1920’s era, which satirizes the problems of teenagers.

About 15 students are working on the play under the direction of Mr. Henrikson, the Drama Club’s sponsor. The tentative presentation date for the new production is late November

This year three teachers are retiring from WHS. Mr. Preston Armstrong, who taught for 25 years at WHS, was a teacher of science. Mrs. Joy Wray Breeding, a teacher of English, has taught at WHS for 27 years. For 27 years Mrs. Mary Emma Lewis has taught English and History at Whitesburg. These three teachers have devoted a total of 81 years toward the education of students and on behalf of the 1982 Yellowjacket staff, we express our appreciation for their teaching and guidance throughout the years.

With the addition of the Junior Reserves Officers Training Corps to our curriculum we now have a chance to learn basic military skills.

The course is taught by Sergeant Enoch Sturgill, who is a native of Letcher County. Mr. Sturgill was in the military for many years before leaving to return to his hometown. He is married and has three children.

Because of the lack of time and space, students had to be picked on the basis of their academic standings and attendance. Students who were picked for the class have gained much knowledge about the U.S. Military with much more to learn. Every cadet had the opportunity to participate on the drill team or color guard along with many other JROTC activities.

First basketball homecoming in many years

Whitesburg High had its first basketball homecoming in many years Feb. 6, 1988. The festivities were great from the 12 queen candidates to the homecoming dance, which was held following the game.

This year we had three teachers who were married. Stephanie Ilic and Bart Frazier were married in Faith Baptist Church at Myra. April Hogg married Brian Frazier this year.

Mrs. Barbara Bates retired at the end of this school year.

WHS was pleased to welcome four exchange students to our school this year. They were Radim Bruzek, Lucia Ramos, Shirley Pang and Bernard d’Gottal.

(The above articles from WHS Yearbooks, Black Kat Newspapers and The Mountain Eagles.)