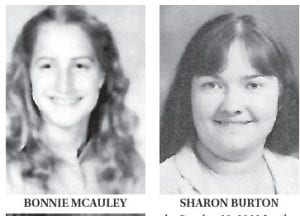 Last week, I said I was going to spotlight some of the talented people on the high school hill and this week I have spotlighted Miss Sharon Burton for her poetry. Sharon is the daughter of Mr. and Mrs. Eugene Burton. She lives at Partridge, Ky., and is a junior at WHS. When asked why she liked to write poems, Miss Burton replied, “I like writing poems because it is the best way in which I can express my thoughts and feelings.” She has also written a poem about writing poems. It is as follows:

Sometimes, when I write a poem,

I do not understand what it means.

It is as though I were in a play,

And going ahead to other scenes.

When this happens, I read it again

And say to myself, “I don’t understand.

Although it has meaning and all that. 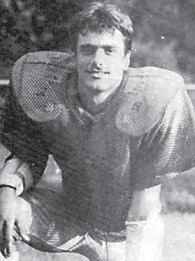 It doesn’t apply to the situation at hand.”

Then I’ll put it away

And forget it for a while

And when the situation does appear,

I’ll think about it with a smile.

So, now, maybe you can see

Why, when I have something to doubt.

I go to my little, blue bedroom

And write ‘till I have

Nothing to think about.

I am also spotlighting the WHS Cheerleaders. I shall start with the boys’ varsity cheerleaders. All of the Yellow jackets are proud of them for winning second place at a competition in South Carolina. They will proceed on to competition in Florida. So, once again Congratulations, Cheerleaders!

The boys’ varsity squad is made up of Dottie Fields, Heather Buntin, B.J. Maggard, Sandy Maggard, Jennifer Noble, Brenda Williams, Judy Bentley, Lisa Gibson, Telena Short, Teresa Wright, Annette Combs, and Beth Lucas. In camp competition at ETSU, they received first place as well as a spirit stick, nine superior ribbons, and other awards. On October 3, they participated in Y.M.C.A. Regional Competition at Frankfort where they received second place. On December 12, they will compete in the Y.M.C.A. state competition at Centre College.

The girls’ varsity squad is made up of Tammy Starnes, Pam Hall, Jackie Craiger, Suzann Hall, Diana Hatton, Trina Jenkins, Mary Page Polly, and Denise Simmons. In camp competition, they received first place as well as five superior ribbons, three excellent ribbons, and on the final day, two superior ribbons. They also placed second at the Y.M.C.A. competition in Frankfort and will compete at Centre.

The seniors at WHS were also busy this past week. On Monday, November 9, college night was held at the WHS cafeteria. Representatives from approximately 25 colleges and universities were present. The welcome was given by Kitty Gish and the invocation was led by Mark Cornett. A panel discussion on selecting the right college, admissions procedure, student activities, the community college system, financial aid, and professional preparation was held by several college counselors. They were introduced by Elizabeth Masters. Later, students had an opportunity to meet with the counselors individually. I hope that everyone who attended learned more about college life and I hope that it helped the seniors decide on where to attend.

On Thursday, a meeting of the Quicksand Area Teen Council was held at the Leslie County Library in Hyden. Six 4-H’ers from WHS attended. The council discussed plans for the Christmas party to be held next month. Letcher County is in charge of the decorations. After the meeting, the teens enjoyed going out for pizza.

Also, on Thursday, the FBLA club from the vocational school took a trip to Pikeville for a Regional FBLA Conference. Approximately 15 Yellowjackets attended the conference.

On Tuesday, November 10, a 67-year-old gymnast held a program in the WHS gymnasium. He demonstrated juggling, and how to ride a unicycle. At one point of the program, he had three student volunteers (David “D.A.” Combs, William Reedy, and Kim Kincer) attempt to balance on a board set on a rolling cylinder. Everyone enjoyed watching these volunteers attempt to stand because they found that it was not as easy as it looked, but they all managed to stand for at least a few seconds.

On Monday, November 16, the yearbook staff held assemblies to promote the sell of the yearbooks. The members put on a skit and followed it with a film entitled “An American Time- Capsule”. Everyone enjoyed watching the paly and I hope that everyone will buy a yearbook or they just may end up like the characters in the skit.

The Yellowjackets are also proud of Elzie Kiser for being a county winner in the 4-H Speech Contest, which was held on Friday the 13th at the First Baptist Church. He will go on to area competition this coming Friday.

(The above article from the October 19, 1981 Letcher County Community Press.)

Named Player of the Week

Frazier, a 6-4 195-pound senior Yellowjacket, was on the receiving end of a 40- yard touchdown pass play in Friday night’s game that pitted Whitesburg in their first district game against M.C. Napier.

Randy also ran in a 19- yard touchdown during the game from his halfback position.

Randy racked up 44 yards on two pass plays and gained 27 yards on three carries for a 9.0-yard average per carry.

Outstanding as he was on offense, Randy, too, took command on defense leading the Jackets with seven unassisted tackles and two interceptions of Navajo passes.

(The above article from the October 1, 1981 Letcher County Community Press.)

Mark Bates and Bobby Pike each had a single and a home run, while Jimmy Benson also added a home run.

Jimmy Benson was the winning pitcher with six strike outs and two walks.

In the second game of the tournament, the Jackets defeated the Fleming-Neon Pirates,14-12, on May 5.

Leading hitters for the Jackets were Tim Smith, Jimmy Benson, and Randy Frazier. They each had three hits. Bobby Pike and Gary Boggs had two hits each. Pike and Frazier hit two home runs apiece, while Benson hit one home run. Whitesburg scored 14 runs on 15 hits, and made six errors.

Tim Smith pitched three innings. He was then relieved by Randy Frazier, who was the winning pitcher for the Jackets.

The team then advanced to the finals of the tournament, where they faced the Knott County Central Patriots on May 6. The Patriots proved to be too much for the Jackets, defeating them 9-8 on a home run in the last inning.

Mark Bates, Bobby Pike, Gary Boggs, and Tim Smith each had two hits, while Jimmy Benson and Randy Frazier had one hit each. The Jackets scored eight runs on ten hits and made two errors.

Jimmy Benson pitched four innings, while Randy Frazier pitched the last two. Frazier was the losing pitcher for the team.