Some of the members of the senior class were

We had finally made it, now we were freshmen, 237 strong and proud to be called “Greenhorns.”

Maguana Blair was our Homecoming representative .

In the Fall Festival, Monroe Hensley represented our class by singing a song.

The B-Team cheerleaders who represented the freshmen class were Estela Buttrey and Ann Eversole. 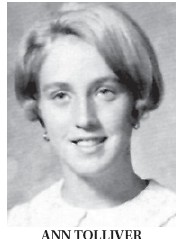 Danny York shared a spot on the varsity football team.

The Conservation Essay was won by Randy Breeding.

Our freshmen year finally came to a close. We’d lost several students, due to marriage, failure, and a road too tough to climb, but those who had climbed the long and winding road were ready to proceed slowly to reach the summit.

This year was filled with optimism due to the new additions to the faculty of Whitesburg High School; James Gose (head football coach), Darrell Bell (head basketball coach) and Mina Breeding (band director).

During this year (Teresa Bake won first place in the Cumberland College Math Contest for the second year in a row.) Our Homecoming candidate was Sue Franklin; Mr. and Miss Sophomore was Randy Breeding and Donna Childers.

The high homeroom in sales was Mr. B. K. Banks and the low homeroom was Mrs. Bates. The top salesman from the senior class was Johnny Mounts with a total of $284.46; second place was Nancy Boggs; third place, Charlene Williams; and forth place, Debbie Boggs. The total sales amounted to $7,594.31. Although the goal of $8,500 was not reached, the total sales this year were second highest in the history of Whitesburg High School. Last year’s senior class sold slightly more with a final total of $7,856.08.

As school continues to roll along so do school improvements. Two new outside lights were recently installed for protection against vandalism. These lights are located between the High School Building and the English Building. Also, several of the boys taking shop have put up a new fence beside the gym. The purpose for installing this fence was to keep students off the bank so that grass can be planted there. And most recently, the walkways around the High School Building and between the English Building and the main road were blacktopped. This improvement will certainly be appreciated on rainy days.