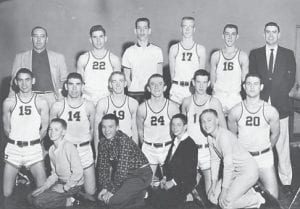 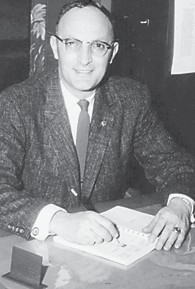 (The above article from the October 1955 Black Kat.)

The first play was “Escape by Moonlight”. It was the story of a girl who lost her lover, and it affected her mind badly. As time went on she thought she saw him and he wanted her to commit suicide. She finally jumped from a 20-story window with him. Ramona Sparks played the leading role and she did a brilliant job of it. Co-players were Charles Music, Gerald Mullins and Eloise Reynolds, who also turned in notable performances.

“The Last Page” was the story of a young man who was framed and sentenced to die for a slaying he didn’t commit. During the confusion his wife committed suicide and proved his innocence by the last page of her diary. Selected critics have praised Miss Janet Ison for her very dramatic performance in this play. She was surrounded by a very competent cast, consisting of John Rodgers and Douglas Polly.

“Highness” portrayed a Russian officer who found his childhood love while trying her for a crime of disposing of some of her own jewels. With the help of a scrubwoman, they escaped from the Kremlin. The scrubwoman was killed by a haughty guard for causing him to lose a prisoner. This play was chosen as the play to go to the festival in Pikeville. We are sure that we will be proud of this cast. Phyllis Ann Hall played one of the most wonderful roles the author has seen in the high school field. Don Webb, Charles Adams and Betty Pratt all gave very impressive performances that are actually better than anyone expected, so now we must recognize these people as real stars.

(The above articles from the February 1956 Black Kat.)

Someone is always bragging on the teachers and students, but you never hear much about the big bearing in the wheel. The man who keeps the wheels rolling and the responsibility of more than a one thousand people’s actions. The softspoken man, who, when he rises to talk, gets everyone’s attention, because everyone wants to hear him. He has no special one, instead we are all specials. He is a young man in mind and in looks and is one who knows the heart of each student, and will listen to their problems when they need his counsel. This man is Kendall Boggs, the best principal in all the land.

Rex Polly was chosen captain of the basketball team. We know of Rex’s fine basketball ability and leadership. The team made a fine choice. He is 6’2”, browneyed, brown-haired senior. The co-captain will be the other four on the first line-up, alternating the honor.

“I Speak For Democracy” — In the elimination contest on Wednesday, Don Woodford Webb was chosen to represent Whitesburg High School in this contest. Others entering were Gerald Mullins, Joella Craft, Norma Jean Stallard, Glenda Ann Holbrook, and Harold Cook.

(The above articles from the November, 1955 Black Kat. ) News and Views — Betty Pratt and Lenville Jones are as steady a twosome as ever. Patsy Ashbrook, who could this Bill Brazzell be that you are all time talking about? Gerald Mullins and Pat Fulton are trying to strike up a romance, it seems. Lloyd Hodge and Bobbie Sumpter seem to enjoy being together. Ronnie Bentley makes regular trips to Stuart Robison after Faye Ison. Is it true Ronnie? Christine Cornett gets mail from Pikeville College. Could it be from Bill Jones? Harold Ogelvie and Lucille Bates make a cute couple, don’t they? Martha Lou Collier leaves us wondering if Monte Fields is her one and only!! People are wondering what happened to Jimmy Blair and Elana Kay Holstein!! What’s between Jimmy Holbrook and Shirley Stallard?? We are wondering what’s between Remus Hart and Joan Morgan!! Arminta Ison seems to like Fleming pretty well. Rumor has it that Tyrone Bentley is the reason!!