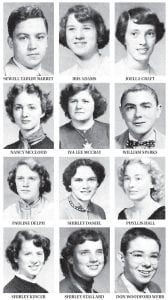 (1) Robert Meade, 14 – Senior – Playing at the right halfback slot — leads all E.K.M.C. Backs with a total of 85 points. He is sparking the team with his fast running, and hard charging. (2) Lloyd Hodge, 18 – Junior – the hard-hitting left half is close behind high scoring Meade with 78 points. (3) Jimmy Jones – 24 – Senior – Capt. Jones is probably one of the best all round players on the squad. Although he has scored only 22 points, his kicking, blocking, passing, and running has set up most of the tallies. He has proved to be one of the best on defense. (4) Gary Long – 23 – Senior starting at right guard, is one of the outstanding blockers on the team and is showing up to be one of the best in the state. (5) Sammy Blair – 11 – Junior, the smallest on the first 11, has done a wonderful job in his first year, as first-string quarterback. (6) Harold Ogelvie, 27 – Junior – A good lineman who works very hard for the team. (7) Linza Wright – 21 – Senior – Playing center – is doing a very good job at snapping the ball. (8) Bassil Sexton, 16 – Senior – Has proved to be a very good end, this is his first year to play football and he made the first string. (9) Major Sparks, 10 – Junior – Has proved to be a very aggressive guard. (10) Joe Cook, 22 – Senior – Playing tackle – has been outstanding in every game thus far. (11) Robert Wright, 13 – Junior – In his end position has caught a touchdown pass, and is doing very good on defense.

Vonda Addington is sporting an alumni class ring around. Could it be Bert Francis from Union?

Mary Lou Noble and Franklin Bentley are getting along fine in their romance again.

It must be true love between Teddy Fields and Ann Brown. Everything is running smooth.

Judy Adams likes to go to Hindman a lot. Could it be because Earl Brown is working over there?

Sally Frazier and William Sparks are together quite often!

The Kat people think Ina Partridge should give Buster Raleigh a chance. How about that, Ina?

Wonder what is between Judy Adams and Carl Dean Hall. We see them together quite often.

Mary Johnson and Burtis Caudill seem to be getting along fine these days.

We wish Anna Caudill would make up her mind to stick with Richard Ison. How about it, Anna!

Winter is here so the girls are wearing knee socks, they do not flatter the legs, but who cares on days like we’ve had this week. The small snow everyone woke up to Wednesday morning called for warm duds.

Turkey day was hardly settled when we started making our Santa Claus list. We must not be too early because the school has started decorating and the Black Kat has a “Letters for Santa Claus” box in the study hall.

The speech, “I Speak for Democracy”, contest closed with our contestant, Don Webb, placing second. The winner was from Jenkins and others participating were from Stuart Robinson and Fleming

The long faces seen around on the campus is because the grades were given out. Everyone is saying I’ll study hard next month to make up that I. The I is very popular among seniors and basketball players.

Mr. Boggs received a letter from the ring company and the long-awaited time will be the week of Dec. 12. Mr. Seale from Lexington will be here with the rings. No more dates, seniors (save your money for your ring). Maybe that cute gal will let you wear it the first week anyway.

The Beta Club gave an invitational rush party for the new members Tuesday. Refreshments were served and 27 whose grades, ability and character merited it were invited to join. This is an Honor National Club, which is accepted very high in college club Phi Beta Kappa. Members receive a magazine, also Beta Pin and Gold Seal on their diplomas saying they are Betas.

Monday the Student Body had a sneak preview of coach Trosper’s 1956 Whitesburg High School Yellowjackets. The boys ran a few plays and everyone was overwhelmed with the improvement the boys had shown over last year.

Tuesday night the welltrained team skipped away with an easy victory over Stuart Robinson (72-49). Although the B team lost a heartbreaker by only 4 points the boys played hard.

The amazing atmosphere this year on the basketball team is the relationship between Coach Trosper and his boys. It has even affected the pep section and the whole school. He not only teaches and guides them, he feels like another fellow on the team. Everyone likes him and the team. Old man spirit is really jumping, the school is behind you 100 percent. Go Yellowjackets, Go!