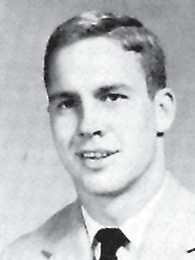 Mr. Glenn Reed (Buddy) Fields left on August 31st for Knoxville, where he will enter the University of Tennessee. He has been awarded an Athletic Scholarship there.

Buddy, who was a bright star for Whitesburg High School in both football and basketball, was honored by his school by being chosen the recipient of the “Outstanding Athlete of the Year” award at the close of the past year. He was also selected to play with the East team in the recent East-West All- Star Football Game which was played in Lexington on August 13th. His many Whitesburg friends wish him success and the best of luck. Buddy was accompanied to Knoxville by his parents, Mr. and Mrs. Elmond Fields.

We understand that the Tennessee and Kentucky freshmen have scheduled a game to be played in Lexington this fall, which will interest many football fans here. 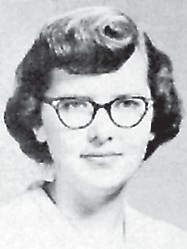 (The above article from the September 8, 1955 Mountain Eagle.)

Miss Anna Louise Daniel, daughter of Mr. and Mrs. Eugene Daniel, and a senior in Whitesburg High School, will represent her school at the Big Sandy Bowl on November 11th, in Prestonsburg. She was chosen by the faculty for her poise, beauty and personality. Miss Daniel was also chosen Queen of the Hallowe’en Carnival. 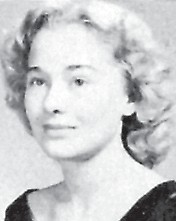 “On the Hill” by Phyllis Hill

According to many comments and the huge crowd on the streets to see the parade, the Homecoming was a grand success. Many beautiful and festive floats were entered and the winner was the VFW. Their float was a Memorial of Whitesburg High School Alumni, who had served their country. Second place was won by the Jaycees, whose theme was “Memories of 1954” in which last year’s beautiful Margaret Day, was featured. The pretty girls and beautiful floats made a most colorful picture and many thanks to those so interested in our school activities.

The homecoming football game was hard-fought, and resulted in victory for the Yellowjackets 13-12, Prestonsburg was our rival loser. e

Th homecoming dance was a grand success and the decorations were very pretty, thanks to Miss Little and decorating committee. 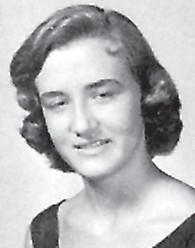 The whole town has been in grief and praying for Burkie Holbrook and Sheila Moore, who are now in St. Joseph and Good Samaritan Hospitals, as a result of an automobile accident.

Betty Frances Webb, a friend and former classmate, also in the accident was fatally injured and her burial was on October 31st. Many students attended the funeral and a choir from the school sang, “Abide with Me.” ey were coming from

Th Eastern College to our Homecoming game when the accident occurred. Proof that Betty Frances was a wonderful and pretty girl was the large crowd that attended the funeral. May God be with her family and many friends.

We were informed today that we have to write a five-minute speech on “Democracy”, and believe it or not, I am shirking my duties, but this makes the 4th the seniors have to write by November 11th. Why didn’t someone warn us? But we always say, “Well, other seniors have made it, so I know I can too.” We all knew that the school would be school from now on, since we have been taking it easy during the Carnival and Homecoming events, but take it easy (please) teachers, you don’t want to grade so many old, dull papers now, do you?

“All is calm before the storm” is an old fable, but this school is never calm, but for a while the storm is over and now (being a senior) I must start on those themes.

(The above article from the November 3, 1955 Mountain Eagle.)

The last whistle has blown on the 1955 football season. No more cold feet, no more shivering on the football field, with nothing to keep us warm but the thrill of the game. No more yelling, “We want a touchdown”, or “block that kick.” No more 85-yard runs with the band playing “On Old Whitesburg,” to the rhythm of the pep section yelling for the team. For the seniors on the team this will always be a sad moment to remember because it may well be the last game for some of them. Good luck to those who plan to further their football career.

But — what’s around the corner is as exciting as football. It is the winter sport, the good old hardwood headed by Coach Ernie Trosper, 6’3” star, and very popular on the hill. The boys to start off the round ball season are: Jimmy Jones, Basil Sexton, Robert Meade, Windell Meade, Robert Wright, Jimmy Blair, Rex Polly, Billy K. Banks, Sonny Webb, Carl Hall, Darrell Stidham, Darrell Caudill, Tommy Fields, and Morrell Blair. We are off to a successful season so let’s back the team and go to all the games — even on Tuesday nights, when we should be studying for that Chemistry test. By the way don’t wear too heavy clothes to the game, unless you can take off a sweater, because the gym gets much warmer than the football field.

This week is Visitation Week and National Education Week. The Speech Class is putting on a program for the parents and teachers Thursday afternoon in the auditorium. The leader of this group is Mrs. W.B. Hall, and very outstanding in this field. Oh, yes, your truly makes a speech, for the benefit of Better Schools, so come out and hear the student’s view points on education.

All you hear at school is when are the Seniors getting their class rings? This time last year some of the students had had their rings a week or two. Naturally we are anxious to get them.

This weekend is the Big Sandy Football game. Anna Louise Daniel, our candidate, has missed a day of school, so we figure she has been shopping for an eye-catching dress. Best of luck, Ann, on this your big day. The band will be there to support you, right behind the reigning queen, our own Ramona Lee Sparks.

The majorettes, cheerleaders and I have been invited to Lexington to a Majorette and Cheerleader’s Convention, to receive instruction from Don Wilson on twirling. That night we march with the U of K band. This will be a good chance to try out for a majorette scholarship. Watch this column for results of our trip.

The Southeast School Assemblies presented a program of Marionettes on Wednesday afternoon. Rumpelstiltskin.

“Kitten of the Month”

The Black Kat Staff has chosen for the Kitten of the Month, Judith Combs. Judy is 14 years old; 5’4”, and weighs 108. She has light brown hair and brown eyes, and was Valedictorian of the 8th Grade graduating class. Her ambition is to be a secretary. Her favorite food is hamburgers; color — purple. Her feller – get this “NONE”. Song: “Seventeen”. Men, this is one of the cutest single Freshwomen in our W.H.S. Let’s watch out for her.

(The above article from the September 1955 Black Kat Newspaper.)