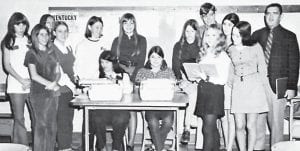 Class History, Part 4-Senior Year: Our class officers this year were Woody Holbrook, President; Carl Breeding, Vice-President; Joan Ramsey, Secretary; and Don Hogg, Treasurer. At the first of the school year we had our annual magazine drive for the senior trip. We sold over $7,000 worth of magazines. Our top sales personnel were Johnny Mounts, Nancy Boggs, Charlene Williams, and Debby Bates.

Many “happenings” have taken place this year. This is the first year we have had three senior homecoming queen candidates. They were Lee Anna Collins, Nina Sturgill, and Gwenda Watts. The student body elected Nina as the reigning queen. Thanks to the Student Council with Caron Crawford as President, this was also the first year we have dropped the dress code. (Let’s hope it was not the last.)

We would like to thank Mrs. Richardson for sponsoring the new girls’ track team. We are very proud of them for placing fourth at their first track meet having had only one day of practice. We would like to congratulate all of the athletes for their performances, especially the seniors. The senior football players were Tony Baker, Carl Breeding, Ray Fields, Bill Howard, William McCool, Gary Mullins, and last, but not least, Danny York. These fine players along with their coaches, James Gose, Carter Bradshaw, and Jerry Coots, brought home the Eastern Kentucky Mountain Conference championship for the first time in 12 years. An extra round of applause for Bill Howard and Danny York who were named all E.K.M.C. We regret that we can claim only two basketball team members from our class, but Don Hogg and K.O. Holbrook did very well working with the rest of the team, coached by Lyle Eads, they won for us the District Tournament for the first time in eleven years. Both the football and basketball teams were cheered on by a cheered on by a cheerleading squad consisting of only one senior, Donna Childers. 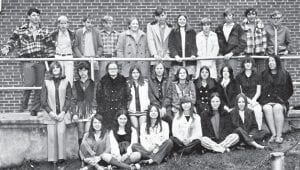 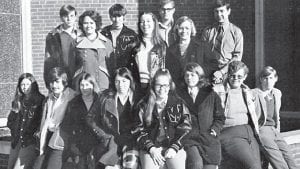 The seniors were thrilled when it came time for the Key Dance and Ring Dance. Who would not be excited about getting his senior key and class ring? The most excited people at the Ring Dance were Gary Mullins and Lee Anna Collins who were chosen Ring Dance King and Queen. Mr. and Miss Whitesburg High were Randy Breeding and Nina Sturgill. Teresa Baker reigns as Miss Yellowjacket.

We have two essay winners in our class this year. Kim Adams won the Employment of the Handicapped Essay and Randy Breeding won the Soil Conservation Essay. We are proud of Randy Breeding, Teresa Baker, and Johnny Mounts who went to Clinch Valley College for a math contest and came back with a first-place trophy for the team. Randy also came back with a first-place trophy and a scholarship for himself. This year our class is especially proud to claim two valedictorians, Randy Breeding and Teresa Baker, both with a four-point standing.

Student Teachers: There are two student teachers teaching under Mr. R.T. Holbrook. Mr. Timothy Wayne Rash from Fleming-Neon is a student at M.S.U. and majoring in sociology. He plans to start on his master’s degree after graduation. Mr. Jerry Bryant is from Hazard. He also is a student at M.S.U. and majoring in sociology. Mr. Bryant plans to teach after graduation. Both Mr. Rash and Mr. Bryant said they enjoyed teaching here. One of the new student teachers for Mr. Bradshaw is Donald Ray Slone. He is attending Morehead State University where he is majoring is chemistry. He wants to teach chemistry in Knott County, which is where he is from. Another student teacher, teaching under Mr. Bradshaw is Mr. Sam “Trey” Quillen III. He is attending M.S.U. where he is majoring in biology. He says he enjoys teaching here. His special interest is boating and fishing. Mr. Quillen and his wife, Anna, are living at Neon. He is undecided about future plans. Mrs. Glenna Wright Matney is Mrs. Juanita Day’s student teacher. Mrs. Matney is here from M.S.U., where she is majoring in art. Mrs. Matney was a high school graduate of Fleming-Neon High School. When ask what she thought of the student body at W.H.S., Mrs. Matney replied, “The majority of them are extremely friendly and nice.”

(The above articles from the 1972 Yellowjacket Yearbook and Black Kat Newspapers.)