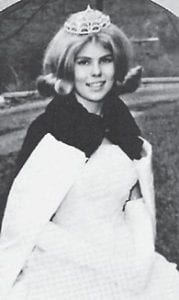 The colorful parade, the return of the alumni, and school spirit at its peak were the highlights of the day.

At last the night ceremonies began. The freshman candidate, Jan Yinger, who was escorted by Ronnie Halcomb, was crowned Homecoming Queen and an exciting gridiron game with Elkhorn City was enjoyed by everyone.

Curtis Niece – Curt, has played regular for three years. Pound for pound, he is one of the toughest boys I have coached. Hoover Nease – Hoover isn’t a very big boy to play in the line, but he gave his 100% all the time. He was a pleasure to coach. Bobby Blair – Bobby possesses a fine throwing arm for a quarterback. He only played one year. Lack of experience hurt him. I feel if he had had another year, he would have been one of Whitesburg’s better quarterbacks. Johnny Bill Brown – Johnny, another boy who didn’t play much last year, so lack of experience hurt him also. Moving him from one position to another hurt, but as the season progressed, Johnny improved game by game. A good, steady performer. Larry Freeman – Larry played defense for us. He did a creditable job. Ronnie Halcomb – Only came out last year, this hurt his development, but for his size he did a good steady job. 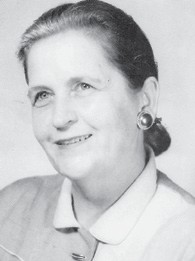 Belvia Short to Ray Hatfield – “You’re The One”; Jearl Adams to Hearl Kell – “But You’re Mine”; Joyce Niece to Jr. Crase – “Make Me Your Baby”; Donna Hart to Jack Howard – “My Heart Sings”; Joann Trimble to Sam Trimble – “I’m Yours”; Barbara Kincer to Larry M. – “For Your Love”; Nina Morgan to Dean Fields – “I’ll Make All Your Dreams Come True”; Mr. Fields to 4th Period – “I’m A Happy Man”; Students to Teachers – “Let’s Hang On”; Mrs. Comb’s 6th Period to Warren Hall – “Everyone Loves A Clown”; Imogene Caudill to Roy Troutt – “You’re The One”; Mr. Maggard to Bookkeeping Students – “Just A Little Bit Better”; Billie Webb to Cecil Howard – “I’ll Make All Your Dreams Come True”; Carolyn Lucas to Ervin – “You Were On My Mind”. 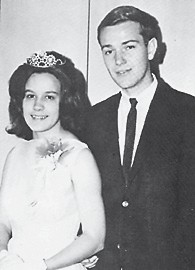 The seniors enjoyed one of the highlights of the year on Saturday night, Nov. 13, in the gymnasium.

Mr. Burkich crowned Linda Biggerstaff, Queen and David Jones, King of the dance. Miss Biggerstaff is the daughter of Mr. and Mrs. Ray Biggerstaff of Whitesburg. Mr. Jones is the son of Mrs. Mae Jones of Cumberland.

Each senior walked through a beautifully decorated ring to receive his long awaited ring.

The Black Kat welcomes Mrs. Janice Hamblin to our faculty as our home ec. teacher. She graduated from Eastern State College and holds a B.S. degree. She formerly taught in Indiana. After her marriage, May 20, she moved to Hazard where she now lives and commutes to Whitesburg. 5’ 5” with hazel eyes and blond hair, she is a very attractive person. Her favorite poet is Robert Frost and her favorite books — logically are cookbooks.

Mrs. Hamblin has traveled through the eastern states and she likes Florida and Pennsylvania the most. The Black Kat asked her how she likes our school. “Fine” she said, “but it seems small compared to the ones in Indiana.”

Teachers we welcome back to our faculty after a year’s leave of absence include: Mr. and Mrs. Bob Gatton, and Mrs. Anne Lewis Banks. Mr. Major Sparks, our new typing teacher, graduated from Pikeville College, with a B.S. degree. His favorite sport is football; favorite hobby, fishing; favorite book, “Gone With the Wind”; favorite poem, “The Raven”; favorite food, steak.

He has traveled some but has no one favorite place. He is married — so, girls, you’re out of luck. His wife’s name is Ella Louise. They have no children.

Asked how he likes W.H.S., he replied, “Very much, since it is the high school I attended. It is my alma mater.”

Miss Elizabeth Craft, a graduate of Eastern State College with an A.B. degree, is our new speech and sophomore English teacher. She is not married, so, boys, here’s your chance! Her favorite poet is Edgar Allen Poe; book, “Lords and Flowers”; hobby, acting. She doesn’t have a favorite food but her drink is coff ee.

Miss Craft has traveled in California and says it’s a wonderful state. Her feelings toward Whitesburg High: She loves it!

Mr. Jimmy Follace Fields is a graduate of Virginia Polytechnic Institute with a B.S. degree in biology. His wife is Nelda Fields and they have a daughter, Leslie. He does not have a favorite poem, but reads mostly novels. His favorite food is steak. He last taught at Fleming-Neon. Mr. Fields, we welcome you.

Mrs. Baker, our new band director, graduated from the University of Kentucky with an A.B. degree. Her favorite poet is Edgar Allen Poe, her hobby is cats. In sports she likes hunting and target shooting. Steak is her favorite in food. Of all the places she has gone, she likes Bad Branch Falls the best. She likes anything to do with music, and her plan for the band is to keep them playing until they get another director.

Mrs. Kathryn Roberts, our new secretary, is a 1952 graduate of Whitesburg High School. She is married and has one son and one daughter. Her favorite in food is plain old country food! Asked why she likes our school, she said that it was where she met her husband. She formerly worked at the Federal Reserve Bank in Louisville and at the Whitesburg Grade School as a secretary. I’m sure everyone is proud of her work because she can surely get around.

In gratitude for your scope of interest, your versatility, your originality, your affable personality, your sympathetic nature, and your dedication to Whitesburg High School, we proudly dedicate the 1966 Yellow Jacket to you, Virginia Combs.

Steve Frazier was named “Athlete of the Year” in both football and basketball at the annual athletic banquet at Whitesburg High School.

Frazier also received a trophy for making the most successful foul shots in basketball.

Gary Boyd received a trophy for the best rebounding in basketball.