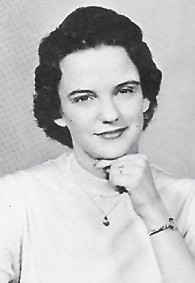 To one whose charming personality and friendly smile has won her a place of honor in the hearts of her students and the faculty. For her determination, her cooperation, and her loyalty to us as a teacher and a friend, we — the Annual Staff — take honor in dedicating this, the 1962 Yellow Jacket, to: Ida Cureton Wright.

Delora Sue Cook, a very sweet and attractive young lady, is the valedictorian of the class of 1962. She belongs to the Beta Club, Science Club, Bible Club, Nurses Club and F.T.A. Delora is a straight-A student and we are all truly proud to have such an intelligent person to represent our class. Delora plans to attend Morehead College and take teacher’s training.

Our salutatorian is a very sweet little blond, blue-eyed young lady, Mary Ann Adams, with a high standing of 3.875. If you should ever need anything done, and done right, she is the one to call on. She seems to always know how to start a conversation anytime, anywhere. She is a fine, talented, lovable student. She is artistic and with aesthetic ability. She will study nursing at Good Samaritan Hospital next year in Lexington. 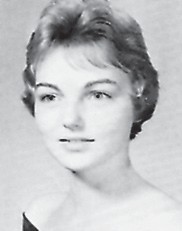 This will be one which will inspire creative writing. It will be an honor to have your work appear in it. The title of the booklet is “Lit, Wit and Logic”. The name was suggested by Delma Gilley, Class of 1962, who received $5 for her suggestion.

The following writings are from the second edition of this publication:

“An Ode to a Teacher” 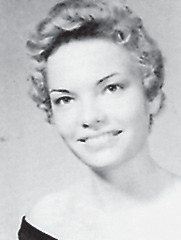 I am n ot hing./ I ha v e sacrificed myself that today might live./ Let not my sacrifice go unheralded, unnoticed./ I am a dream awaiting fulfillment; a hope, untarnished./ I hold the promise of the future within my grasp,/ Be it good or bad,/ Only the gods shall know./ Next week, next year, I shall be a memory fading with the passage of time./ I am nothing, for I am tomorrow.

”Report Cards”
by Stella Fields
Report card day is the saddest of all,/ It makes me sit and bawl./ That’s the day I dread worse,/ It almost makes me want to curse./ When I give my card to Mother,/ She makes me wish I were my brother./ Then she looks at me very sad./ I tell her I’ll stop making bad./ That’s the day I dread, I wish I were sick and in bed./ But things are that way,/ On this dreadful report card day.

They say he faded like a flower,/ But yet, tried so hard to stay./ We hated so to give him up,/ But God called him that day./ That day should have been wiped out of history November 22, 1963, was that sad day./ Tears came from everyone with broken hearts,/The world was shocked, not knowing what to say./ He lived with his family in the great White House He belonged to the world, too,/ He loved and served his country./John F. Kennedy was the man we felt we personally knew./ After he left this great land,/To live in his heavenly place./ Another inauguration was held with Lyndon B. Johnson to take his place.

The homes all around are glowing with bright./ But when the Savior was born,/ Only the star gave light./ The wise men were anxious to find the way,/ To the manger where our dear Savior lay./ There in the manger with straw for his bed,/ Our Savior lay sleeping, no pillows for his head./ Mary and Joseph were proud and delighted,/ To know little Jesus was perfectly all right.

A tiny drop dampens my cheek;/ It’s cool and nice/ Now they are bigger; /Each one splashes my face and hair with moisture./ Heaven releases its bolts and flashes,/ Torrents drench me to the bone and plaster./ My hair around my face./ The wind chills my very soul./ I rejoice./ I’m happy,/ As I stand like a statue with rivers of water,/ Streaming through the grass at my feet./ I feel a cool, clear spirit coming over me./ It is as though God Himself was cleansing my dirty soul and world covered body./ Now I am clean./ I am cool./ I am free./ It has rained and I have rejoiced.

The oaths have all been taken,/ The promises have all been made./ Pennsylvania Avenue seems lonely,/ After the festivity of the Inaugural Parade./ The benches around the Capitol,/ Are empty and bare today./ Already their importance forgotten,/ In the echo of the last hurray./ The glitter of the Paris fashions,/ That sparkled in Washington last night,/ Are hidden away in closets,/ And protected from society’s spotlight./ The pageantry is finally over,/ But a memory for the next four years./ When again the Inaugural will follow,/The joyful victory tears.

While walking down life’s highway,/ I met a lonely man,/ Whose clothes were worn and torn,/ Unminded by a loving hand./ His eyes shown of sorrow,/ His tears could flow like rain./ The heart he had was broken,/ And his pride had suff ered pain./ But yet he asked no pity,/ Nor trusted a helping hand./ He trusted not a friendly sign,/ Friendship to him was banned./ Once he had a loving friend,/ Whom he trusted with all he had./ But the friend was not worth trusting,/ and his story ended sad./ So now he’ll keep a’ wandering,/ Searching alone for the things he’s not had./ A person whose heart isn’t made of paper,/ Who can take the good along with the bad./ ‘Tis sad to be a lonely man,/ True friendship never to know./ A lonely, lonely wandering man,/ Who moves as the four winds blow.

The speech class of Whitesburg High School presented a Hillbilly Farce in three acts by Seroma Greth. The play was presented in the Whitesburg Grade School Auditorium on Thursday, February 1, 1962 at 7 p.m.

The senior class of Whitesburg High School presented their play “Crewcuts and Longhairs” on March 27, 1962 at 7 p.m. The Setting: The action of the play takes place in the living room of the home of Sam Vigor, the football coach of a small Southern high school.