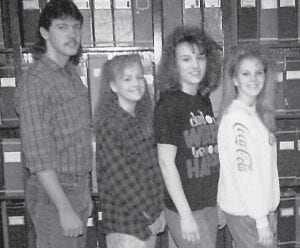 Although Whitesburg High School was always her rival, she finds the students are more concentrated on their schoolwork and have more respect for themselves as well as their fellow classmates than what she had anticipated.

The Whitesburg Chapter of Future Homemakers of America attended the Fall Regional Meeting at Lees Junior College Sept. 27, 1989. The purpose of the meeting was Officer Training Sessions. Regional Officers from nine counties, chapter officers from fourteen chapters, and advisors attended this meeting. Guest speakers were the State Secretary and State Treasurer of FHA.

This week was a landmark time in Letcher County. It not only marked the beginning of fall on the Autumn Equinox, the 22nd, but it also brought us to the end of the Mountain Heritage Festival. As the festival ended, we also saw the completion of the remaining tournaments. Included in these was the annual Mountain Heritage Chess Tournament.

The first cross-country meet of the 1989-90 season was held Sept. 9 at Asbury College.

The girls’ team finished seventh out of ten schools. They were led by the fourtime all-state runner Shondra Cates, who finished forty-first out of 150 runners. Other top finishers were seniors Lisa Wilcox, Heather Swisher, and Kathy Sparks.

The second meet of the season was held at J.J. Kelly High School in Wise, Va. The girls ran well, winning first place with a total score of 17, which was twelve points away from a perfect score. The team leader, Shondra Cates, came in first place. Heather Swisher, Amanda Boggs, Lisa Wilcox, Kathy Sparks, Hillary Swisher, and Rene Miles all placed in the top ten.

Mr. Craft married Michelle McCall on June 10 of this year. Some of you may remember Ms. McCall as a secretary for the guidance counselors.

Mr. Craft loves Whitesburg High School. He feels like it’s his home. He gets along with the teachers and students. He feels that he isn’t new anymore; he’s just a part of the school.

We, the staff of the Jacket Journal, would like to welcome Mr. Craft to our school and wish him a great first year.