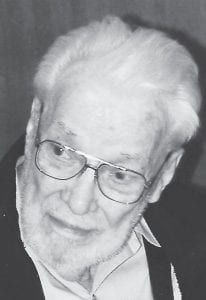 doctorate given at U.T.;

Dr. Marion Lewis Picklesimer: Born to Virgil Dennis Picklesimer and Geneva Picklesimer in Thealka, in Jan. 1920, he was a small town boy with a hunger for knowledge and a dream of studying science. In his quest for math and science training, he attended schools in Paintsville, Jenkins, Fleming, and Whitesburg High, where he graduated in 1936. But his longrange dreams had to wait. The most widespread and destructive war in history began, and he had to answer the call. It wasn’t long until he found himself in an intensity of combat that no man should endure, and a few men ever experience. As a bomber co-pilot and later as pilot, he flew 50 times through the gates of hell, 50 times through the valley of the shadow of death. But, each time he returned to base uninjured. Each time, he brought his plane and his crew home safely. Each time, the hand of God was upon him.

Even though he was never physically injured, he faced unimaginable emotional trauma. Well more than 50 percent of the teammates who entered the war with him in January 1943 were killed or captured by July 1943. Only one who has felt the loss of a friend in combat can even imagine the pain of losing so many friends so quickly. Replacements for those lost friends came and were themselves soon lost in combat. There were so many replacements and they were lost so quickly that we soon stopped trying to make friends with them. Their loss only added to this pain. He seldom speaks of the war, but when he does, the stories are chilling . . . stories of flying with a few feet of the ocean so attacking fighters could not fly below his plane, stories of hundreds of German fighters attacking his six-plane formation, stories of skip bombing enemy warships and being so low that exploding bombs blew his plane into an almost vertical nose-down position and of pulling the plane up just as the propellers touched the water. After 50 missions, he was finally sent home to pursue his dreams, but he was forever changed.

During his 35-year career as a world-renowned scientist, Dr. Picklesimer was an adjunct professor at the University of Alabama in Birmingham and in Tuscaloosa. He was a researcher in nuclear fuels for the Nuclear Regulatory Commission, and before that, an expert in nuclear reactor safety for the Atomic Energy Commission. Over the years, employed by the National Bureau of Standards, Southern Research Institute, and Oak Ridge National Laboratory, he conducted and led many others in research projects involving steels, technetium, aluminum alloys, copper alloys, titanium alloys, zirconium alloys, and superconducting materials. For most of those years, he researched and studied the element zirconium, its corrosion resistance properties, and its uses in nuclear reactors. He was recognized in 1983 as the international expert in zirconium by the W.J. Kroll Institute. During his career, Dr. Picklesimer won six patents and published about 60 technical papers.

Dr. Picklesimer is the father of three children. Judith, the oldest, married a career army officer and had one son. Russell, a career helicopter pilot, flew gun ships in Vietnam for two tours. Alan, a computer and program management specialist, was a paratrooper and military policeman. Alan also had one son. Dr. Picklesimer’s hobbies included antique clock repair, fishing, and a voracious appetite for reading.

Combat aviator, scientist, engineer, and father, M. L. Picklesimer embodies the finest of the independent spirit of the people of the hills of eastern Kentucky. He is an unsung American hero!

(I wish to take this opportunity to express my gratitude to Dr. Picklesimer and his family for sharing this article with me and our readers.)

Though Monday was Labor Day, a national holiday, early that morning lively things were going on at the high and graded school grounds on Old College Hill. Students old, young and indifferent were pouring in from town and country, happy and glad that the loafing days were over and schoolwork was on hand. It was estimated that no less than 700 persons and others interested gathered.

The first event of the day was when nearly 400 boys and girls, high school students, gathered in the high school auditorium to listen to short talks and otherwise take in the situation. Standing on the stage and looking over the sea of faces the writer never observed a more fascinating picture. Every face glowed and every eye beamed with happiness. Apparently every one realized that they were occupying positions, the greatest that can come in that particular state of their careers — the stage that must bring to them success or an ignorable failure.

The next scene of the morning was over at the graded school building when the whole student body assembled. The auditorium as well as every other available nook and corner was jammed. Some interesting talks were made. There was music both instrumental and vocal and then an interesting and instructional talk by Hon. Emery Frazier, who recently returned here from Washington. All the teachers for the year’s work were introduced followed by loud cheers. This over, registration for work was done and the mass of students hustled away to be ready for their tasks on the morrow and the hereafter.

Playing before one of the largest crowds ever to witness a local high school game, the Whitesburg Yellow Jackets and the Fleming Pirates, cream of Letcher County’s football crop, battled to a scoreless tie at Lewis Field here last Friday.

The contest was packed with thrills from beginning to end, reaching a climax in the third quarter when the Pirates produced the only real threat of the game with Disney tossing a long pass to Hill who was downed on the Whitesburg 4-yard line, but the Jacket defense held and Whitesburg took the ball on downs, after which Pigman kicked out of danger.

Coach Vaughn presented one of the best backfields to be seen here in quite a while. Coach Tolliver’s Jackets were greatly weakened by the loss of Smallwood and Bach, neither of whom could play due to injuries. The Whitesburg line, led by a pair of 190-pound tackles, Wise Frazier and Capt. Earl Amburgey, played great football throughout the contest. The boys from Fleming outnumbered the Yellow Jackets in first downs, making 8 while Whitesburg was tallying 6.

Next Friday, Coach Tolliver takes his boys to Hazard for a match with the Bulldogs and the Yellow Jacket supporters are optimistic over the Jackets chances for their first win over the Bulldogs since 1931.