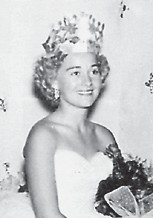 Tuesday, Nov. 16, at an assembly program at Whitesburg High School, Coach Ed Moore presented to Mr. Kendall Boggs the E.K.M.C. Runner Up Trophy, which the Yellow Jackets won. This trophy was presented to the Yellow Jacket team at a meeting of representatives of the Conference at Pikeville on Nov. 14. All Conference, Buddy Fields and Don ‘Lightning’ Caudill were called to the platform and given miniature gold All Conference footballs for the E.K.M.C. 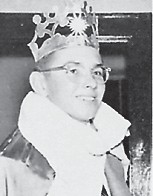 At this meeting, the Whitesburg School band was also honored and Mr. Jack Taylor, Band Director, presented to Mr. Boggs and the students a trophy, received at the Big Sandy Bowl on November 12, for being the best marching band. The band won this for their precision marching routine of “Over the Waves.”

The band competed with the following bands: Fleming, Pikeville, Belfry, Kermit, W. Va., Paintsville and Cumberland. They were judged by ‘Mr. Pound’ of Morehead State College. The band participated in a parade of bands and floats honoring the Queens of the schools represented and preceding the Big Sandy Bowl football game.

Queen of the Big Sandy

Whitesburg’s favorite, Miss Ramona Sparks, of the junior class was chosen Queen of the Big Sandy Bowl for 1954 and was crowned by Miss Kentucky. This is the second time that Whitesburg High School’s candidate has won this honor.

Mr. George D. Wheeler, representing the Kentucky State Young Men’s Christian Association, spoke to the students concerning the forming of a Hi Y organization at this assembly program. Further plans will be made.

“Dora Dean,” a three-act comedy drama, the play for the class of ’55, which is being directed by Miss Vera Raleigh, will be presented on April 6 and 7. The April 6 presentation will be for the grade school students at 9:30 a.m. On April 7 the play will be given for the high school at 9:30 a.m. and again at 7:30 p.m. The public is cordially invited to attend any of these programs.

The 1954 Halloween Carnival was held on October 26. Phyllis Ann Hall and Don Woodford Webb, junior class candidates, were crowned King and Queen of the Carnival by Principal Kendall Boggs.

Margaret Collier and Maurice Moore were the senior class candidates. Representing the sophomore class were Dixie Adams and Ben Arnold Everidge. Bobby Kersey and Bix Brown were the trainbearers.

We are proud of the Speech Class and their coach, Mrs. W. B. Hall, who has worked tirelessly with them. To us it is quite an achievement to have made such a good showing the first year that our school has ever entered a speech festival.