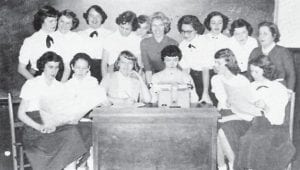 The following names have been suggested for Jack Taylor’s Orchestra: Mickey Bowen submitted “Star Dreamers”, Leslie Pennington, “The Hypsters”. Other Suggestions are “Jack Taylor and His Easterners” and “Taylor’s Troubadours”, “Kentucky Cardinals” and “Taylor’s Warblers”.

The orchestra will play at the Colonial Club at Hazard Saturday night, April 9, and at the VFW Whitesburg on the 16th, schedule alternating from one club to the other each Saturday night.

(The above article from the April 7, 1955 Mountain Eagle)

The Betty Crocker Homemaker of Tomorrow in our school is Peggy Joan Yontz. She received the highest score in a written examination which tested the homemaking knowledge and attitudes of the senior girls in the graduating class. She will be entered in competition to name this state’s candidate for the title of All-American Homemaker of Tomorrow. She will also receive a golden award pin, cookbooks for herself and the school. 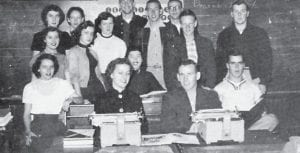 Peggy is a senior at W.H.S. She was a four-year member of Mixed Chorus; Pep Club, two years; F.H.A., four years; Beta Club, senior year; and Speech Club, one year.

(The above article from the March 3, 1955 Mountain Eagle)

This week marks the beginning of the Commencement Exercises of Whitesburg High School for the class of 1955. The Baccalaureate Sermon will be preached by the Rev. Clel B. Rodgers, pastor of the Baptist Church, on Sunday night, May 15, at 7:30 p.m., in the Gymnasium.

The Graduation Exercises will also be held in the Gymnasium on Thursday night, May 19, at 7:30 p.m. The speaker on graduation night will be Dr. Lyman Ginger, Dean of the College of Adult and Extension Education of the University of Kentucky. One hundred thirteen seniors will be presented diplomas by Supt. W.B. Hall. The valedictory address will be given by Bert Francis, and the salutatory will be given by Doris Banks. 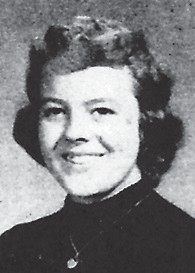 Other events of the week will be a Band Concert on Monday night, May 16, at 7:30, directed by Mr. Jack Taylor.

Tuesday, May 17, 7:30 p. m., the eighth- grade Graduation Exercises. The speaker of the evening will be Rev. E. Hampton Barnett, pastor of the Whitesburg Methodist Church.

Wednesday, May 18, at 9:00 a.m. Class Day exercises will be held for the Whitesburg High School seniors.

Friday, May 20, 7:30 p.m. Music Recital by the pupils of Mr. Hugh Adams. All the events, except the Baccalaureate and the High School Graduation Exercises, will be held in the Grade school auditorium. 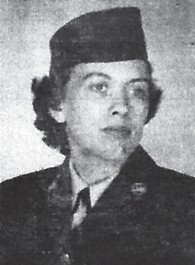 Lackland, situated near San Antonio, is the site of Air Force basic military training for men and women, headquarters of the Human Resource Center, and home of the USAF Officer Military School.

Her basic military training is preparing her for entrance into Air Force technical training and for assignment in specialized work. The course included a scientific evaluation of her aptitude and inclination for following a particular vocation and career.

Miss Reed is a graduate of Whitesburg High School class of 1953.

(The above article from the February 17, 1955 Mountain Eagle)

Coach Ray Pigman of Whitesburg High School has been named an award winner and member of Bike Web Century Club for his record of 163 victories in basketball. 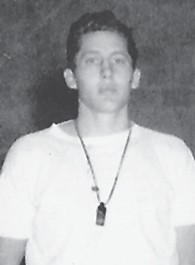 The honorary organization is open to any college or high school coach whose athletic teams have won 100 or more contests in any sport.

William Matthei, coach at Bayview High School, Milwaukee, received the first award. He qualified by coaching cross-country teams that had won more than a total of 100 meets.

Matthei originally suggested the idea of the Century Club in a letter to Sports Trail, a monthly newsletter edited by Arch Ward, sports editor of the Chicago Tribune, and published by the Bike Web Co.

It was Matthei’s hope that perhaps some unknown coach who had done an outstanding job in school sports might get a justly deserved break from this type of recognition.