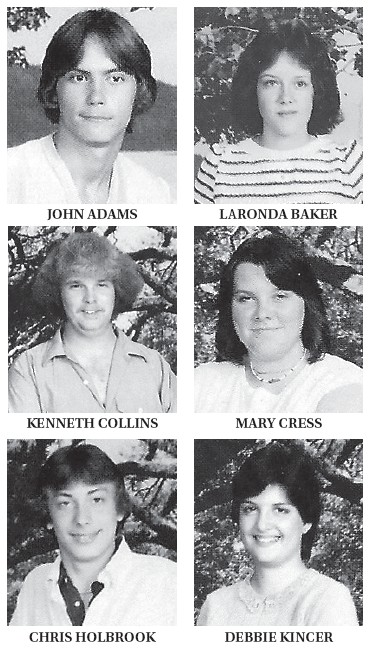 Prophecy for the
Class of ’83 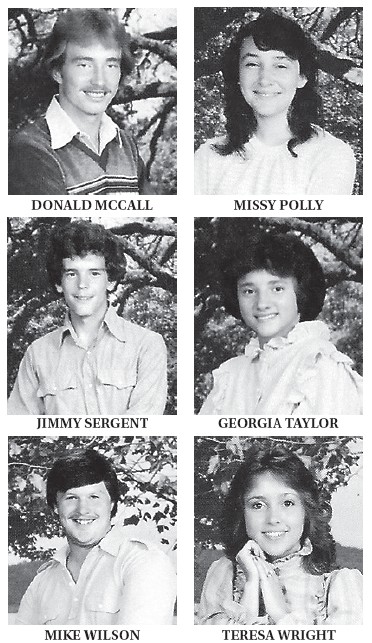 The year is 2003 and the Whitesburg High School Class of 1983 has just had its 20-year reunion. We, D.A. Combs and Mister Polly, have complied an alphabetical list of the class members and their respective occupations.

Betsy Adams has just had her first country hit, called “The Tears of My Heart Run Washed Out the Bridge of My Nose.”

Ricky G. Adams now has his own line of fishing rods and reels called E-Z Catch.

Barry Amburgey is the proud owner of Whitesburg’s second McDonald’s.

Mark Bates landed the Space Shuttle 797 on Mars three years ago and is now trying to find his way back.

Gary Boggs became the first USFL football player to have his jersey retired. No one else wanted the number after he finished.

Patricia Baker is now in charge of the Red Cross in the Eastern United States.

Tiphanie Bates is now doing M&M’s commercials, her one line being “Bok! Bok! Thanks Easter Bunny!”

Jimmy Benson is responsible for Mark Bates being lost. He told him to take a right turn instead of a left.

Judy Bentley is writing her autobiography.

Rhonda Bentley is now a hairstylist at Command Performance.

Barbara Boyd now lives in Pittsburgh, Pa., and is vice president of a steel company.

Heather Bradshaw lives in Louisville, and is an avid Louisville fan.

Tommy Brashears now owns the Ford dealership in Whitesburg and is in direct competition with Timothy Brown, who owns the GM dealership.

The annual student-faculty basketball game was held on Monday, May 2, pitting the seniors, winners of the interclass tournament, against a team composed of some of the school’s more athletic faculty members.

The seniors made it into the game by first defeating the juniors, and then the sophomores. The teams were composed of students who did not play on the school’s basketball team.

The seniors vs. faculty game was a very physical one, with most of the fouls being called against the seniors. The senior team, ably coached by Donald McCall and Mark Powell, got into foul trouble early in the game, but still managed to hold a comfortable lead at halftime.

Not to be outfoxed, faculty coach Buddy Roe apparently gave his team some much-needed words of encouragement during halftime. Though crippled by the loss of Mr. Henrikson, a major factor in last year’s faculty win, the faculty team managed to pull out another victory in overtime.

The new vice-principal, Mr. Slone, showed what he was made of, sinking some crucial baskets in the second half. Slone stole the show with a deadly series of baskets from the foul line area and also pulled down a few rebounds.

The game was a very exciting one, and it was a tough contest right down to the wire. The faculty team won by a 5-point margin in overtime.

The English Department has dropped the “Classics” course, a grueling nine-week course in which students read several books considered to be masterpieces of world literature. Department Chairperson Mrs. Lester says that the books normally read during Classics will be absorbed into other English classes. The nine-week spot previously occupied by Classics will be filled by Grammar III, which Mrs. Lester says will help boost the ACT scores of WHS juniors and seniors.

Students provide their definition of Friendship Is . . . Candi Banks-A big hug at the end of a bad day. Judy Wright-Being there during the good and bad times. Donald Blair-Having someone you can go to with your problems. Angie Brashears-Listening when I needed you. Renna Sexton- Being together at special times. Missy Starnes-Caring for the other instead of yourself. Carolyn Frazier- Having someone to cheer you up when you’re blue. Jim Sergent-Someone to do things with when you get bored. Monick Wampler-People who are always there for each other. Michelle Ihrig-Being able to confide in someone. Tabitha Mullins-Finding comfort in a friend’s words. Mark Sturgill-The special closeness between two people. Mark Boggs-Sticking together through thick and thin. Peggy Wagner-Being able to keep a secret. Jamie Estep-Having a shoulder to cry on. Pat Sturgill-Sharing your blanket with someone at a cold game. Debbie Imperial-Sharing your Coke with someone that has a cold.