Twenty Whitesburg High School students are in Central Kentucky this weekend taking part in a folk-dance festival and the Kentucky Youth Assembly.

Freddy Bowen is a candidate for lieutenant governor of the Youth Assembly, which is meeting in Frankfort and Louisville.

Others from the school who are attending the sessions are Andrea Collins, Russell Hall and Randy Fields of the Hi-Y Club; Kathy Stallard, Liz Smith and Cecilia Newsome of the Tri-Hi-Y; and Miss Anne Lewis and R.T. Holbrook, chaperones.

The Youth Assembly, sponsored by the state Young Men’s Christian Association, is designed to give young people experience in the operation of state government.

The folk dancers are appearing at the 28th Mountain Folk Festival at Berea College. The festival is held to encourage the use and preservation of the Southern Appalachian folk heritage . 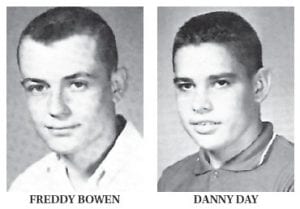 (The above article from the April 2, 1964 Mountain Eagle)

Danny K. Day won second place in a poultry project contest at the annual meeting of the Cumberland Federation Future Farmers of America’s annual meeting last Saturday in London. Danny is a junior at WHS this year.

What can be done about morning devotions?

Part II: Cecelia Newsome It is getting to the place where we the people of the United States are losing the rights we started out with, and came to this country for. We have really lost a right with a lot of us, when we lost the right and privilege of Bible reading.

Aleene Hatton-The mornings just don’t seem to start off right without the daily devotions over the intercom each morning. Whatever could be done should be done immediately. Not everyone has a church to attend and it helps reassure us when we hear the devotions early in the mornings.

Charlotte Holbrook-I think it is a shame that everyone has to suffer because what some believe. People say we should consider all people’s faith. We just can’t give up ours, can we?

Sherry Conatser-Should we stand and do nothing? If we don’t do anything about our devotions, later years religion may be barred from our lives completely. Maybe if we can’t have devotions, suppose we ask Mr. Burkich to have silent meditation each morning and each student can pray in his own faith. There would be no embarrassment for anyone and no one would be offended.

Steve Yontz-The only thing we can do is wait. We must wait until we are of legal voting age and choose better leaders than our parents have. The law forbidding Bible Reading and prayer in public schools had to pass through both houses of congress in the nation and in the state. If these people had the imitative and common sense to find out what the people wanted, they could have obeyed the majority and stopped this law. Somewhere in the U.S. there are politicians with the courage to stand up for the right of the people. When this man is elected and supported, he will show us what can be done about it

Mr. Rader wants to thank the teachers for taking his classes while he was ill and unable to be in school. Everything is sailing along smoothly, except for table tennis, which was cancelled due to lack of money in the department.

Since the last paper we have had co-educational P.E. II, that is the boys and girls have been working together. I think the folk dancing and badminton programs were enjoyed by all. These students were winners and standout players in badminton: Howard Couch, second period; Gay Amburgey 3rd period; Anthony Holbrook, 5th period. Ellen Armstrong, Bernetta Holbrook and Janet Hart, P.E. II. Frank Campbell and Robert Caudill, 1st period; Larry Sparks, Stephen Combs, 4th period, P.E. I.

Boxing for both programs are in full swing now. Some of the better boys have been: Charlie Kiser, Jerry Shepherd, Robert Caudill, Jerry Pease, Dwight Hogg, Danny Webb, Bruce Preston and James Vlasnik.

Student of the year in the following are

Roger Adams-Stay away from Mr. Ritter. Charles Craft-Find yourself. Tommy Davis-Live easy, love hard, and die young. Janet Meade-Get Mr. Gatton in something, he is the greatest. Anthony Holbrook- Live while you can. David Craft-Study hard. Virginia Hoskins-If you want to enjoy your classes get Mrs. Wright, Mrs. Gatton and Miss Wampler for teachers. Frank Johnson-Have a ball but study too. Linda Whitaker-Don’t let the first three years of high school get you down-your senior year is worth it all. Juanita Webb-Study hard and stay in school. Patsy Short-Have all the fun you can as long as you can get by with it. Cleatis Combs-Study hard and get everything you can from school. A good education means a bright future. Gloria Craft-Learn all you can for tomorrow you are put to the test. Barbara Craiger-Have fun now-Tomorrow may never come. Carl Bowen-Keep all your debt paid up. James Caudill- Save all of your money for me. Betty Mullins-Work hard, have fun, and make the best out of your school days. Barbara Troutt-Study and start saving money because you will need it when you are a senior. Laura Lawson-Study harder than I did, and become a success. Bobbie Miles-Have all the fun you can and don’t get caught doing something you shouldn’t. Claranda Miles-Don’t get caught skipping school. Lydia Hammonds Get a junior for a boyfriend so they can buy all your senior products. James Salyers-Find you a girl that cares for you and study hard to get a good education. Fern Sergent-Have a ball. Pat Sexton-Every girl should take Home Ec. Charlotte Holbrook-Make the best of your senior year and don’t get caught. Michael Bentley-Live life like today is your last. Ricky Banks- You had better water your money tree because you’ll need it. Walter Day-Be a loud mouth. Harold Fields- Be good. Helen Fields-Don’t take Homer’s English. Sharon Mullins-Get out of life what you can; you’re only young once. Jerry Pease- Don’t fool around. Koni Underwood-Live it up. Collect memories and don’t do anything in private that you would be ashamed to do in public.

My four years at WHS by Alene Hatton

If I had not started in high school and attended four years, I would have missed the best four years of my life. I would never have met the dear friends and teachers who have meant so very much to me.

My school is dear to me and I have been loyal to its name. So, I say, “Long live Old Whitesburg High, and all its students and faculty.”