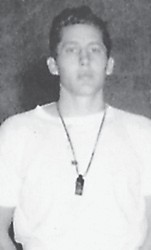 Ray Pigman was an outstanding athlete in football and basketball at Whitesburg High School, graduating in 1938. He attended Georgetown College where he was a two-sport athlete, starring at halfback and earning first-team KIAC honors in his junior and senior years and playing basketball all four years, graduating in 1942.

Coach Pigman taught and coached one year in Pomeroy, Ohio before entering the Navy during World War II. After returning from the Navy, he entered graduate school at the University of Kentucky to work on his master’s degree. After spending approximately a year at UK, he came to Whitesburg High as a teacher in January of 1947. The following fall, he took over the reins as football coach and the fortunes of Whitesburg’s athletics began to rise. With each passing year, the football teams under Coach Pigman gained success and prestige. In 1949, he fielded one of the best teams this area has seen which was undefeated and was the undisputed champions of the Big Sandy Conference. His won and loss record in football over a period of six years, before giving up his football duties, was 40 wins, 12 losses and 4 ties for one of the best records in the state.

In basketball, Coach Pigman gained statewide recognition for flooring teams with speed, precision, and knowhow although they were lacking in height. When he first took over as basketball coach, the Yellowjackets had to divide their practice sessions and games between Stuart Robinson and Fleming since they were without a gymnasium of their own. With that handicap, they managed to capture the district title each year. With this success, the local fans began to support the team and a drive was started for a new gym here in Whitesburg. This project was realized in 1949 in time for the basketball season and the Jackets had a season record of 21 wins and 3 losses.

The following season, Whitesburg experienced its most successful season in dropping only three games to tough opposition while winning 21 besides winning the 53rd District title, the 14th Region title and gaining a place among the Sweet Sixteen in the state tournament in Lexington. In the first round the Jackets of Coach Pigman opposed the tourney favorite, Corbin, and disposed of them after being behind 18 points at the half for a great comeback. In the second round they handily trounced Danville to gain a spot opposite Cuba in the semi-finals. Cuba downed the locals by only 2 points, but Whitesburg was the talk of the tournament. Ironically, Coach Pigman was a member of the first Whitesburg team to appear in the state tournament in 1936 and coach of the Whitesburg entry 15 years later.

During his tenure as basketball coach, Ray Pigman’s teams were winners of the district tourney six times and twice were runnersup. He has had a team in the regional tournament each year that he has been at Whitesburg. His overall record is also one of the best in the state with 151 wins and 55 losses.

Coach Pigman’s teams have always been respected by their opponents because they have received the best instruction in the fundamentals of the game, have been well-conditioned teams with speed to spare and most of all have been endowed with that never say die spirit.

Coach Pigman was at Whitesburg High School from 1947 until 1955. From 1956 to 1959, he was at Trimble County High School as athletic director, assistant principal and basketball coach. Until his retirement in 1978, he spent 17 years as principal of Southwestern Elementary and Junior High School in Hanover, Ind.

Mr. Pigman passed away on December 21, 2000. In 2003, Georgetown College inducted Coach Ray Pigman into its Athletic Hall of Fame.

(The above article from the May 1955 Mountain Eagle and other sources.)

One of the largest receptions ever given a Letcher County group or individual was on hand to greet the Whitesburg Yellowjackets, State Tournament participants, as they returned from Lexington Sunday afternoon.

Traveling in three cars, the “surprise team” of Kentucky’s “Select Sixteen” was met at the Isom stockyards, six miles out of Whitesburg. A motorcade of over 200 cars bearing an estimated 500 persons met Coach Ray Pigman and his Yellowjacket squad, losers to Manual in the consolation game of the state.

The reception planned by Whitesburg fans early that morning, came as a surprise to Whitesburg team members. Only persons traveling with the team who knew of the affair were Principal Millard Tolliver, Coach Pigman, and Assistant Coach Venon Whitaker.

Players first interpreted the huge crowd to be spectators at a bad wreck. One said, “It must be a terrible wreck for there’s the undertaker and the law.” Another voiced, “So many cars, someone must have been killed”.

It was not until they drew closer and saw the black and orange streamers decked out on various cars that they realized it was a reception for them. Orange and black are the school’s colors.

A Yellowjacket senior summed up the feelings of his teammates when he said, “I came within an inch of crying when I heard the school band playing and saw how glad the people were for us. When I thought about being a senior and this my last year, it was hard to keep back the tears”.

Part of the school band had arrived at the scene atop Whitesburg’s shining red firetruck.

The team was escorted back to Whitesburg and was literally given the keys to the city by Mayor Kermit Combs amidst cheering yelled from town folks and school students.

Short talks on the team were presented by Principal Tolliver and Coaches Pigman and Whitaker. The players, who had tripped Corbin, 60-59, crushed Danville, 71-44, and lost to Cuba, 65-62, and Manual 83-37, had little to say.

Shown to the crowd was the trophy presented at the end of the tournament to Tolliver, Yellowjacket forward, for being selected to the All State tournament team. Tolliver was second only to Lewis Snowden of Clark County in the voting for the team.

If I had one wish, what would it be? Janice McClure: that it was not against the rule to court on the hill. Bobby Neice: I would wish for a girlfriend. Mrs. Combs: that all my students would be as good as Peggy Maggard. Alvin B. Webb: that the seats on the school bus were smaller so that I could sit closer to Margaret Adams. Wanda Kincer: that Ronnie Kincer would drop DEAD!!! J.B. Noble: that we had a new Black Kat staff . Gerald Kincer: enough money to last me for the rest of my life. Bob Stout: for school to hurry and go out so I can get married. Clova White: a date with Paul Dean Adams. Alpha Bates: that seniors would have more privileges. Mr. Pigman: that something would be put in the Black Kat besides the courting columns. Betty Lou Webb: a date with J.T. Bobby Maggard: that May 20 would hurry and come. Joe Preston: that Miss Raleigh would have a heart. Jimmy Whitaker: that Mary Susan wasn’t such a flirt. We all wish Carroll Sexton would give the girls a break.

Personality of the month

Attention please, girls. If your have seen a “dream” walking around the campus that you don’t know, it must be Ralph Ogelvie. Probably all the freshmen girls know him but for the benefit of the upper classman, I’ll give you a description of this wonderful man. He is 6 feet tall, weights 145 pounds, has brown hair and brown eyes, and an “out of this world smile.” He takes English, civics, math, and science. He went out for football this year. He’s really something! And boys, by the time he’s a senior, he’ll have every girl on the hill, so watch out.

Kitten of the month

One of the cutest and most popular freshmen girls is Shelia Moore. Everybody knows her. She is Jimmie Bert’s girl. She’s blonde, blue-eyed and charming. Her subjects for this year are English, civics, algebra, and home ec. She’s in the Glee Club and her favorite sport is basketball, naturally. She kept a close account of every goal Jimmie Bert made, and she wears his miniature basketball.

We wonder why Sally and Mattie Fugate love to stay in Neon so much? Perhaps if we asked Tommy Fuller and Cletis Gibson of F.H.S. we could find out. James Harold Brown, the Kat has received information that Rowena Polly is mighty interested in you. Is that good news? Bobby Kincer and Nadine Combs never seem to have any trouble. Keep up the good work, kids. It seems something is causing a lot of trouble between Ronnie and Connie. Could it be Donna Sue Tolliver? Marylene Polly, make up your mind! Who is it, Billy Dean S. or Kenneth M.? Wonder what Gene Giles and Sonny Maggard are so interested in on Pine Mountain? Maybe Barbara and Beverly Rogers could tell?

(The above articles from the March 1951 Black Kat.)