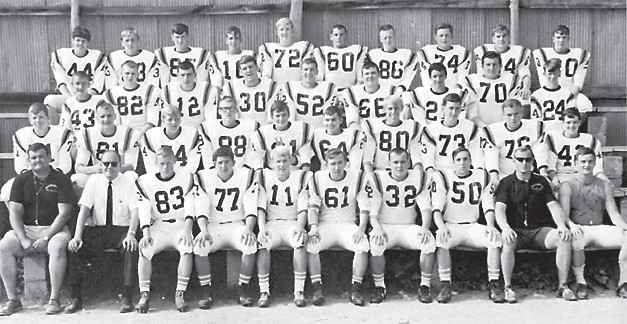 Bouncing off a defeat last week, the Yellowjackets won their final game of the season with an easy 35-6 romp over the Elkhorn City Cougars.

It was the homecoming game for Whitesburg and senior Margaret Hammonds was elected queen.

Before last week’s Prestonsburg game, a memorial service was held for Danny Carl Collins, ex-captain of the Yellowjackets and a 1967 graduate of Whitesburg High School. A plaque from the student body was presented to his parents, Mr. and Mrs. Carl Collins. His jersey, number 80, was placed in the trophy case at the gymnasium.

Mike Hart scored the first touchdown on a 1-yard run plunge. Jack Cox scored the extra point. Cox scored the next three TD’s on runs of one and two yards and a 38-yard pass reception. Cox, Joe Hunsucker, and David Wright scored extra points. Elkhorn City scored on the final play of the first half. Whitesburg had its substitutes in when quarterback Barry Ratliff hit Ray Powell with a 68-yard scoring strike. The score at the end of the first half was WHS 28 and Elkhorn City 6. 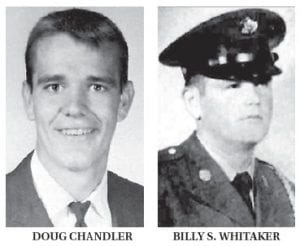 Whitesburg’s coach, Walter Thomas, Jr. allowed his seniors to play the second half and the players tried their hand at various positions and came up with only one touchdown —on a one-yard drive in the third quarter. Jeff Hunsucker scored the extra point. Final score: Whitesburg 35, Elkhorn City 6.

To show Whitesburg’s complete domination of this game, the Yellowjackets gained 242 yards rushing compared to Elkhorn’s 15. Largely due to the TD by Powell, the Cougars gained 86 yards passing but Whitesburg still gained 119 yards.

The leading tackler was Jeff Hunsucker. He was followed by Sam Frazier, Brad Morton, Mike Hart, and George Adams, in that order .

Army Pfc. Billy S. Whitaker of Whitesburg has received the Air Medal with “ V” device as a result of “heroism while participating in aerial flight” in action in Vietnam July 16, 1967. Whitaker is a gunner aboard a UH-ID helicopter. During a surveillance mission near An Khe, his aircraft came under intense enemy fire and he “placed highly effective suppressive fire” on suspected enemy fortifications. He is the son of Mr. and Mrs. George Whitaker of Whitesburg and is a 1966 graduate of Whitesburg High School. He is a barber in Vietnam also. He has been there seven months and in service a year.

He received the award for heroism in combat.

On June 17, during “Operation Billings,” Spec. Chandler was on a mission with his company on the 1st infantry Division to secure a helicopter landing zone in hostile territory. Shortly after landing, his unit was attacked by a strong force of Viet Cong.

During the initial barrage, one of the infantry squads was separated from the main body and was in danger of being overrun. Spec. Chandler volunteered to go with a reinforcement squad to aid the embattled unit.

Th e 20-year old soldier fought his way with the squad through a hall of enemy fire. When they had beaten back the insurgents, Spec. Chandler began searching for casualties and administering first aid to the wounded.

Spec. Chandler is assigned as a combat construction specialist in Company C of the 1st Infantry Division’s 1st Engineer Battalion near Lai Khe.

(The above articles from the 1967 Mountain Eagles)