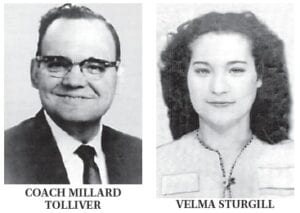 The Home Ec. II Class of Whitesburg High School, under the direction of Miss Ann Dugan, were hosts at a beautifully appointed and delightful buffet luncheon honoring the mothers of the students in the class. The invitations received by the mothers read: “We are having an all-day meeting of the mothers of the Home Ec. II Girls, Friday, March 29. Please come and visit with us and we will try to make your day a pleasant one by having lecture, social hour, and luncheon.” The following mothers were present: Mrs. B.B. Banks, Mrs. Wesley Banks, Mrs. J.C. Black, Mrs. Linsey Webb, Mrs. Pollyanna Cornett, Mrs. Charlie Hogg, Mrs. Susan Webb, Mrs. B.W. Hale, Mrs. Stella Webb, Mrs. Elizabeth Lucas, Mrs. W.M. Carter, Mrs. James W. Collins, Mrs. Alpha Frazier. Other guest included Mrs. B. Edison Lewis, Mrs. Herman Hale, and Miss Martha Potter.

Days gone by while at Whitesburg Hi (By Hal)

The Whitesburg Yellowjackets defeated Jenkins and Fleming for the District Championship and received the trophy. Fleming was the runner-up.

The Yellow Jackets, participating in the Regional Tournament at Hazard, swamped Fleming to a score of 42-30. In their second game they were set back by Hindman to the score of 30-21. Although handicapped this year by not having a gymnasium, the Yellow Jackets made a good showing. They won the sportsmanship trophy at Hazard and they also won it at Jackson last year.

Very little is ever said abut Sanford Adams and the work he does as coach. He breaks all of our ball players in and while they play under him on the “B” team he shows them the ropes. Out of 15 games his team played this year they lost 1 game and they had defeated the same team three times this year. His other records equal the one I have just mentioned. So our hats are off to Mr. Adams.

The Dramatic Club is going to give three one-act plays in about two weeks. They met Tuesday and assigned parts to the dramatically inclined. Mrs. Don Brown directs the High Schoolers and High Schoolettes.

On a tour last weekend Whitesburg defeated Booneville 30-29 on Friday night and were defeated 25-18 by Beattyville on Saturday night.

The game with First Creek was cancelled last week on account of bad weather and is to be played Wednesday night of this week.

The Whitesburg Yellowjackets will meet the Fleming Pirates for the second time Friday night at Fleming.

Miss Elaine Stamper, who graduated from Whitesburg Hi in 3½ years, married Follace Fields on the 17th of this month. Mrs. Fields left last Sunday for Pikeville College where she will continue her education.

School was discontinued last week because of the danger of slippery roads. About four-fifths of the students ride to school in buses.

School to sponsor series of lectures During “Youth Week”

The week following Easter there is to be conducted in the Whitesburg High School and at night in the churches “ Youth Week Campaign”.

The purpose of these addresses is “Character Education”. “Youth is the Time to determine whether old age shall be a happy consummation or a bitter regret”.

The first great achievement young men and women should place behind them is to make their Home, that has given them birth and that has sustained them through childhood and youth, the happiest place possible. “Youth make or break their Home after they are 13 years old”.

The method used is “Inspirational Education”. These addresses are not a line of cold, formal, “highhat” messages; rather they are practical, heartwarming and timely lectures that will delight all who hear. Irresistable humor and human interest stories give the addressees a popular swing that holds the closest attention.

The subject was “Greater Dairy Profits through Selection and Breeding”. All contestants did a fine job in presenting their speeches. The winner will represent our chapter in the Field Day contest being held in Paintsville on April 6.

The remainder of the program consisted of the Bible reading by Jack Cornett and music by the Chapter band.

The following poem was written by Velma Sturgill (Armstrong), a member of the 1940 senior class.

Through tears and pains we have to give/The flowers that we most love./ God takes them to another field/Where they will bloom above.

Although it’s hard to give them up/We cannot make them stay./For God, the one that put them here,/Will too take them away.

Some of His flowers are weakling ones/Their life does not seem fair./But He will come and gather them/ And gather them with care.

And some are yet too young to bloom,/But God will take them too./He picks them out from all the rest./ In all that we can do./

So after all God is our King,/He rules all that’s on earth./And now He gathers one by one,/The flowers that He gave birth.