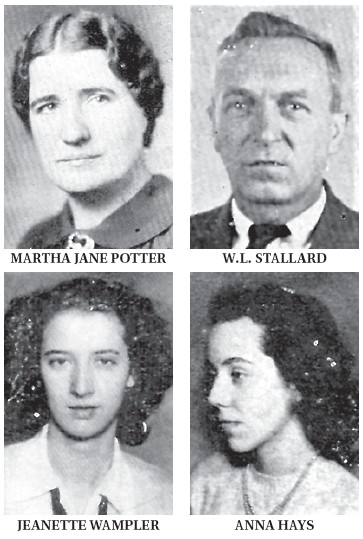 Last Friday at noon the Whitesburg Rotary Club accepted an invitation from Miss Martha Jane Potter (Superintendent of Schools) to dine at the lunchroom at the Whitesburg High School. Some 24 members and guests were present for the dinner and enjoyed fried chicken, beans, potatoes, gravy, slaw, pickled beets, apple sauce, hot rolls, homemade pie and milk and coffee.

Some of the Rotarians (including Dr. Dow) expressed a desire to eat there every Friday.

After the luncheon was eaten, Miss Potter explained briefly the purpose of the lunchroom, how the food was canned in the Cannery building and prepared by ladies of the community who have had the necessary training in the art of preparing meals. The Federal government, she further explained, aided with a certain amount in helping with the expenses and 15 cents per meal was charged each pupil who could afford to pay — some who were unable to pay were fed free. Miss Potter stated that at least four lunchrooms would be in operation in the county next year — one at Whitesburg, Fleming, Mayking, and Kingdom Come. Each lunchroom, it was explained, had been nearly self-supporting — the one at Whitesburg having a nice sum in the treasury which will be used to purchase supplies. All the funds received must help pay the expenses of the lunchroom.

After the discussion of the lunchroom was completed Rotarian Coy Holstein was called upon to relate some of his experiences at the Rotary Convention in Lexington. Coy gave quite a few remarks but said further remarks would be discussed in private with the members.

On Tuesday at eleven o’clock the high school students were given the rest of the day off to enjoy a picnic. The school buses were allowed, one to the freshman class, which went to Pert Creek, and one for the sophomores, who spent the day on Pine Mountain. The juniors, in private cars, accompanied by Miss Anne Dugan, Mrs. Jack Passmore and Mrs. Elbert Jenkins, went to the beautiful High Knob near Norton, Va., and spent the afternoon. A group of seniors went to Wheelwright, and enjoyed the recreational facilities there. And many of the seniors who did not go to Wheelwright enjoyed the day in the city or at their homes.

Sunday evening at the Baptist Church the Baccalaureate Address was given by Rev. J.S. Robinson of the Presbyterian Church. A beautiful number, “Cast Thy Burden Upon the Lord”, was sung by the High School Girls’ Glee Club. The seniors, wearing caps and gowns, were seated in the center pews of the church.

Wednesday evening at 7:30 the eighth grade graduation exercises were held in the school auditorium.

Thursday evening, May 2, the 30th annual graduation exercises of Whitesburg High School will be held in the school auditorium, with Dr. Charles A. Keith of Richmond, delivering the address to the graduating class. The Salutation will be given by Ann Hays and the Valedicatory by Jeanette Wampler. The high school Glee Club will sing “The River Sings a Song” and ”Songs of Victory.” Presentation of Diplomas will be by Miss Martha Jane Potter and Prof. C. J. Reed will present the graduation class to Miss Potter. There are 48 graduates of the class of 1946.

In “Poetry Broadcast”, a volume of poetry compiled for radio programs and to stimulate interest in contemporary poetry, William Leonard Stallard was chosen as one of the authors. This recognition as a poet should bring many heartwarming thoughts not to him only but to his relatives and friends.

He is a graduate of Georgetown and teaches Journalism and Spanish at Whitesburg High School. He writes poetry and short stories telling of the good qualities of the mountain people. At present, he is working on a novel, “As God Fixed It,” an account of religious schisms and doctrines, and the life habits and customs of the mountain people from the close of the Civil War to the present.

His poems, “The Man With the Razorback Sow”, “Where the Hills Begin”, “In Flanders Fields”, “What America Means to Me”, and “King Coal Goes to War” have been widely published and well received.

“ These achievements are highlights in his literary career and entitles him to a seat among the poets of fame.” -The Exposition Press, New York.

Remenber your motto, cling to the right

And success will honor you.

Never again will you walk the mile

There are other milestones well worthwhile

In the schools of Wisdom and Light.

Whenever you chance to cast your lot,

Keep your life as pure and free from a spot

As the diploma you received tonight

Be soldiers brave in war or at ease,

In all things let the Savior lead;

Until you enter His perfect Peace,