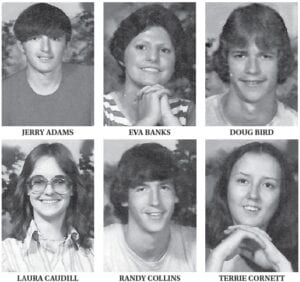 Hazard scored early in the game to take a quick 8-0 lead. But from there it was all Whitesburg.

Early in the second period, Greg Sexton plowed his way into the endzone from two yards out to close the gap to 8-6 at halftime.

Late in the third period, Erbie Pratt broke loose and made an excellent 61-yard run for a touchdown and a 12-8 Jacket lead. Jeff Gose then went in for the twopoint conversion to make the score 14-8.

The Jackets again scored in the fourth period when Mike Cook made a fine catch on a pass from Jeff Gose. Daniel Ingram then booted the extra point to give the Jackets the district crown for the second year in a row.

Erbie Pratt had a super night gaining 146 yards in 16 carries.

The defense was led by Mark Cornett with 8 tackles. Bill Adams and Greg Sexton had 6. William Raleigh and Greg Horn had 5 each. 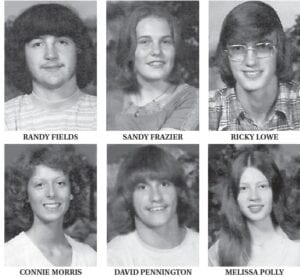 Mrs. Thomas is new at W.H.S. this year. This will be her 18th year of teaching here. She didn’t teach last year because she moved to Spring City for the year.

She is the wife of Dewayne Thomas and has a daughter who is a senior here at Whitesburg.

Mrs. Thomas said that being away for a year has made her appreciate W.H.S. even more, but she wishes that students would take full advantage of the opportunities available to them here.

Ann Webber is now teaching English in room number 20, which was Mr. Ison’s room. Mrs. Webber is the daughter of Maurice and Mary Emma Lewis. She is the wife of Phillip Webber and a resident of Letcher, Ky. She is also a 1958 graduate of W.H.S.

Ann Webber formerly taught at Whitesburg between 1962-1974 then took a leave of absence for two years.

Mr. Larry Tolliver is a graduate of Whitesburg High School and Morehead State University where he majored in physical education, health, and recreation. Before coming to W.H.S. he taught at Eolia Elementary School. He now teaches health. Since he enjoys all kinds of sports, he also is head basketball coach for the W.H.S. girls’ basketball team, he assists with the backfield on the varsity football team, and assists the baseball team.

This total is a new school record, exceeding last year’s record by over $2,000.