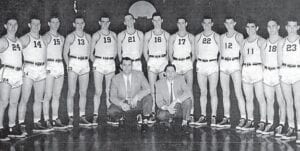 James Crase-A basketball player, a gentleman and a scholar. Lettered his Junior and Senior years. His mastery of the backboards, deceptive passing defensive technique, scoring ability and determination to win have gained distinction for him as being one of the outstanding Yellowjackets of the past 10 years.

Bobby Felix Kincer-An outstanding all-around athlete. Lettered three years in football, three years in basketball and one year in track. Alternate captain in basketball and highest scorer on team his senior year. Most consistent, always dependable and a great competitor. A good boy who has made himself known and respected as a good athlete throughout Eastern Kentucky when and where he played.

Merida Logan-Lettered three years in basketball and was captain his senior year. He played center offensively and defensively and did a good job coping with the biggest boys on the opposing team. His rebounding was excellent and his all-around play has been outstanding. His unselfish attitude and fighting spirit will be greatly missed by his remaining teammates.

Ralph Ogelvie-A good all-around athlete. Lettered three years in football, three years in basketball and one year in track. He was a good competitor and when most needed was at his best. He improved with every game and performed remarkably during tournament play. His good character and fine attitude will long be remembered.

Echoes from the hardwood

Basketball is fun, but the fun is the result of many long hours of hard practice. Basketball will always be my favorite sport. Arlie Joe Kincer.

This is a sport every boy likes. It takes hard work and training during the season. It teaches us to be good sports and to work with others as a team. Having played since I was a freshman, I’ve enjoyed every day, except the days we had the figure 8. Bobby Felix Kincer.

I think basketball is one of the best sports played. I also think that you can only expect to get out of it what you put into it. It is a lot of fun but I think best of all is we have a grand coach. And last, but not least, you meet a lot of pretty girls, boy, does that thrill me? Merida Logan.

I think basketball is a lot of fun even if it is hard work. It teaches you to depend on your teammates as you depend on yourself. I think anyone who isn’t going out for the game misses a lot. Bert Bach.

Basketball is a good game, the practice is hard during the season and you get tired of playing, but after it’s over the more you watch it played, the more you want to play. I wish I could play another year in high school. Ralph Ogelvie

Band concert to be given at the Alene Theatre

The band concert promises to be one of the most entertaining features ever given here by our school band. The band has rented the Alene Theatre for the night of April 1, and will receive all proceeds from the program. Whitesburg High School band is composed of 60 members. Among the numbers will be “Persian Market”, “Serenata”, “Amparito Roca,” “Joshua”. The most exciting part of the program for that night will be the debut of the Whitesburg High School Orchestra.

Students, do we appreciate the educational advantages offered in our assembly programs? Take for instance that film showing the greatest symphony orchestra director of the world, Arturo Toscanini as he gave us music to thrill our souls! Mr. Adams, our music director, gave us some personal remarks about him since he had the privilege of being in Toscanini’s audience.

Mr. Clel Rodgers gave a highly entertaining talk on “Beauty for Ashes”, telling us how to turn our mistakes and small abilities into great things in life if we set our mark high and live a life approved of God.

Mrs. Breeding presented two of her civic classes in two plays. Mrs. Breeding has a wonderful power of training students to feel at ease and perform on the stage. Outstanding performers were Stephen Day and Peggy Adams. All the other students in both plays did exceptional work too.

Last week Whitesburg High School students enjoyed Intra-Mural basketball. Tournament drawings included the freshman, sophomore, junior and senior teams. No boys who played varsity or B-Team basketball were allowed to participate. Seniors came out as winners and the final game was played on Friday afternoon at 1:15 against a faculty team. Referees for the tournament have been Coach Ed Moore and Coach James Boyd. Admission for the games is 10 cents and proceeds will go to the band for the new uniforms.

The Manual Training Class, taught by Mr. John Preston, has been very busy. They have varnished the opera chairs in the auditorium. They have also recently built and installed some very nice bookshelves in the pastor’s study of the Methodist Church.

The Grade School Testing program will begin on April 19 for the Intermediate and upper grades. The test for the lower grades from 1st to 3rd will be given on May 7.

The Whitesburg High School senior class will leave on Monday, April 12, at 5 a.m. They expected to reach Washington, D.C., about 10 p.m. They will be registered at the Cairo Hotel and will arrive back in Whitesburg about 11 p.m., Thursday, April 15. Chaperones will be Prof. Kendall Boggs, Mr. James Boyd, Mrs. Blaine Polly and Miss Vera Raleigh. There will be 100 in the party including chaperones, seniors and bus drivers. They will go by Cumberland Coach buses.

The senior class of 1954 presented “Climbing Roses,” a three-act comedy by Eugene G. Hafee, at the school auditorium on Tuesday evening, April 20. A large and appreciative audience enjoyed this excellent display of talent. The cast of characters included:

Hazel Sommers-Who has a fondness for orange blossoms, Benita Collins.