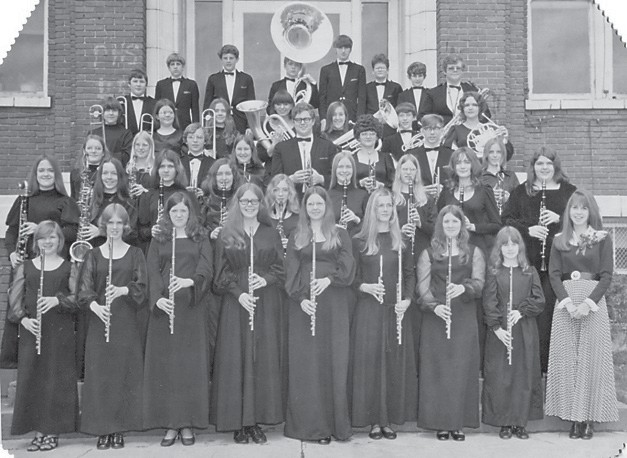 The 1971 marching band under the direction of Field Commanders, Maggi Fields and Charlene Williams attended Crescendo Band Camp during the summer of 1971 to prepare for band competitions. Crescendo Band Camp was quite an experience! The days started at 6 a.m. and ended around 10 p.m. We spent about eight hours on the field and five hours sectioned off practicing music. Although band members complained of the food and the heat, we survived! We came home and spent the summer practicing on the practice field located on the empty lot beside of the Whitesburg VFW building. We were ready for the football halftime shows and providing pep band to cheer on the soon to be Eastern Kentucky Mountain Conference Football champs and the District Basketball Champs for the 1971-1972 year. The majorettes for the 1971-72 year were Sheryl Garrett, Robin Holbrook, Lee Anna Mullins, Charlene Williams and Terri Greene. We participated in the Apple Day Festival on Oct. 2, 1971. The band won 3rd place, participating in Class B division along with 7 other bands. Our Field Commanders won 1st place. After competition the band marched in the Apple Festival Parade. 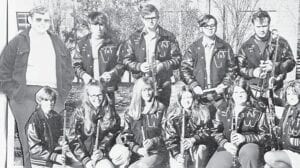 Whitesburg High School band participated in the annual Veterans Day parade at Cumberland. The parade was held on a rainy Saturday morning, Oct. 23, 1971 with the band proceeding on to the Cumberland ballpark where we performed in front of judges from the music department at Cumberland College. The band of 46 members and our two field directors competed against bands of 50-55 members.

The Whitesburg High School marching band was invited to participate in Governor Wendell Ford’s inauguration parade, Dec. 7, 1971. The band was excited to be going and to stay overnight at the Campbell House. The band traveled from Lexington to Frankfort the morning of the parade. The length of the parade was 5 3/4 miles and the band was thrilled to be a part of the inauguration parade despite the wet, cold day!

In January 1972, the band began practicing for concert band competitions.

Several of the band members attended the March 1972 Morehead State University Band Clinic They were among the 400 high school musicians who participated in the annual four-day event, to help prepare for the upcoming concert band competitions.

April 22, 1972, Whitesburg band participated in a state band contest in Pikeville. Whitesburg was the only band to receive a superior rating. The other bands in its class were Hazard, Elkhorn City, Fleming-Neon, Jenkins, Virgie, Johnson Central and Johns Creek.

The band traveled to Cumberland College in Williamsburg, on May 3, 1972, and returned home with three #1’s, another superior rating! The band’s bus was met at Pine Mountain Junction by the Whitesburg City Police and Mayor Ferdinand Moore. Mayor Moore presented band director Mina Breeding with a letter from the city for a job well done. The police and Mayor Moore escorted the school bus with the band to Whitesburg High School. 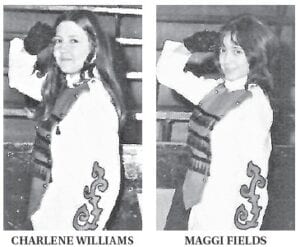 The seniors’ farewell band concert was held May 21, 1972. There were 40 band members. Selections played during the concert were: Montage, Overture in B Flat (contest number), Sonnet and Dance, Dramatic Prelude, Pageantry Overture and Rhapsodic Episode (contest number).

During this last concert, Director Mina Breeding announced that this would be her last time to direct the Whitesburg High School band. On the last day of school, Miss Breeding presented each senior band member with an award and Randy Breeding received the John Philip Sousa Award. The John Philip Sousa award honors the top student in the high school band recognizing superior musicianship and outstanding dedication.