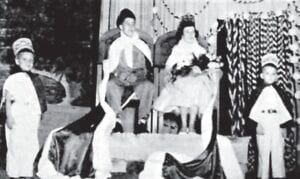 The Halloween Carnival has come and gone again with the school’s patrons making it the usual success. The halls and classrooms were filled to overflowing crowds, while highly amateurish carnival barkers squawked their wares, and nickels and dimes trickled in to take care of the needs of the school. Parents joined in with the children to put on variety shows, style shows, and similar entertaining diversions. The crowds that rushed their tents (classrooms) were sufficient proof that they were highly entertaining. Of course, the outstanding event was the crowning of the King and Queen and their dubbing the Prince and Princess.

Selected for these enviable positions this year were Eugene Sparks, King; Eva Lou Everidge, Queen; Owen Wayne Wright, Prince and Mary Lee Gentry, Princess. The crowning indeed was a colorful unforgettable scene. It centered around the theme Deep Purple, the coloring being carried out very effectively in all decorations. Mrs. Jackie Owens and her assistants are certainly to be commended for their exemplary work. 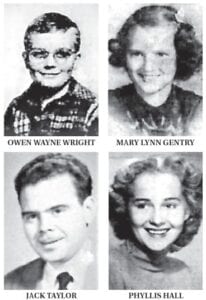 Miss Patsy Ann Fields was quick to demonstrate her ability in organizing and carrying out such a project. Everything was planned in black and white and worked efficiently. The morning after school officials were thrilled when Miss Patsy Fields reported a total of $2961.09 had been realized from the carnival. This amount was immediately turned over to the P.T.A. which will decide the most pressing needs of the school and just how the money should be spent.

The Whitesburg Band Boosters Club met Friday afternoon in the Band Room at 2:00 p.m. The meeting opened with prayer by the Rev. E.H. Barnett. A brief welcome address to the new band instructor and new members was given by Mrs. Zenneth Bentley. During the business session which was conducted by the president, Mrs. W.P. Nolan, the following committees were appointed: Nominating committee, Mrs. Bradley Bentley, Mrs. Forrest Gentry, and Mrs. Coy Holstein. Membership committee, Mrs. R.P. Price, Mrs. Windus Williams and Mrs. Oscar Lewis, and others. The treasurer’s report was given by the treasurer Mrs. Arthur Banks. Mr. Jack Taylor, the new band director, gave a short talk pledging his best efforts for a successful year for the band. Mr. Kendall Boggs, new principal, spoke highly of Mr. Taylor and urged that all parents support him in every way. Hugh Adams, former band director, also pledged his assistance in every phase of the work of the band.

Creating more interest and enthusiasm at the athletic events and other school activities as their goal, Misses Betty Little and Dorothy Jenkins have organized the Whitesburg Pep Club. Membership is by invitation and is based on a student’s display of unusual school spirit. The sponsors feel this will provide a select group. To date about forty invitations have been issued and accepted. There will be no limit to the membership but the club plans to grow gradually. There will be a reserved section of the stadium and gymnasium for members. Attendance will be checked. Special yells will be worked out with the band and cheerleaders. Plans are not definite yet but the school colors of orange and black will be used in some way at the games. There will be a social at the end of the season. At the first meeting the following officers were elected: President Joyce Kincer; Vice-President-Jimmy Spence; Secretary-Shirley Frazier; Treasurer-Sheila Moore. Since its organization the Pep Club has participated in different activities, the most outstanding being the rally previous to the Pikeville game. The procession of the snake dance led by the band through the streets of our town and ending on college hill where a bonfire was lit, gives an idea as to just how lively they will make things.

Phyllis Hall was chosen to represent Whitesburg High at the Big Sandy Bowl football game in Paintsville November 13. Each homeroom teacher chose a representative and the following seventeen beautiful girls appeared before the faculty in the beauty contest: Freshmen Monzella Brown, Janice Raleigh, Bobbie Sumpter, Geneva Hogg, Barbara Holstein, Lillian Fraley and Carol King. Sophomores: Phyllis Hall, Ramona Sparks, Joella Craft. Juniors: Lois Mullins, Shelbia Mullins and Ann Cox: Seniors-Yvonne Hall, Betty Webb, Shelia Moore and Lacquita Brown. From this array of pulchritude the secret ballot revealed the three receiving the highest number of votes were Phyllis Hall, Ramona Sparks, and Yvonne Hall. Votes were again cast and Phyllis Hall received the highest vote. The queen will be crowned at the halftime. Contestants from all schools of the Big Sandy Conference will compete. The Bowl Queen will be chosen on the basis of beauty, personality, charm and appearance. Whitesburg High representative Shirley Butcher won the honor last year and she will reign until the new queen is crowned this year.