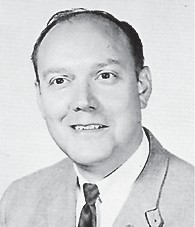 Mrs. Frances Dobbs: Graduated from Eastern Kentucky University in June, 1965 with a B.S. degree in mathematics. She taught last semester at Melbourne, Florida. She is married and has no children. Her husband is in the Air Force and leaves for Thailand in October. She plans to be a teacher and housewife. Her favorite food is pecan pie. Her favorite song is “Yesterday” and her sport is basketball. She likes nearly all sports and enjoys collecting and trying new recipes.

Mr. Don Bowling: He graduated from Pikeville College with a B.S. degree. This is his first year to teach and he likes Whitesburg High. He is married and has no children yet. Mr. Bowling plans to go to the University of Florida Law School in the near future. His favorite food is fried chicken. He likes all sports and enjoys watching sports on T.V. His hobbies are hunting and fishing. Miss Cleo Stamper: We, the Black Kat Staff , take this opportunity to welcome back to the faculty, Miss Cleo Stamper, who has taught in our system before. She is teaching English and speech. She attended Union College, Peabody and the University of Kentucky. She holds a Bachelor of Science, Master’s and Library Science degrees. Her favorite hobby is reading, her favorite sport is tennis and she enjoys watching basketball games.

Mrs. Morrow: We are happy to welcome Mrs. Sue Morrow as a member of our commerce department. Married to the Rev. David Morrow, pastor of the First Baptist Church, they have two children, Kristi, age 7, and Joseph age 4. Mrs. Morrow holds a B.S. degree from Pfeiffer College in North Carolina. She enjoys teaching and says, “There is no other occupation she would rather be in.” She says she enjoys teaching here because the classes are small enough to give individual attention. She does not have much time for hobbies, but she says she “loves living in general.” Her favorite food is steak and anything chocolate. Her favorite book is Jane Eyre and her favorite song is “Moments to Remember.”

Mr. Jimmy Arthur: Mr. Arthur is a graduate of Eastern State University with a Bachelor’s degree in mathematics. He has taught at Fleming High and Breathitt County High. When asked how he likes teaching at WHS, his reply was “Love it!” Mrs. Arthur is also a teacher at WHS. They have two daughters, Kimberly, two, and Janet, five. Mr. Arthur plans to make teaching his life’s profession. His favorite food is sausage pizza, his favorite sport is basketball, and his hobby, “Fishing, fishing, fishing.”

Coach Walter Thomas: Coach Thomas graduated from Indiana University with a B.S. degree. He likes teaching at WHS. Mr. Thomas has a son, Byron, and a daughter, Karen. His wife was the former Madonna Fitzpatrick. Coach Thomas plans to be a teacher and coach for life. His favorite food is steak; his favorite author is Shakespeare, his song, “Strangers on our Shore,” his sport, football — naturally. His hobbies are hunting and fishing. Favorite program on TV, “Bonanza”.

Mr. Buddy Roe: Mr. Roe was graduated from Pikeville College with a B.S. degree. This is his seventh year to teach in Letcher County. He likes WHS. Married to the former Donna Adams, they have one child, a little boy named Bobby, who is four. Mr. Roe plans to be a teacher for life. His favorite food is pork chops; favorite TV program is “Gunsmoke”; favorite song, “The Twelfth of Never.” He likes sports. His hobbies are squirrel and rabbit hunting.

Carl Bennett Banks: He attended Eastern Kentucky University for two years and graduated from Pikeville College with a B.S. and a major in history and political science. This is his first year to teach and he plans to make it his career. When ask how he likes WHS he said, “Just fine, but we should try to get back in the Southern Association.” He is married but no children. His hobbies are reading, history and target shooting. He likes all sports and music. His favorite TV show is the C.B.S. news.

Mr. Alan Siegel: WHS is very excited about its new band director and teacher of chorus. Mr. Siegel is 21 years old and single (but engaged). He is originally from New York and is a graduate of Morehead State.

(The above article from the September 1966 Black Kat.)

We realize the tremendous responsibilities and problems facing you each day. Whether these problems are in public relations, the curriculum, or the ordinary, everyday problems at WHS, you have always applied the philosophy of the dignity and the worth of each individual.

With your clairvoyance and knowledge, you have had feasible solutions for all problems. You have upheld principles of character, leadership, and integrity, and have displayed a professional attitude.

You have shown your loyalty and dedication to W.H.S. by supporting every phase of the school program.

On behalf of the Yellowjacket Staff , we humbly dedicate the 1967 Yellowjacket to you, Mr. Burkich. May it be a constant reminder of the respect you have earned from the faculty and the student body.

Please bring Mr. Bowling something to keep his ears warm, so he won’t have to turn his coat collar up so high, Margaret Hammonds. I want a portable teacher to play with all the time, one that I can shut up when I want to, Gary Banks. Bring Betty Adams a wig to cover up where Johnny pulled her hair out, Joe Reynolds. Bring me a new needle for my record player, Jody Cornett. A key to Fort Knox and some nerve pills for Mrs. McCleese, Marsha Wilcox. Bring my brother and my sister and her four children to Whitesburg, Betty Adams. I would like for you to bring a bell for the psychology room over in the cannery building, Peggy Morton. Please bring Bud and me “his and hers” Mustangs, Linda Holbrook.

(The above article from the December 1966 Black Kat.)