The Whitesburg High Senior Class toured Washington, D.C. during spring break. The eager seniors left on May 5 and returned home May 10. We asked the following seniors what they liked best about the trip. Here is what they told us: Gene Yinger- “I enjoyed the Seven-Eleven store very much.” Myra Corrello and Leslie Fields- “I loved the play at the Kennedy Center.” Chris Combs- “I enjoyed Margie Hogg and I almost getting shot at Kennedy’s grave and a pedestrian kicking a stop sign on Main Street.” Vickie Johnson- “We had seventeen girls in one hotel room trying to get dressed up to go have pictures taken.” Bascil Boggs- “I liked the Seven-Eleven store or Arlington.” Mary Smith- “I liked the hotel roll-out windows with the great view.” Doug Raleigh- “I loved the bus ride home and staying at the hotel.” Lesa Neace- “I enjoyed the boat ride and getting to meet different people.” Ronald Baker- “I liked the Lincoln Memorial and the Washington Monument.” Melinda Combs- “The attitude of the sponsors helped make the trip more enjoyable than it was.” Edwina Howard- “I enjoyed the Kennedy Center.” 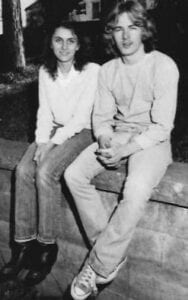 The annual W.H.S. Ring Dance for 1980 was held Monday, November 24, at the Whitesburg High School Cafeteria. This year’s ring dance featured Tony Ison and his Big Red Machine. The moment the seniors had been waiting for finally arrived when the class rings were presented.

This year’s Ring Dance King and Queen were elected Monday morning, November 24. One boy and one girl from each homeroom were nominated as candidates for the title. The 1980 candidates for Queen were Laura Adams, Tammy Creech, Teresa Davis, Ruth Gibson, Teresa Nichols, and Sherry Waller. The King candidates were David Blair, Tim Lucas, Greg Hogg, Billy Smallwood, Robbin Roberts, and Roger Collins. David Blair and Laura Adams were chosen as the new Ring Dance King and Queen.

Friday, May 15, the Math Club held its initiation. Seven brave math lovers went through the procedures. They were: Susan Adams, Lisa Bentley, Paul Demichow, Robert Gatton, Ray Gish, Dipi Khurana, and Suzy Reynolds. Each person meeting grade requirements, and wanting to enter the Math Club had to do the following things: dress as a “studious-looking” person or a geometric figure, print the law of cosines on their forehead with a black magic marker, wear a sign stating “Math Club Initiate”, carry a ruler and a tetrahedron, and bring their lunch in a lard bucket. The initiates were given measuring assignments ranging from determining the number of hops from the cafeteria to the English building, to calculating the area of the girl’s bathroom door. At lunch all the initiates sat in a circle on the cafeteria floor and ate between their intervals of singing songs. These seven students went through a hard day, but not they can honestly say that they are official Math Club members.

Being of sound mind and body…I, Lois Dixon, will my spot in the school store to Regina Morris. I, Teresa Dunn, will my ability to be on time for third period to Randy Frazier. I, Derenia Boggs, will my ability to be “Dear Abby” to Elisha Morris. I, Vickie Johnson, will my great times during pre-calculus homework to Kitty Gish. I, Tim Absher, will my laughter and jokes to Randy Wilson. I, Tim Bentley, will all my ridiculous nicknames to Greg Cornett. I, Tim Lucas, will my spot in the top of the English Building to Jennifer Noble and “whatever” else she is with. I, Joyce Collins, will my water fights on the senior trip to Donna Mullins and Alice Baker. I, David Boggs, will my racing flats to Kenneth Burton for long jumping. I, Michael Baker, will my nickname “Mighty Moe” to Daniel Ray Adams. I, Greg Boggs, will my boring school days to Diane Collier. I, Vernus Sturgill, will my Nike racing flats to Greg Lucas. I, Shawn Wagner, will my ability to leave the school hill with Tim to Kim Pennington. I, Bill Amburgey, will my tuba expertise to Anthony Ison. I, Sherry Waller, will my hopelessly lost calculator to Mark Cornett. I, Michael Blair, will my “knowledge and wisdom” abilities to Paul David Sturgill. I, Ronald Baker, will my good times to Jerry Caudill. I, Keith Callihan, will my back seat on the baseball bus and my ability to sing to Greg Hall. I, Shelia Boggs, will my ability to play the trumpet to Rick Sparks. I, Cecilia Webb, will my squeaking power on my clarinet to Machelle Bates. I, Doug Adams, will my tardy excuses to Shelia Pence. I, Mary Smith, will my ability to go my whole senior year without making it to homeroom on time to Ramona Reynolds in hopes that she will use this ability with as much faithfulness as I did. I, Debbie Adams, will my ability to always be at class on time with a smile on my face for my teacher to Sue Sturgill. I, Chris Combs, will my ability to choose a partner for graduation to Mark D. Cornett. I, Joe Banks, will my guitar and amp to Jaranda Spangler. I, Melinda Combs, will all my musical talent to Karen Maggard.

Bert Bradshaw was the winning pitcher for the Jackets.

In the second-round action of the tournament, the Jackets were pitted against the Knott County Patriots. The Patriots defeated the Jackets by a score of 4-3.

Bobby Pike had two hits and one run, while Randy Frazier had one hit and one run. Gary Boggs had one run. Jimmy Benson was the losing pitcher. Bert Bradshaw and Bobby Pike made the All-District team.

On Friday, May 15, W.H.S. students watched first round action of the class tournament. During the first game the freshman class played the sophomore class with the sophomores being the winners. The freshmen class was coached by Jamie Creech and Tim Smith. The sophomores were coached by Mark Bates and Donald McCall.

The juniors then played the faculty on Tuesday, May 19. Players for the faculty were Assistant Coach Hatton, Jon Henrikson, Coach John High, Track Coach Eddie Holbrook, Coach Doug Chandler, Coach Ozz Jackson. The coach for the faculty was Buddy Roe. The faculty won in a close game by a score of 24-20.

(The above articles from the 1981 Yearbook and Black Kat Newspapers)