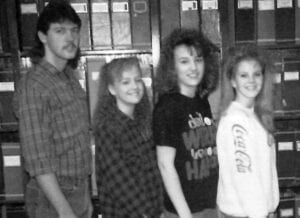 On Wednesday, September 20, Mrs. Webber’s French Club held its annual election. Kim Gilbert was chosen as club president and Skipper Nantz was chosen vice-president. The club meets on the third Wednesday of each month. All students interested in joining the French Club must have a “B” average in French II, and attend the next meeting which will be held on October 18. The meeting will be conducted by Kim Gilbert and Skipper Nantz. Senior will — Part II

I, Deanna Nichols, will April Hogg my driving ability. I, Shawn Campbell, will Tamara Ann Wright my heart and all my love. I, Thomas Collins, will Gabe Galer my knowledge of cars because he needs it bad. I, Angie Hatton, will Doug Chandler my ability to park a car. I, Larry Ratliff, will everything to Mike Benson because he needs all he can get. I, Travis McDaniels, will Mikey Pack my ability to saw town trees with the front of my car. I, Tim Bates, will nothing because everything I have leaves with me. I, Janice Watts, will my ability to keep my toenails on to Brian Sumpter. I, Jennifer Short, will Tacy Webb my ability to not flirt with Marcus Bowling. I, Lisa Ann Fields, will Carla Stamper my ability to have something witty to say about everything and the memory of our childhood. I, Elijah Fleming, will Bruce Sexton my ability to play Rook. I, Tracy Wilson, will Kim Wright my great personality. We, Jennifer Hart and Lesa Fields, will Johnny Hopkins our misfit t-shirts. Media award 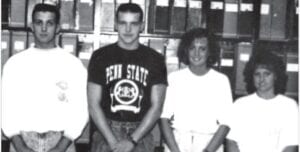 In its first year the W.H.S. Media Class received 1st and 2nd place awards in the Third Annual Kentucky Video and Script Contest sponsored by Eastern Kentucky University. A first place was awarded to W.H.S. in the Music Video category. Whitesburg placed second in the Comedy and Drama category, which was produced in conjunction with the Drama Class. There were more than 100 entries in the statewide contest.

This weekend was a landmark time in Letcher County. It not only marked the beginning of fall on the Autumn Equinox, the 22nd, but it also brought us to the end of the Mountain Heritage Festival. As the festival ended, we also saw the completion of the remaining tournaments. Included in these was the annual Mountain Heritage Chess Tournament. Three students from W.H.S. competed in this tournament, Joel Webber, Robert Soto, and Rory Caudill. Joel won the first-place trophy in the high school section, while Rory Caudill won second in the open section. Robert Soto also placed in the open section.

The athletic department at Whitesburg High School is presently involved in a renovation project at the Whitesburg High School football field. They are expanding their press box, building an extension onto the weight room, and adding a visitor’s dressing room. They have set their goal for this project at $60,000 and they need your support as a Whitesburg High School alumni or a friend or a booster of the WHS Football program. If you can help them, please make your check payable to Whitesburg High School Football and send it to them by June 15, 1990, if at all possible. Football Coach Tom Searcy; Arthur “Ozz” Jackson, Athletic Director; David Williams, Principal of WHS said, “Any contribution you can make would be greatly appreciated.” Contributions of $1000 or more will receive four lifetime passes to WHS football games and a WHS football print (painted by Ann Daniel Hall, a WHS alumni).