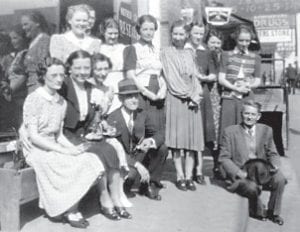 Henry Howell Harris was born in Turkey Cove, Lee County, Va., on December 16, 1859, and educated at Mountain View High School and College, taught at Green Hill, Owsley County seven years, at Beattyville, 18 years, at Jackson seven years, and in 1919 he came to Letcher County and taught at Hot Spot, Haymond, Eolia and Whitesburg.

As soon as he began to teach, he had as pupils boys and girls eager to learn, and young men and women from other counties, hungry for knowledge, and many preparing for teaching and other professions.

He was born a teacher, but he had “to be born again,” in order to meet the requirements and qualifications necessary to give that splendid body of young people “all they could do” in their books.

He led them through pure mathematics, Ray’s practical and higher arithmetics, Butler’s and Harvey’s grammars, several U.S. histories, physiologies and other common branches. Teachers and pupils had to study day and night to master, completely the difficult work, then taught, which enabled them to meet the old-time examinations or enter upon the studies of any of the professions.

There were no high schools near. They needed none because it took all their time to master the subjects they were studying. They were educated by hard study, quiet and constant application, hours of thought on difficult problems. Those were the Normal Schools.

The same kind of teaching followed at Beattyville. When he began there, only six resident teachers were in the county. The examiners were brought from other counties — James Steele from Owsley, and Prof. Dickey from Breathitt County. The first day of school, he said, “Get busy and prepare to teach the schools of this county. You must study hard for two years.” They did, about 25. The examination was diffi cult, but they passed, and all got schools. They made good teachers

In 1912, Mr. Harris took charge of the fine new building in Jackson. Soon a high school was organized. In fact, they were being organized all over the state. Through these a more extensive education was offered to students. From this time on elementary education was not stressed so much. Importance was laid upon high schools, and in many instances (not all) pupils failed and still fail to get a well-balanced education.

Mr. Harris does not wish to be viewed as a mossback or a non-progressive for he entered whole-souled into the high school work, when it became his duty. He “went back” to his algebra and geometry, hunted up his old Caesar and took the mathematics and Latin and high school arithmetic classes.

He came to Whitesburg in 1919. It was then a little town with dim electric lights, muddy streets, and few sidewalks. There were about 10 high school pupils. The school grew with the town as the town grew into a city. Every year high school pupils graduated. Some went to college, but had to take entrance examinations. All passed, and none had to return. The diplomas were not recognized. But in 1923 the high school at Whitesburg was put on the accredited list, and since then the diplomas of the school have been honored by the colleges of the state. Some go to State, some to Centre, some to Wesleyan, some to Georgetown, others to Berea.

Mr. Harris had the pleasure of teaching in Whitesburg for eight years. The graduates from the high school grew from two to 16 a year, and at the end of the eighth year, there were enrolled 169. He is proud of the boys and girls whom he taught here.

In 1930, he was assigned to the new school on Cumberland, a three teacher, two-year high school. In the high school 12 enrolled. The people on Cumberland like him and he likes them. He will most likely teach there again, but he is in the hands of the County Board for placement.

Soon after he came to Kentucky, he was married to Miss Allie R. Sanders, graduate of the Bourbon Female College, Paris, Ky. She was teaching with her father at Booneville and Mr. Harris’s school was one mile north of Booneville. The schools were rivals for the patronage of the surrounding counties. The competition was sharp, Mr. Harris persuaded Prof. Sanders’s best teacher to join him in the work at Green Hill. They were married. This settled the controversy. Prof. Saunders lost his primary and music teacher, quit the field and devoted his whole time to preaching. Since then Mrs. Harris has taught with her husband in all of his schools, has instructed in music and is still connected with the music of the Whitesburg School.

To this union were born six children, two who have died, Mary Richmond Harris, at the age of 8, and Grace Harris Fulkerson in 1935. The other children are Howell H. Harris, Lamar Harris, Lt. Willard Harris and Mrs. Virginia Harris Combs.

All ove r the sta te Fri day, Oct. 27, the schools will observe Temperance Day. Our school will give a program consisting of songs, etc. and we shall expect the parents to be present. High school will favor you with a song “Touch Not, Taste Not, Handle Not.” We will also wear above our hearts a bow of white, which signifi es temperance and purity.

Our room is doing splendid work this month. Everyone comes to school with well-prepared lessons.

Next week is “Good English Week!” Freshmen will wear stripes of green ribbon. If you hear us make a mistake in our English tell us and we will thank you. We will present a play, “Good and Bad English.”

The freshmen boys are making tie racks, matchboxes, etc. in manual training under Mr. Blair. The girls, under Miss Howell, are doing neat work in the sewing class. Soon the girls will give a drill in which they wear the dresses made by them in school.

Come up and visit us, you’ve no idea what Whitesburg High School is doing. Lucy Ewen, Editor

The best game of the season by far came with the closing game with the Hazard state champs. In this game, the Whitesburg bunch led for three quarters of the game, and remained in the lead until Addington, Wright and Collins had fouled out; after that, in the entire last quarter, Hazard scored one field goal and two fouls, winning by 16 to 20 in one of the hardest fought games ever played on the Hazard floor. The score at the first quarter was 6-2; half, 14-7; third quarter, 13-14.