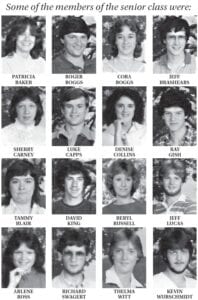 Senior Year Remembered Part III: Whitesburg High enjoyed another first this year when Ray Gish received a nomination for Presidential Scholar. Ray was named as a finalist but failed to be designated as a scholar. Seniors receiving academic scholarships this year included Karen Buntin, Pam Adams, Ray Gish, Pam Hall, Jatanna Adams and Patricia Baker. The Ring Dance was held in November. Ricky G. Adams and Peggy Wagner were named Ring Dance King and Queen. The Prom was held on April 29. This year’s theme was “Southern Nights”. Kaye Gose and Mark Cook were the royal couple. And who can forget the post-prom party at Mark’s house, when the floor fell through and several partying people crashed to the ground. It was very exciting, but there were no serious injuries. Senior Skip Day was a highlight of the year. We went to Carr Fork Lake, and so did the Knott County Sheriff ’s Department. A couple of people were arrested, only one of them a senior. Everyone seemed to have a good time, though. Hardly anyone was busted for skipping. The graduation this year was May 27. The Valedictorians were Pam Adams and Karen Buntin. Class president Dougie Holbrook made a presentation to this year’s speaker, the president of Lee’s Junior College. The graduation party was held at Ray Gish’s house. There was a larger crowd than expected, but the party when well anyway.

Principal’s Message: “Climb Every Mountain”, this year’s motto for the senior class, is also an appropriate theme for this historic year at Whitesburg High School. The administration, faculty, and parents will be remembered for their efforts to obtain a new high school. Despite adverse conditions, our students have excelled in all areas. Two students will be participating in the Governor’s Program at Centre College, one was nominated as a Presidential Scholar, and a team of students participated in the KET Scholastic Challenge, in Lexington. Once again, we have had a successful year in sports, with the highlight of the year being the Lady Yellowjackets named runners-up in the Girls’ State Tournament in Richmond. The band has brought honors to our school with an All-State Member. The cheerleaders won the 14th Regional Competition. The students in the vocational school and DECA brought home many awards in both Regional and State Competition. In the midst of all of the happenings, our entire student body was greatly saddened by the tragic death of two classmates. We mourn their passing and are reminded that life is precious; and therefore, we should strive to make each day meaningful.