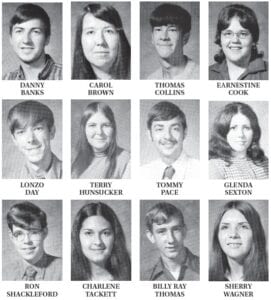 All were captured by the romantic transformation for the Junior-Senior Prom, held Saturday night, May 19. The evening was devoted to the theme of “Somewhere My Love”. The evening danced on in the music of Brewer’s Art as anticipation mounted toward the climax of the night . . . crowning of prom King and Queen. As the lights came on, giving full view of all, the welcome was delivered by Junior Bill Martin Collins and the response was given by Senior Homer Combs. Then, WHS Assistant Principal Mr. Horn, introduced Junior Delana Watts who sang the theme song “Somewhere My Love”. Finally, the moment had arrived. As Sheryl Garrett and Jenny Combs sought out the Senior “royalty” among the crowded tables, many were obviously nervous. Upon sighting the Queen and King, Phyllis Profit and Craig Campbell were escorted to the stage, where amidst the roses, they were crowned and then danced the traditional waltz.

The evening had reached its peak and left everyone filled with excitement and memories forever.

The seniors arrived in Washington, D.C. early Friday morning, April 6. After checking in the hotel and changing clothes, the tours began. They visited the capitol (and had their group picture taken), Lincoln, Jefferson, and Washington Monuments, Smithsonian Institution, and saw “A Midsummer Night’s Dream” at the Kennedy Center.

Saturday morning and “6:45” came too early, but at least a little rested, the seniors were given a guided tour of Washington. Highlights included Embassy Row, Washington Cathedral, Mount Vernon, Arlington Cemetery, and the Change of the Guard at the Tomb of the Unknown Soldier. A boat ride on the Potomac concluded Saturday’s schedule.

Because of bad weather, the seniors didn’t visit the Statue of Liberty Sunday afternoon as planned. Instead, they had few hours to themselves to rest, clean up, and see a bit of New York at their own pace. Sunday night included dinner at Mama Leone’s and entertainment at Radio City Music Hall featuring the famed Rockettes.

Monday, the seniors were given a guided and lectured tour of uptown and downtown New York City, visiting the United Nations Building and the Empire State Building, Chinatown, Greenwich Village, and St. John’s Cathedral. The tour of the NBC Building ended with the seniors in the audience of the game show “Sale of the Century” and screaming “Buy it! Come back!” at the top of their lungs. Monday night the group saw the Broadway musical “Seesaw”, bringing another Senior Trip to an end.

Our freshman year had finally come to a close and it had been a real experience for all of us. But we were ready to take the next step on the road toward our goal.

The next year started off great. We were silly sophomores and were proud to live up to our name.

We added two members to the band from our class year. Besides Jamie Breeding, Mitzi Mayes, and Tommy Ison, the two new members were Cordelia Collins and Robin Holbrook.

The 1972-’73 Student Council has asked for several changes in our school this past year and would like the student body to be aware of the results.

There will be eight cheerleaders in 1973-’74, chosen by outsiders instead of the five being picked by popular vote.

Mr. Burkich has assured us that lights will definitely be put up on our campus… finally. The fence, hopefully, will be next since the materials are already here.

The Council asked for better lunches and students reported that there was indeed an improvement.

A Student Lounge has, of course, been asked for and Mr. Burkich will consider the idea. Please help next year’s student council and maybe in a year or so . . .

Plans were made this year for a 60th Anniversary School Birthday next year. A date will be set at the beginning of the 1973-’74 school year.

Mitzi Mayes, valedictorian of the graduating class, has been given the Annual Award of the Reader’s Digest Association for students who by their successful schoolwork give promise of attaining leadership in the community. It was announced today by Mr. Jack Burkich, Principal.

Miss Mayes will receive an honorary one-year subscription to the Reader’s Digest in any one of 13 language editions which she chooses, and personal certificate from the editors “in recognition of past accomplishments and in anticipation of unusual achievement to come.”

The award to Miss Mayes, who is the daughter of Mr. and Mrs. Jeff Mayes of Letcher, Ky., was made possible through the cooperation of Mr. Burkich and his teaching staff. They selected Miss Mayes to receive the award, designed to stimulate scholarship, citizenship, and continued contact with good reading after graduation.