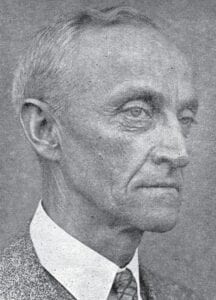 Richard Dean Squires was born at Little Rock, in Bourbon Co., on Dec. 5, 1878. He was the son of the late Jas. P. and Sallie Robinson Squires. His early education was obtained in a rural school. He received the A.B. degree from “The Central University of Kentucky,” now Centre College.

He received his Master’s degree from Columbia University, New York. Mr. Squire’s life has been donated to teaching. He began by teaching in a one-room school in Montgomery County, Kentucky. He then was Supt. of some of the biggest consolidated schools in Indiana for seven years and Supt. of the schools at Carlisle, Kentucky for nine years.

In April of 1922, Mr. T.J. Coates, President of the Eastern Kentucky State Teachers College and Normal School, called him to take Mr. Lewis’s place at that institution. Mr. Lewis was called to the State Department at Frankfort. 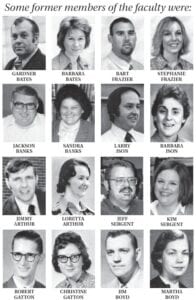 In July of 1927, he resigned his position there to become the Superintendent of the Graded and High Schools of Whitesburg, Ky. While the head of Whitesburg High School, the enrollment grew from 134 with four teachers to 285 students and nine teachers.

He died at Crestwood, Ky. Oct. 18, 1940, at the age of 62. He married Mary Ethel Harshbarger Sept. 1, 1909. Three children were born to this union: Mrs. John B. Calloway, Ft. Thomas, Ky.; James R. Squires, and Mary Jane Squires of Crestwood, Ky. He had leakage of the heart, which, with complications due to overwork, caused his death.

The WHS class of 1929 had a few words for Prof. Squires that were printed in the Black Kat which follow: Prof. R. Dean Squires came here from Richmond, Ky. two years ago, to be superintendent of our high and graded school. (Note: Until the independent Whitesburg City Schools joined the county system, the director of the schools was given the title of Superintendent. After joining the county system, the title of Principal was given.)

Mr. Squires changed our method of teaching and remodeled everything. The new way being much more efficient and enabling us to take care of more students than would have been possible under the old method.

Mr. Squires is now getting what is called a good salary but it is very meager if judged according to the good he has done for Letcher County and our own City.

Although we have known Mr. Squires only two years, he has won a place in the heart of his students that will be hard to fill when we leave this institution of learning.

We, the seniors, wish to extend our hearty and sincere thanks to Mr. Squires for the help he has given us since coming to this institution.