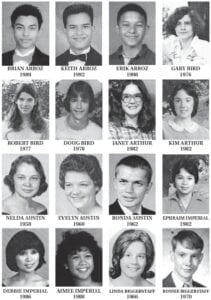 The Rev. John R. Howard of the Presbyterian Church and Evangelist William E. Hill of Hopewell, Va. brightened our week by being our guest speakers for assembly on Wednesday the 18th.

Our pep rally and dance Thursday night were a big success! After a parade and snake dance through town, everyone came on the Hill and gathered around the bonfire for yelling, school song, and some talks given by Coach Trosper and the football boys who were present. The sock hop began at 7:30 and lasted until 9:30. The rules drawn up by some members of the faculty and the senior class were obeyed willingly, and everyone seemed to enjoy himself very much. The senior class took in $38.50 from admission and the selling of Cokes and candy.

Friday the senior class met to consider ways of raising money for our trip to Washington, to collect all magazine money, and to elect officers. Our president is Sarah Jane Hall, vice president, Tommy Fields, and secretary/treasurer, Janice Fleenor. After all the money was collected and totaled, we found that we lack approximately $500 toward our goal of $1,500. Selling these magazines is one of our best ways of making money, and I think our goal can be attained if we only try a little harder! The sale has been extended until Friday of this week, so let’s get busy, seniors!

Those who received ballpoint pens as salesmanship awards for the highest magazine salesman for each day in the past two weeks were Janis Bentley, Ethlene Frazier Brown, Martha Adams, Vina Stamper, Sarah Jane Hall, Tommy Fields, and Wanda Lee Collier.

The Yellowjackets came back with a winning game when they defeated the Cumberland Red Skins 26-0 on Cumberland’s field Friday night. Both the Whitesburg and Cumberland bands gave very impressive performances during the halftime intermission.

Monday was a big day for the senior band members. At activity period they met in the band room and were measured for their longawaited band jackets. The jackets should be in within six weeks; then there will only be a small thanks for the hard work that most of the following students have done in the Whitesburg Band in the past as well as the present year. They are Elana Holstein, Carol Brown, Allene Gibson, Jo Ann Adams, Jimmy Halcomb, Bob Stansberry, Rosemary Collier, Dan Polly, Charles Kincer and Joe Gentry.

At second period on Tuesday all kinds of ohs and ahs could be heard as the announcement was made that we would get our senior rings on Wednesday. After almost 12 years of hard labor the senior class members are now realizing as we proudly sport our rings that we’ve finally made part of our goal.

There will be a pep rally and bonfire at 6:30 tonight (Thursday) beginning at the Rainbow Grill. It will be the same as before with the sock hop at 7:30.

(The above article from the Yellowjacket Yearbooks and the September 26, 1957 Mt. Eagle)