Number 6 Quarterback for the Jackets is Bert Bradshaw. Bert has played football for four years and plays defensive halfback when he’s not leading the Jackets’ offense. The 5’9”, 155-pound senior is the son of Carter and Pat Bradshaw.

Wearing number 79 for the Yellowjackets is John Mullins. The 6’2”, 245-pound tackle is the son of Johnny and Nevalia Mullins. Mullins has been a football player for four years.

Number 33, David Holbrook, is the son of Eddie and Corene Holbrook. David fills the positions of offensive tailback and defensive halfback. Holbrook is 5’11” and weighs 165 pounds in his fourth year of football.

Son of Vernon and Shirley Frazier, Randy Frazier is number 40 on the Jacket roster. Randy doubles as a blocking back and halfback on offense and plays a defensive linebacker. In his fourth year as a football player, Frazier stands 6’4” and weighs 195 pounds.

Son of Ulysses and Rose Gibson, David Gibson wears number 27 for the Orange and Black. David plays fullback offensively and defensive end. Gibson is 5’10”, 170 pounds and has served as a Jacket football player for four years. 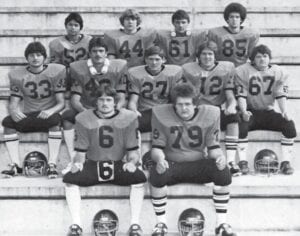 Number 12 is Kenneth Burton. The 6’1”, 185-pound end plays both offense and defense as a four-year veter- an of the Whitesburg team. Kenneth is the son of Kenneth and Vernell Burton.

Greg Cornett, number 67, is the son of Olan and Loreva Cornett. The 5’7”, 165-pound offensive guard has been a member of the Jacket football team for four years.

Number 52, Emphrim Imperial, is the son of Napoleon and Zenaida Imperial. Emphrimisa5’6”,135-pound guard for the Jackets. Morgan Blair is the son of Mr. and Mrs. Hillard Blair. The offensive fullback and defensive linebacker, wears number 44, stands 5’9”, and weighs in at 180 pounds.

Ricky Smith, number 61, is in his fourth year in an Orange and Black jersey. Rick plays in the offensive guard position in addition to his defensive linebacker position, which he has made his specialty. The 5’10”, 170-pound Yellowjacket is the son of Ellis and Geraldine Smith.

Stephen Burke, number 85, is a four-year veteran of the Jacket team. Burke plays the end position offensively and works as a safety on defense. Stephen is the son of Bob and Mary Burke, is 5’11”, and weighs in at 150 pounds.

(The above article from the September 3, 1981 Letcher County Community Press and the 1982 Yellowjacket Yearbook)

The key to success for the 1981-82 Whitesburg Yellowjackets rests with whether the team’s inexperienced line is able to come through during the remainder of the season, according to head coach James Gose.

“I feel if we can get a little experience in the line, and barring injuries, we can have a real good ball club,” says Gose. “We’ve got the potential, but our line has to come through.”

“When you lose boys like that it’s tough,” says Gose. “Four of them made all-conference (EKMC) and they all could have gone both ways for us. We only lost nine seniors but most of them were on the line.” Though the line was unable to stop the big play in a 27-7 loss to Middlesboro Friday night, Gose remains optimistic that the replacements he has called on will do the job.