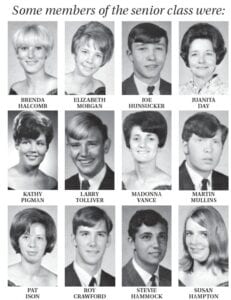 The game between Whitesburg and Wheelwright provided a very exciting night. Whitesburg’s defense was very alert and gave only three first downs to Wheelwright. George Adams, Joe Hunsucker and David Wright led in tackles. Bruce Day, a junior quarterback, scored three touchdowns. Joe Hunsucker and Mike Combs both seniors, each scored one touchdown. David Wright caught a very good pass and ran the ball 35 yards. The strong defense held Wheelwright and gave Whitesburg a winning game. The team played hard and gave their 100% effort which made the final score a booming victory for W.H.S. 34-0.

The WHS Science Club has once again become active after finding a new sponsor. In past years, Edgar Banks sponsored the club, but he became ill at the beginning of this year and had to leave school. During the first semester, the club was without a sponsor. Now, Dan Polly has filled this position. The Science Club is planning to become affiliated with the Kentucky State Science Club. It should be an interesting and successful year for the club.

Senior center Jeff Hunsucker has been chosen to play in the East-West All-Star game to be held in Lexington on August 5, 1968. Jeff is one of the 28 members of the East squad. It is a great honor and privilege to play in this game. The staff of the Kat congratulates Jeff.

On Wednesday, April 17, the Yellowjacket Staff held the dedication of our yearbook, The YellowJacket. Donna Potter, editor of this year’s Yellowjacket, presented Mr. Burkich, our principal, with the first annual. He, in turn, presented Miss Yellowjacket, Marcy Adkins, with her annual. According to the W.H.S. tradition, the Yellowjacket is dedicated to a rare individual who has contributed much to the life at W.H.S. This year is no exception. An encouraging smile, a helpful word, a willingness to help, and a great sense of humor are some of her traits. She has that unusual ability to make something out of nothing. We owe much to this outstanding person, and as a token of our esteem and appreciation it is a great honor that we dedicate the 1969 Yellowjacket to Juanita Day.