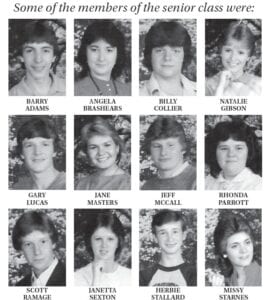 Ingrid Imperial has been chosen as this year’s Good Citizen. This award is given annually by the Pine Mountain Chapter of the DAR. Ingrid was selected by the faculty of W.H.S.

Diane Hylton won the regional “Handicap Essay.” She will be competing in the state competition later this year.

Mr. Lester recorded tapes of the students playing scales and two pieces of music. The tapes were sent in and Mr. Lester should receive the results in four to six weeks.

The cadets in the Junior Reserves Officers Training Corps have had several visitors in the past few months.

Sheriff Ben B. Taylor presented a slide show and spoke to the class about his army career. He was a member of the prestigious Green Berets during the Vietnamese War. The cadets enjoyed Sheriff Taylor’s interesting presentation.

First aid plays an important role in the JROTC program. Cadets have been studying basic first aid techniques for the past two months. Mr. Newman, an employee of South East Coal Company, presented two classes on basic CPR procedures. Cadets had the opportunity to practice CPR procedures on an “Annie” doll. The classes were enjoyed and appreciated by everyone involved.

The JROTC program offers all cadets the chance to receive a scholarship. Ellis O. Maggard is the first cadet from Whitesburg High School to receive this scholarship. Ellis went for an interview at Eastern Kentucky University last February. He was accepted and will be entering EKU this fall.

The JROTC cadets recently had a dance. Cadets brought tape recorders for entertainment. Soft drinks were donated by Coke and RC bottlings companies. The dance was a huge success as cadets had a great time.

On October 14, the Whitesburg Chapter of F.H.A. held a reception for Audrey Carr, State Director of Vocational Education.

We are also planning a Thanksgiving Basket and a Christmas Mixer. The initiation will be held at Buckhorn High School. We will also be holding a F.H.A. banquet and will have a Valentine Sweetheart.

Ray Yeary, Parliamentarian for the Whitesburg High School Chapter of the Distributive Education Clubs of America, is also serving in the same capacity for Region 6.

On November 9, 1983, Ray attended the Region 6 officers workshop held at Hazard High School. The meeting was for the purpose of working on the script and planning the Regional Career Development Conference to be held in January.