The Whitesburg High School band was organized under its present director, Mr. Hugh Adams, in 1937. It has participated in festivals since its beginning and is proud of the fine record maintained down through the years. The band presently has a membership of 72. Thirteen of the group were members of the all-festival band which climaxed the three day Southeastern Kentucky Music Festival here Saturday. Two members appeared in the all-state band.

Whitesburg High School Band has been organized one year and has been very progressive for that year under the direction of Hugh Adams. A meeting held Monday night of the band parents passed by unanimous vote to purchase uniforms. The uniforms that they are planning on purchasing will soon be on display for public approval. We are asking full cooperation from the public in this undertaking. We want to keep this high school band going. Experience has shown that the band is a builder of character, training in good health and a preparation for earning a livelihood. What other training or activity offers such a useful training for developing a boy or girl as band and orchestra training in the high school? 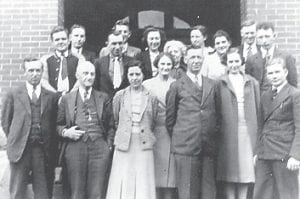 A band promotes the interest of the school and community. Money spent in preparing these young people comes back to the community quickly and increases many fold. A band is a splendid builder of democratic group spirit. Here is a common interest which brings all classes together on an equal basis. There is no better advertising for a community than a well established permanent band. So let us get behind this band and have it ready for our parades. Let’s dress them up so we will not be ashamed of them when they compete with other bands in uniform. Hugh Adams, Director

(The above article from the November 9, 1939 Mountain Eagle.)

It is written in the Good Book to “ask and you shall receive,” which is exactly what our Letcher County Band leader, Mr. Hugh Adams, and Miss Elline Sayler did. When it developed that insufficient funds were available locally to take our fine band to Lexington, to compete for state honors. Miss Salyer at Mr. Adams suggestion, wrote Mr. J.D. Hill, President of the L&N, asking that the railroad lend a helping hand. Mr. Hill promptly replied that it was not the policy of the railroad to do this kind of thing, but in as much as the miners were not working and business conditions were such that it would be hard for the band to get local sponsorship, that a special car would be attached to the regular passenger train which will leave Whitesburg Thursday morning, May 8, for Lexington, and will be there to bring them back Saturday night. They will arrive in Whitesburg the following Sunday morning.

The Letcher County Band became eligible to participate in the State Tournament when they competed in the regional tournament at Pikeville and won a rating of “Superior.” The band of course, will be accompanied by Mr. Hugh Adams, band leader, and chaperoned by Misses Elline Salyer and Martha Jane Potter and Mrs. Jack Caudill. “And here let us say three cheers for the old reliable and our Letcher County Band.” So strike up the band, musicians, and may the honors be all yours!

(This article appeared in The Mountain Eagle
May of 1941.)

Last Saturday night in the gymnasium at Whitesburg, the annual banquet was given by the juniors in honor of the seniors. Following is the menu and program: The menu consisted of grapefruit cocktail, pickles, dressing, baked chicken, mashed potatoes, creamed peas, blushing apples, hot rolls, perfection salad, cakes, nuts and ice cream.

The juniors and seniors broke bread together. The menu, prepared and served by the ladies of the Methodist Church, and was well planned and executed. Everyone was served bountifully and of the very best.

T.G., the toastmaster, was in his proper sphere, introducing the speaker and players. He said, “Ladies and gentlemen, old and young, good looking and homely, juniors and seniors, Methodists and Presbyterians, Democrats and Republicans, we are glad you are here”.

Coy was Coy, especially towards the ladies, and delivered his welcome in such happy style that we feel at home. Olen’s response was timely and appropriate. The music was of high order. Whitesburg should be proud of her musicians. They play everything from the triangle to the piano. Miss Dixon was there with her “bow”, Miss Hale at the piano, and others with violins, horns, etc. Everyone enjoyed the occasion.

Old Depression, with his heart-sickening suggestions, did not get a look in. He was not invited, and would have been surprised and disgusted with such an assembly. The boys wore neat suits, not extravagant. They were handsome young fellows, in their opinion at least, sober, discreet, smokeless.

The girls were robed in the latest and best styles, pretty girls in pretty dresses. But it was the study of years that made their eyes so bright, and gave them grace in speech and manners. There was just a little tinge of sadness in all hearts when the popular and intelligent junior, Miss Banks said the farewell, but “parting was sweet sorrow”, H.H. Harris.

(The above article from the May 5, 1932 Mountain
Eagle.)
Whitesburg beats Hazard

and ends a successful

The Whitesburg High School basketball team romped over the representatives of the Hazard High School here Tuesday night to the tune of 22 to 9, Whitesburg’s second victory over Hazard this season.

In a preliminary game the Whitesburg “B” team handed the Hazard reserves the short end of a 22 to 12 score.

This brought to a close the most successful basketball season in the history of the school. Out of a schedule of 21 games the Whitesburg boys won 17 and lost 4 and stacked up a total of 547 points against 396 for their opponents.

The basketball boys were each given the privilege of inviting a high school girl to accompany them and they were also escorted by some ardent basketball supporter, their meal being paid by him.

Professor R. Dean Squires acted as toastmaster, introducing the team and escorts. Music was furnished by Mrs. Albert Jones at the piano and Mr. LeRoy Fields on the saxophone, and was greatly enjoyed by all. A humorous reading was given by Mrs. Jones. Two trios, “Mah Lindy Lou,” and “My Curly Headed Baby,” were sung by Mesdames Miles Moore and R. Dean Squires.

The banquet came to a close by singing of “Auld Lang Syne,” each guest departed expressing what a happy occasion it had been and this recorded another memory in the history of Whitesburg High School.