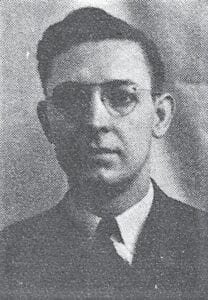 Whitesburg High School and the town of Whitesburg have been fortunate during the past years in having a man of Hugh Adams’s caliber to train young musicians. As we think of that good fortune, we sometimes fear that the town and the school might have become so used to the talented Mr. Adams that both take him for granted as a permanent fixture and it is always a mistake to take anyone for granted.

We hope and assume that Hugh Adams will be a permanent fixture but we wish to warn that other towns are seeking men to fill their musical needs and those towns usually have to settle with men much less capable than Mr. Adams and those other towns might make attractive offers. If so, we hope Hugh likes us enough to ignore those offers.

It isn’t a question of whether Hugh likes us or not, however, for he has shown his like by staying on and furnishing us with a high school band which trends toward a higher type of music and many of his students have gone on to make good in college bands. As an example we point to one of last year’s graduates who is now playing with the famed “MARCHING 100” of the University of Kentucky. Now it is up to us to show our like for Hugh and we can best do that by backing the band whenever we are called on to do so, whether by attending a benefit or cheering a performance.

The best rewards of men who follow Mr. Adams’s profession are seldom monetary. Those men would much rather hear the applause of an appreciative audience, such an applause or praise for their pupils being more joyful than an added greenback to the paycheck, although the latter is always a big help in a profession which doesn’t exactly make one rich.

We might think teaching music to youngsters isn’t such a hard job, but a little thought on the subject convinces us that even the most talented child doesn’t pick up an instrument and immediately start playing in harmony with a group. In a band as on an athletic field, teamwork counts and hours of practice is required in order to develop that teamwork. We sometimes look on Mr. Adams as we do an athletic coach who has raw material coming up every year to replace graduating performers. Yet we fail to grade him as we grade an athletic coach according to material. Our reason for not grading Mr. Adams is the fact that he always turns out the best caliber of high school band at Whitesburg. Folks have become so used to that higher type of band that they fail to distinguish between each year’s bands, which is a compliment to the band instructor.

However, if suddenly Mr. Adams should present a band which wasn’t up to the caliber of those bands he has had in past years, we would all probably notice the difference right away. We should also notice each year as he turns out his outstanding bands.

We are proud of Hugh Adams and the town should also be proud of him. He has given a lot of his time and talent, as has his equally talented wife, to the students of Whitesburg and Letcher County and his rewards have been few as far as the average citizen is concerned. We are consoled to know that Hugh has received many rewards from his former students as reports from colleges where those students enroll have invariably been excellent, as excellent as the teaching of Hugh Adams.

We would miss Hugh. Let’s make sure and let him know how much we appreciated his work.

(The above article from the December 18, 1952 Mountain Eagle)

“Student Queen”, a threeact comedy by Lynn Rurtland, will be given by the Whitesburg Senior Class of 1953 at the Grade School Auditorium, Tuesday evening, April 21, at 7:00 p.m.

Others in the cast include Miss Haley (Betty Gail Whitaker) the “lady boss” who found (Gay Banks), “king of the festivities”; and John Hawkins (Elmer Banks); and George Benson (Billy Sergent), the troubled father of the rival queens.

At last, but by no means least, Miss Driscall (Anita Holbrook), who is interested in beautifying all mankind.

At the November meeting of the Whitesburg P.T.A. last week, the parent-teachers organization voted to spend $950.00 on the school library this year.

Six hundred dollars of that money will go to replace old books and supplies and $350.00 will be used to complete the state requirement of $1.25 per student each year.

Prior to a call for vote on the library allowance, Professor Millard Tolliver explain that $1.25 is required, by the state, to be spent for each high school student for library books each. At that rate, Whitesburg is to pay $850.00. The County Board of Education paid $350.00 of that amount.

(The above article from the November 13, 1952 Mountain Eagle)

We have a variety of clubs at Whitesburg High School this year. Some of them are:

THE BIBLE CLUB, directed by Mr. Stallard, has a total of about 50 members. The officers are President Coleen Craft; Secretary-Treasurer Wyona Craft. They study and discuss the Bible and each Monday a minister in town comes up to talk with the students.

THE SPINSTERS CLUB, directed by Mrs. Pigman and Miss Wampler, has 60 members. The president is Billy Ann Whitaker, Vice President is Lois Mullins, and Anita Fields acts as Secretary Treasurer. It is a social club and they discuss dating and etiquette. The gals aren’t allowed to speak to any boys on Fridays, and they are charged 10 cents if they do!

THE WORLD AFFAIRS CLUB, sponsored by Mr. Boggs and Mr. Collins, has 22 members. The President is Larry McKnight, Vice President is Nadeane Amburgey, and Secretary-Treasurer is Donna Tolliver. Their object is to discuss international as well as home affairs.

SCIENCE CLUB, one of the oldest, is sponsored by Prof. Edgar Banks. Composed of 31 “brains”, it is affiliated with the Ky. Junior Academy of Science. Officers of the club are: President Bobby A. Kincer; Vice President Gay Banks; Secretary Barbara Lewis.

F.H.A. Friday, October 3, was a big day for the freshmen and other candidates for F.H.A. membership. The candidates were ordered to dress as Daisy Mae’s — everybody had a wonderful time! The candidates were required to know the prayer, song, colors, flower, emblem, and purpose of the F.H.A.

On the following Monday, there were 17 candidates initiated… they were given a red and white ribbon which they had to wear for three days. The new members will be admitted to come to folk games every other Monday night with the other members.

(The above article from the October 1952 Black Kat Newspaper)

Mr. Myrel Brown is a native of Esserville, Va., and son of C.A. and Birgie Bolling Brown.

He lived on Cumberland River for 15 years, married Miss Virginia Gibson, daughter of the late Hop Gibson, and at present resides on Little Cowan. They have two sons, Joseph Myrel, 10, and Stephen C., 7, and both attend Whitesburg Grade School.

Myrel is an experienced teacher, having taught in elementary schools for 6 years, one year in high school, served as attendance officer for 7 years, also served as elementary supervisor (or helping teacher).

He is also an active Rotarian, being president of the Whitesburg Rotary Club.

(The above article from the April 2, 1953 Mountain Eagle)