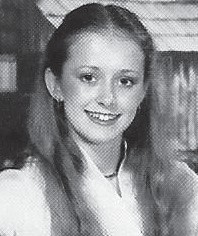 At 1:00 a.m. on Friday morning, November 8, 1980, the Whitesburg High Varsity Cheerleaders left Whitesburg for Columbia, South Carolina where they were to compete in the Southern Regional of the United States High School Cheerleading Championship. The squad received the invitation to the regional after an outstanding showing at the Universal Cheerleading Camp at East Tennessee State University in Johnson City, Tennessee this past summer.

The cheerleaders arrived at Columbia, South Carolina at approximately 10:00 a.m. While waiting to check into their rooms at the Holiday Inn City Center, the cheerleaders were very excited to learn that the Doobie Brothers were also staying in their hotel. The cheerleaders succeeded in getting their autographs and talking with several members of the band. 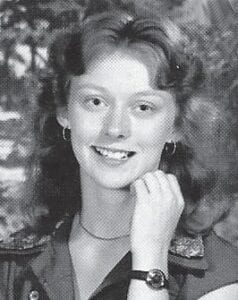 On Saturday morning the cheerleaders were in competition with fifty-one squads in the varsity division. The squads were from Florida, South Carolina, North Carolina, Kentucky, Tennessee, Virginia, West Virginia, Alabama, Georgia, and Mississippi. The cheerleaders performed a three-minute routine consisting of sidelines cheers, gymnastics, pom-pom routine and building pyramids with floor cheers. When the results were announced and the cheerleaders heard the P.A. announcer say, “Third Runner-Up Whitesburg!” they were thrilled beyond words. They realized that all of the long and hard practice sessions had finally paid off. At 9:00 a.m. Sunday morning they boarded their “baby bus” for the long but happy ride home.

(The above article from the December 11, 1980 Community Press) 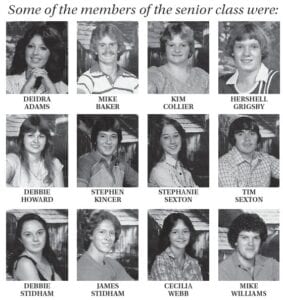 Teresa Nichols, daughter of Mr. and Mrs. Jimmy Nichols of Sandlick, is honored as Valedictorian of the 1981 graduating class. Teresa is an active member of the Math Club, having won second place at Clinch Valley College, and was a Grand Marshal at the 1980 Graduation.

Teresa is enrolled at the University of Kentucky for the fall term with plans to major in Computer Science.

Victoria Johnson is honored as Salutatorian of the 1981 Whitesburg High School graduating class. Vickie, the daughter of Mr. and Mrs. Lindberg Tolaver of Partridge, has been an active member of both the marching and the concert bands for four years. She received an excellent rating on a solo performance at Pikeville College.

Vickie is enrolled for the fall semester at Georgetown College, where she will receive a Pastor’s Christian Leadership Scholarship. Her plans are to major in engineering and later to continue her studies at the University of Kentucky.

Students and faculty were asked what they did over the summer break. The following are some of their responses. I went swimming and waterskiing at the lake- Tammy Bentley. I rode a helicopter. -Michell Sexton. I spent the summer in the hospital-Dewana Frazier. The most I did was make my daughter get her driver’s license-Mrs. Thomas. I went to baseball camp at Morehead for a week, went to Mammoth Cave, and worked around the house-Mr. Roe. I went to Gatlinburg-Claude Little. I went to Washington and I got to see Rosalynn Carter and Amy Carter- Ray Gish. I went to Atlantic City, Pennsylvania, and Maryland-Ingrid Imperial. I visited U.K., Berea, and flirted, and went to Cherokee Lake-Sherry Waller. I played baseball and went swimming-David Bailey. I taught three Bible Schools- Tammy Swanner. I cut grass, played tennis, and I went waterskiing-Chris Combs. We went to Washington, D.C., and toured the Smithsonian Institution and Arlington National Cemetery- Mrs. Arthur. I went to cheerleading camp and 4-H camp and went swimming-Beth Lucas. I went to Florida-Ellis Maggard. I hijacked a plane to Cuba and got caught over the Atlantic Ocean-Mr. Salyers. I went to a peanut butter chewing contest and got beaten by a kid with three rows of teeth. I also went to a health spa on women’s day and got run out-Danny Gilbert. I spent half of the summer at Clinch Valley College and the rest of it I loafed-Nancy Huff. I went to Siberia and mushed huskies across unfrozen lakes-Angie Miranda.