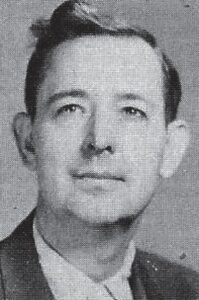 Closing exercises for the High School of Whitesburg were launched on Sunday when the baccalaureate sermon to the graduating class was delivered by Rev. Ernest Wilson, of the Presbyterian Church, in the school auditorium.

The Processional and Recessional was furnished by Miss Jeanette Lewis. Special music selections were rendered by Rosalee Collins.

On Tuesday evening, May 18, Class Night was observed by the senior class with an address by Billy Sumpter. Cecil Webb, Jr., gave the Class History and Nell Vermillion the Class Prophecy. Norma Ruth Bates was Giftorian. The Class was presented by Wilma Faye Sumpter.

An added entertainment feature of the program was “Pseudo-Instructors” by members of the senior class.

The music program for the evening was given by the Senior Class, under the direction of Mrs. Millard Tolliver, and included the song “Senior Classmates” by the class. 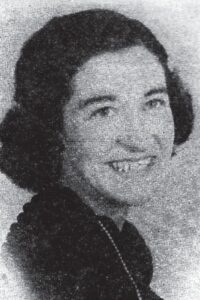 Two graduates, Wilma Faye Sumpter and Cecil Webb, Jr., received the Danforth leadership award, the book “I Dare You” for the senior boy and girl chosen for leadership.

Commencement exercises for the graduation class of the High School, numbering 79, were held on Wednesday evening, at 7:30 o’clock with Dr. L.G. Kennamer, of Eastern State Teacher’s College, addressing the graduates in an inspiring and timely talk, reciting outstanding virtues of many characters in the ancient history of Greece and Rome, such as courage, fortitude, perseverance and faith in God, and admonished the graduates to acquire and use these fine prerequisites toward achieving an abundant and successful life as their goal.

The Salutatory was given by Wilma Faye Sumpter and the Valedictory by Nell Vermillion. The diplomas were presented by Supt. Miss Martha Jane Potter.

The Invocation and Benediction were offered by Rev. Paul Stewart of the Methodist Church. Hugh Adams, as pianist, gave the Processional and Recessional.

Special music included a solo by Patsy Ann Fields, and selections by the Glee Club.

All the papers have been full of reports of basketball games and tournaments for the past month. Little has appeared in The Mountain Eagle about Whitesburg High School boys but it is not too late to let them know that we are very proud of our basketball team. The Whitesburg High School boys have played under great difficulty. Having no gym, they bus at 4 o’clock to Fleming for practice, then home about 8:30. At the Letcher County Tournament held at Stuart Robinson School, Whitesburg played the final game against Fleming and became the champions of Letcher County.

More than two hundred fans went with our boys to Hazard to see them play in the District Tournament against Leslie County High School.

Coach Pigman has done a wonderful piece of work with our boys and we are proud of our team.

A high class program, given by Whitesburg School boys and girls on Wednesday night to a capacity filled auditorium, will be long remembered. The program opened with our 62-piece Band A, in their pretty blue and gold uniforms, so neat and refined, well behaved and cultured in their appearance, first under the baton of Jack Cornett, guest conductor, visiting during the week from the University of Kentucky. Our band master, Hugh Adams then took the baton and directed the two contest numbers. This is the final formal appearance of the band before they go to the district contest at Harlan on April 3. Following this performance of the Band A, Mr. Adams presented his B Band, composed of 13 boys and 21 girls mostly from lower grades. They played exceptionally well and with the years ahead will become a great band by the time they reach high school days.

The Junior Chorus, composed of 58 boys and girls from the seventh and eighth grades, a new organization, made its second public performance. They will go to the District contest. The Junior Chorus sang three numbers each directed by high school girls; Green Cathedral directed by Wilma Fay Sumpter, The Snow Flake, directed by Patsy Ann Fields and Bells of St. Mary’s directed by Rosalee Collins.

The last performance was the High School Girls’ Glee Club. There were 34 young ladies very lovely in evening gowns, sang seven numbers. They were trained and directed by Mrs. Tolliver, with Miss Jeanette Lewis as accompanist. These young ladies, their director and Miss Lewis have worked hard and they presented a beautiful program. We just wonder how they can receive any rating below Superior at the District Contest.

The school appreciates the cooperation of all the patrons and citizens who attended this program. The receipts will be used to pay expenses of the contestants to Harlan.

(The above article from the April 1, 1948 Mountain Eagle)

(The above article from the 1948 Black Kat Newspapers)