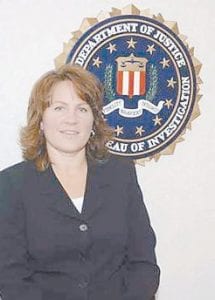 has seen it all as

By training, FBI agents learn that emotional detachment is a must in dealing with the most searing of tragedies. In her years working for the Federal Bureau of Investigation, Tiphanie Bates had helped dig through the wreckage of a lane crash that took 68 lives.

She’d been briefly assigned to San Francisco at a time when the FBI was hot on the trail of the Unabomber.

During the days that immediately followed the cursed date 9/11/01, Bates — as a team leader of the Indianapolis FBI office’s evidence rescue team — had been among those sent to Shanksville, Penn., to shift through the remains of United Flight 93.

“Obviously, any time you are dealing with a mass death, it’s all very, very sad,” Bates says. “But we’re trained to focus narrowly on our job and not get emotionally attached.”

After about two weeks in Shanksville, Bates and her team were sent to New York City. There they joined the process of sifting through the heap of rubble that had once been the towers of the World Trade Center. There, experienced FBI Agent Tiphanie Bates felt her detachment waver just a bit.

“Ground Zero bothered me,” she said, especially finding the boots.

In the rich history of basketball in Kentucky, few dates have more significance than March 26, 1983. That afternoon in Knoxville, Tenn., the Kentucky Wildcats and Louisville Cardinals faced off in men’s basketball for the first time in 24 years. A Final Four berth rode on the outcome of the NCAA Tournament’s Mideast Regional finals.

In the Letcher County seat of Whitesburg, the date has a diff erent significance. Just hours after Louisville’s thrilling victory over UK, the girls’ basketball team from Whitesburg High took a 39-0 record onto the court at Eastern Kentucky University’s McBrayer Arena for the state championship game against Warren Central.

On a Whitesburg team that included future 1985 Miss Basketball Brigette Combs (a sophomore in ’83), the team’s leader and leading scorer (22.5) was senior point guard Tiphanie Bates.

“She was one of the few point guards I ever had where the point guard was the main scorer, too,” said John High, who coached Whitesburg High in 1983 and has gone on to become one of the winningest coaches in Kentucky girls’ basketball history. “We set a lot of picks for her.”

By halftime of the state championship, Bates had 21 points. That was also how many points she’d finish with. With 7:44 left in the third quarter, Bates accidently stepped on the foot of a Warren Central player. For of all sad words of tongue or pen, the saddest are these: It might have been.

“I didn’t play much after that,” Bates said. “I’m not implying it’s the reason for what happened, but when you take out a senior leader, the point guard, it always hurts the team.”

“I remember that game so vividly,” Bates said. “Even now, I can play back parts of that game I my mind as clearly as if it was yesterday.”

Long before she became a high school basketball star, the younger of Gardner and Barbara Bates’s two children had a life plan mapped out. “From the time she was real little, she always said she would be a lawyer,” says Barbara Bates of her only daughter.

After earning her undergraduate degree at Morehead State while spending four years as a basketball starter, Tiphanie Bates came to the University of Kentucky Law School. By her third year at UK in 1990 she envisioned a career as a prosecutor. Pretty much as a lark, Bates agreed to accompany a friend to meet a recruiter who’d come to UK from the FBI.

The introductory videotape the FBI played that day, showing the rigorous physical and mental standards it would take just to make it through the FBI Academy in Quantico, Va., would have intimidated many. “It just looked so challenging,” Tiphanie said. “I was like, that looks cool.”

Even after she’d taken her law degree successfully and made it through the FBI training, the goal was still to become a legal counsel for the Bureau. However, Bates says even the FBI’s attorneys are required to start out working as field agents.

She was assigned to Indianapolis. “My three years as a street agent, I just enjoyed it,” she says now. “I liked working investigations. To me, challenge is to find the right people with the right evidence to build a case.” She’s never left “the field.”

In the mid-1990’s, as the federal government turned up the heat in its pursuit of the man who had become known as the Unabomber, Bates temporarily assigned to the San Francisco office as part of that case. Theodore Kaczynski was arrested on April 3, 1996. “My involvement in that was very limited, not 10 years like some of the agents who really worked that,” Bates says.

As part of the Indianapolis FBI branch’s evidence rescue team, Bates worked on the 1994 crash of an American Eagle commuter flight in Roselawn, Ind., that killed 68. Seven years later, it was that experience that sent her first to Shanksville, Penn., and then to New York City to comb through the grim aftermath of 9/11/01.

You think your job is tough? Try mapping and taking photos of the site of a mass-casualty disaster. Gathering any body parts of the deceased into plastic bins. Scouring through rubble and debris for any personal effects of the dead. “It can be difficult,” Bates said. “You have to stay emotionally detached. I always try to look at the end picture, that if I do my job well, then maybe we find the piece of evidence that gives a family closure. You learn how not to personalize the things that you find.”

When her team was sent to the site of the former World Trade Center, that proved difficult. Part of that difficulty was seeing up close and personal the images — the collapsed twin towers, the smoking rubblethat had been seared into American’s consciousness of TV.

Most of it was a particular finding at Ground Zero that made it all but impossible not to feel deeply the human loss. “We found firemen’s boots that still had the feet in them,” Bates said. “I’m pretty good at staying emotionally detached. That was tough.” If you’re wondering, Bates says she does not have nightmares over anything she’s seen in the line of duty. “Oh no, the Bureau is very good about providing counseling if you need it after those kind of things,’ she says. “You just talk it up and get it out if there are any issues.”

The melancholy figure of the high school sports star whose life peaks with his or her teen-aged athletics exploits is familiar. This is definitely not one of those cases.

Not long ago, Bates was in Tbilisi, the capital of Georgia, the former Soviet republic that is now independent. She was helping train Georgian law enforcement officials in crime scene management as part of a joint FBI/U.S. State Department program.

“I can’t say that every day working for the FBI is exciting,” Tiphanie said. “I can say pretty much every day is interesting.”