The new Whitesburg gymnasium, nicely decorated with flowers, evergreens, and gay colors and with a large welcome sign displayed, was the scene of a large gathering for a superbly executed program and dedication of the new building Tuesday afternoon of this week.

First the invocation was given by Rev. Marion E. Parker, followed by introductory of V.D. Picklesimer, member of the State Board of Education. Mr. Picklesimer praised the new building and those responsible for its existence, also citing other improvements such as five other new county school buildings, the lunchroom now caring for thousands of school children, these being made possible during the administration of Martha Jane Potter and the school board members.

Miss Potter was introduced and told how the building had progressed, the cornerstone being laid in May, 1948, and that her dream of a finer and better school system had come true, that it had been a pleasure for her to serve. She stated that it was her hope that the building would stand as a symbol of the finer and greater things of life. She then introduced Mrs. Ruth Tolliver and the Whitesburg Glee Club who gave a very fine selection. 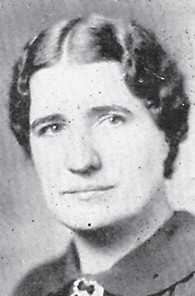 The names of school board members were read, the present members including Ben A. Adams, chairman; Kerney Day, Ray Collins, Willie Bentley and Pearl Dixon.

Mr. Sandford of Henderson, Commissioner of the Kentucky High School Athletic Association, greeted the gathering. He stated it was his pleasure to serve some 500 high schools in Kentucky and that he had previously served as coach, principal, and superintendent and knew the struggles of those who serve in these capacities. He stressed the importance of physical education and contrasted the diff erence between yesterday’s education and today’s.

The new building was then presented by Miss Potter to Prof. Millard Tolliver who accepted it in behalf of Whitesburg High School and pledged to keep it up to par in every respect. The meeting adjourned with music by the bands.

The Yellowjackets won the 53rd District basketball tournament Saturday of last week by defeating the Jenkins Cavaliers 35 to 32. High point men for Whitesburg were Tolliver and Sexton with 9 each. Adams paced the Cavaliers with 11 points.

The second game on Thursday was a defeat for Stuart Robinson at the hands of the Yellowjackets. The final score was 54 to 35. Duncil was high scorer for Whitesburg with 22 points.

Enrollment at
Whitesburg High reaches
585 this year, according
to Principal Millard
Tolliver (1946-1953)

Regular classes for this year’s school term were started last Wednesday at Whitesburg High and Grade School’s and the students have been meeting every class period since, according to Millard Tolliver, Principal. Labor Day was not a school holiday.

The Whitesburg schools have 33 teachers this year. The following new classes have been added to the curriculum: art (last year there was an Art Club but no classes in the subject), two classes of sociology for the seniors and two classes in general business for the sophomores. The commercial department has been enlarged this year with five classes in typing and one in shorthand. There are 135 taking typing, Mr. Tolliver said, and 25 taking shorthand.

The lockers for high school students will have combination locks this year so no student need to purchase a lock before coming to school. The lock will be loaned as a part of the rental price of the locker. The use of combination locks will eliminate lost keys and damaged lockers. Millard Tolliver, Principal.

The Whitesburg Yellowjackets will have their first football game of the season this coming Friday when they meet the Prestonsburg team on the Whitesburg field. Forty-eight boys are out for football at Whitesburg High this year.

During commencement week, there will be an art display by students. The exhibits will be shown in downtown store windows. Miss Pauline Amburgey is the art teacher. The entire junior and senior classes of Whitesburg High School have been invited to be guests of Sam Isaac at the Alene Theatre this evening (Thursday). After the Junior- Senior Banquet, the entire group may attend the movie “Dangerous Profession” starring Pat O’Brian, Ella Raines, and George Raft. It is hoped that this will become an annual event, Mr. Isaac said.