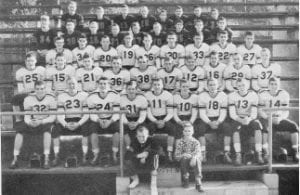 Buddy Fields was one of the most popular football players to wear the orange and black, playing five years and lettering four. He received 16 varsity letters, which is a record for Whitesburg High School, lettering all four years in football, basketball, baseball and track. He also holds the record for collegiate touchdowns by a Whitesburg graduate: 8 at Morehead State. The second place holder is Bobby Kincer, also at Morehead State, third is Bill Stamper at Olivet and fourth is William Wright with 2 at Eastern Kentucky State University.

Buddy Fields signed with Tennessee out of high school, but found it to be too big and transferred to Morehead. Later, he was off ered free agent NFL contracts by the Baltimore Colts and St. Louis Cardinals. He spurned both, saying he was tired of football.

He was named Courier-
Journal
first team All-State in the 1956 season (Harry Johnson of Fleming-Neon was named Honorable Mention). Both signed with UK. Hodge earned a freshman numeral and three letters. After the 1960 season, Hodge was named third team All Southeastern Conference (33 players picked). Hodge was also named Associated Press Honorable Mention on its All American Team.

Hodge played in the Blue-Gray College All-Star Game on national television, finishing second in tackles to Auburn All American Bo Strange. After the game, Hodge signed a free agent contract with the Hamilton Tiger Cats of the Canadian football league, but failed to make the final cut.

Note: I wish to express
my appreciation to a WHS
graduate and former Letcher
County resident, Roe Wright,
who now resides in Georgia,
for providing the information

and pictures in this
article.

In football the consensus of opinion is that Whitesburg’s defeat of a heavily favored Paintsville team was the best effort of ’54 on the gridiron in Coach Moore’s third year at W.H.S.

The Jackets in this second game of the season proved that desire and hustle can overcome experience and weight. In their opening game the Jackets looked sluggish and lacked the scrap expected of the team, but when the Paintsville game rolled around everyone felt that the locals were willing and ready.

Paintsville had a big, experienced, well-balanced ball club and many thought the Jackets were in for a shellacking but the Jackets showed the most vicious tackling for the year.

Paintsville’s first series of downs netted a loss and they punted, Whitesburg drove from their own 30 over for the first score of the game with Buddy Fields scoring to take a 6-0 lead. Paintsville, not to be outdone and on a pitchout to Oney, went 40 yards to score and the extra point made it 7-6. The Jackets came back with Burkey Holbrook sneaking over from the one and Jim Jones adding the point for a 13-7 half-time lead.

With the beginning of the second half, the skies opened up and the rain poured steadily, thus making the field somewhat slower and neither team able to muster too much offense, but the Jackets put together one sustained drive with Robert Meade scoring to give the Jackets a 19-7 win.