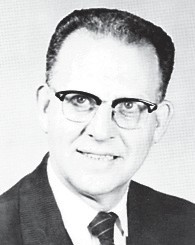 Walter Enlow, a well known citizen and teacher in the Letcher School System, died Wednesday morning at 7:00 in a Lexington hospital.

Mr. Enlow had been taken there for an operation performed Tuesday for the removal of a tumor. Doctors stated that if he lived 36 hours he would have a good chance of recovery.

A teacher for 30 of his 54 years, he had come into contact with many young people from other areas through his being active in the coaching and supervising of athletics in the Whitesburg and Fleming- Neon schools.

He was graduated from Whitesburg High School in 1929, where he began coming from Hodgenville to stay with a brother, J.E., who was the pastor of the Whitesburg Church at the time. He went on to Georgetown College and was graduated in 1933.

Active in many civic affairs, he was a charter member of the Whitesburg Lions Club, and served several terms as a member and a deacon of the First Baptist Church of Whitesburg.

He is survived by his wife, Nan Lou Enlow; a son, Jimmy Enlow, who is a teacher at Fleming-Neon High; and a daughter, Walleen, who is married to Richard Adams. The Adamses live in Louisville. 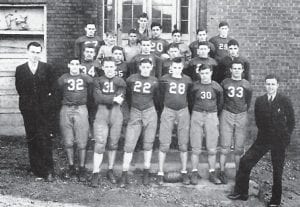 Mr. Enlow was also in the truck mine business, along with William H. Blair and Orville Hughes. They operated the B.E. and H. Coal Co.

Funeral services will be at 2 p.m. Friday the fourth of January at the First Baptist Church of Whitesburg. Burial will be at the Lewis Cemetery. Craft Funeral Home in charge.

Tributes to Mr. Enlow from WHS students: He always impressed me as a strong, silent man, who knew what he was doing and how to do it. He was a good teacher and a wonderful person. He spoke quietly, but carried a big stick. His proverb to enable you to learn was ‘Take the Board of Education to your seat of learning.’ When death took him, this world lost a wonderful teacher and a warm, friendly man. Our loss was heaven’s gain. – Roger Younce

The first of the year when I went into his room, I was scared to death because of what I had heard about him from other students, but when I became acquainted with him I saw a very nice man. – Betty Stallard

He was a very fine individual, May his precious soul rest in peace! – Robert Taylor

He was a wonderful man and a very good teacher. Sometimes he got rough with his ruler and whipped the boys, but I liked him very much. – Lynette Ison

He has gone to rest with the Lord Jesus now. – Shirley Sturgill

Mr. Enlow was respected by all the faculty members and students. – Zella Banks

Being on time was one requirement of Mr. Enlow. When I had math under him as a freshman, I thought I could have no better teacher. He was good about explaining problems so we could understand them. – Bonnie Fields

The thing which I remember most about him was his disdain for disobedience in his class. I admired him for his great courage. – Judy Hall

Everyone liked Mr. Enlow. I don’t believe he had a single enemy. – Beverly Dean Wright

I liked Mr. Enlow because he knew what he was talking about in the algebra class. – Margaret Brown.

He was a very wonderful person and a great teacher. He had a happy disposition and always greeted his students with a smile. I think the school will be missing a great man, one who can never be replaced. He may be gone from W.H.S. but his memory will never be gone from my heart. – Shirley Banks

He will be missed by all who knew him. – Fredric Bowen

A very friendly person! He was my first period teacher and also my Sunday School teacher. – Greg Amburgey

I can’t put into words how I felt about Mr. Enlow. He tried to help each one. He often read from the Bible to us. – Robbie Huskinson

As I look into the past, I remember many things of a wonderful man. Although he was hard, I still liked him; although he quarreled at us for missing a problem, I still liked him. He was one of my best teachers and I learned very much under him. – Nyoka Fugate

He used to tell us about the early days of Whitesburg when there were no paved streets and people rode horses and wagons. He told us about the days when he did the Big Apple. – Catherine Stallard

I admired him as a coach. He had a love for football that is only known by players and coaches. – Douglass Chandler

His presence cannot be forgotten at W.H.S.

What I remember most about Mr. Enlow was his loud moods. Sometimes he would be just as happy and carefree as anyone and at other times he would shout at you so loudly that it seemed almost like thunder roaring in your ears. I liked him and I think he was the best teacher I have ever had. – Peggy Adams

(The above comments from the January 1963 Black Kat.)

Graduate of Georgetown College. Although this is his first year with us, he has won the hearts of all by a pleasing disposition and loyal spirit.