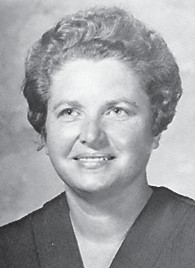 Speaker for the graduation will be Dr. John Duncan, Dean of Graduate Programs, Morehead State University. Representing the class of ‘71 as valedictorian will be Miss Valerie Kaye Adams, salutatorian Miss Melissa Ann Combs. Invocation will be delivered by Reverend Leon Wesley, Pastor of the Whitesburg Methodist Church. The benediction will be given by Reverend Bill F. Mackey, Pastor at the First Baptist Church. Presenting the diplomas will be Mr. Kendall V. Boggs, Superintendent, Letcher County Schools.

Planned after the graduation of the Class of ‘71 will be a reception held in the WHS cafeteria for parents, relatives and graduates.

The Class of ‘71, which has 149 graduating seniors, has long looked forward to June 4, 1971 and the time finally draws near. 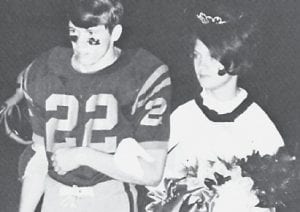 The parade consisted of 52 units including 13 floats and three bands. The parade was one of the largest for Whitesburg. The floats were from civic organizations, Whitesburg High School and a new division to the parade this year was elementary schools. As in previous years, awards were given to the winning floats. The winners in the civic organization division received trophies. The winners were: first place Beta Sigma Phi; second place Order of the Eastern Star. Cowan Grade School was the winner of the trophy in the elementary school division.

Each attendant and candidate was presented to the audience while the band played “Love (Can Make You Happy)”. Mrs. Jenny Bowen Eversole gave her 1970 crown away to senior candidate, Miss Judy Frazier, 1971 Homecoming Queen.

The climax of the 1970- 71 Homecoming was the dance at the cafeteria immediately after the game. “Me and the Mob”, a band from Jenkins, played for the dance.

(The above article from the December 1970 Black Kat.) Changing times at W.H.S.:

Guess what, everybody? Girls can wear pants at WHS! Our illustrious student council actually got the teachers to vote to revise our dress code. Thank you, members of the student council and Mr. Frazier. And thank you, faculty, for voting unanimously.

The male percentage of our school was disappointed because the change did not include anything for them, and as normal redblooded American boys, they like legs, which they don’t see much of any more. Our red-blooded American girls were disappointed too, because they like blue jeans, which they don’t see any of at school, because blue jeans aren’t considered as pants in our new dress code. I think I would be accurate to say that nearly every girl on the hill owns at least one pair of blue jeans, if not more. If blue jeans are acceptable in practically every other place that teenagers gather, why are they forbidden at school?

Almost every girl has appreciated the code revision during this time of cold weather.

‘The Other Foot’, a drama from a short story by Ray Bradbury, is about a white man (Eddie Fields), who came to all-Negro Mars to seek refuge from an atomic war that literally destroyed earth.

Embittered Willie Johnson (Joe Wegrzyn), whose father was a slave, is determined to lynch the white man against the wishes of his wife, portrayed by Estella Buttrey. After Willie realizes his revenge won’t accomplish anything, peace is made. Very heavy! ‘Ladies of the Mop’, starring Dianna Ott, Pam Honeycutt, Jenny Burkich and Maguanna Blair, was a rhythmical comedy about four mopping ladies who had visions of grandeur as stage performers.

Both plays were directed by Mr. Carl Banks and Miss Leslie Quillen (who was a student teacher from Morehead). The speech class hopes to present another play in the near future.

(The above article from the March 1971 Black Kat.)

For her understanding, patience, and wisdom that she exhibits when solving problems; For her wit, personality, kindness, and consideration shown to her students and fellow faculty members; For her presentation of knowledge in such an enthusiastic manner that promotes an insight into the area of grammar and literature; For setting and achieving the highest standard of character and integrity. We dedicate our 1971 Yellow Jacket to you, Joy Wray Breeding.

“Peace” by Lana Caudill: I died young by my own hand — For milk and honey having been denied me, I scorned bread. My years were turbulent scarred by tough passions rocked by a mind engaged in constant warring with itself . . . THERE IS NO PEACE IN DEATH.