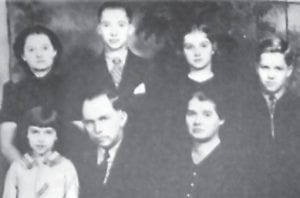 The first graduating class of WHS 1916

The first class to graduate from Whitesburg High School was the class of 1916, and it consisted of the following students: J. L. Hays, who became a lawyer and judge of the Letcher Circuit Court; G. Bennett Adams, who later was a well known Old Regular Baptist preacher, county judge and historian; and Dr. J.M. Bentley, who practiced dentistry in Whitesburg and Neon for many years.

G. Bennett Adams was born on Thornton Creek, Letcher County, May 19, 1894, died in the Good Samaritan Hospital, Lexington, March 21, 1950. He was buried in the Webb Cemetery, Mayking. He married Ella Combs on November 17, 1916 who was the daughter of the former Circuit Court Clerk Stephen P. and Martha (Adams) Combs. G. Bennett joined the Thornton Baptist Church in December, 1912 and was preaching by the age of 19. He taught school intermittently for about 15 years, accepting his first school at Pound, Va. before the age of 18.

He received his law degree with high honors from the University of Louisville in 1915. He traveled as a salesman for Armour and Company for two years in the period of 1919 to 1922. 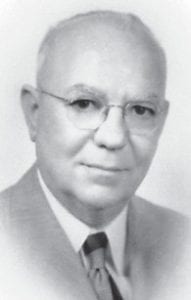 G. Bennett ran for Circuit Clerk against his future father-in-law, but got even with him on the loss by marrying his daughter. Later G. Bennett ran for County Attorney in 1934, and was elected again in 1938. In 1949 he was elected as County Judge for Letcher County and was serving in that capacity when felled by the stroke from which he did not recover.

He founded and served as moderator of the Little Ruby Church in 1949. He was appointed moderator of Little Colley Church in 1944 and continued to serve that church until his death. He also served other churches being the regular pastor of Thornton Church of Old Regular Baptist at his death. Also, he was moderator of the Thornton Union Association from its formation. He preached in many surrounding counties and was well known and held in high esteem throughout eastern Kentucky. It was estimated that around 3,000 people attended his funeral. All told, he preached over 35 years. 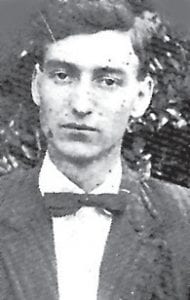 He founded and served as trustee of the Regular Baptist Orphanage on Smoot Creek. In 1936, he established the Appalachian Marble and Granite Works at Mayking, which his son-in-law, Chester Webb, operated until his death.

For several years, he published a religious paper entitled the “Old Regular Baptist”. A few years later, he published a denominational paper called “Gleanings”. This letter item was continued by Mrs. Adams for about three years after her husband’s death. He paid for his publications with marriage fees.

( The above information from the booklet, “The Webb Family” by Clayton R. Cox and picture provided by G. Bennett’s granddaughter Sharon Brown.)

Hon. J. L. Hays passed from this life Wednesday, June 19, 1968 at the Whitesburg Appalachian Regional Hospital. He was the son of David Hays and Amanda Belle Halcomb Hays and was born April 13, 1898 on Kingscreek in Letcher County, being 70 years, 2 months and 6 days of age at the time of his passing.

On November 29, 1923 he was married to Vivian Moffett and to this union was born two girls, Ann and Carolyn. He was a member of the Lions Club, the American Legion, and Whitesburg Lodge No. 754 F&AM, American Bar Association and Kentucky Bar Association.

He joined the Union Church in Berea in 1918. He leaves to mourn his passing his companion, two daughters, Mrs. Ann Collins of Winchester, and Mrs. Carolyn Hulse of Louisville. One brother, Astor of Blackey, and one sister, Mrs. Nazareta Price, of Lexington, besides a host of friends and relatives.

Mr. Hays was a graduate of Berea College and the University of Kentucky Law School. He was a former Letcher County Attorney, City Attorney and at the time of his passing was the Circuit Judge from 1960 to 1968. He worked in private practice from 1923 to 1960 except for the years that he was holding a public office.

From an article printed in the Courier-Journal: When J.L. Hays takes the bench for the July term of Letcher Circuit Court he will wield a gavel made from a tree planted by George Washington.

The gavel is a gift from Emory L. Frazier, chief clerk of the United States Senate, a Letcher County native and a lifelong friend of Hays.

The gavel was given to Frazier several years ago by George Stewart, architect of the U.S. Capitol.

A scientist said that the elm tree was 160 years old when it was removed from the Capitol grounds in 1943. The tree stood near the Senate wing. The tree was known for many years as the “Washington elm,” and had been planted by George Washington in 1798 when he built his brick house a little to the north of the Capitol.

Judge Hays, appointed to the bench of the new Letcher Circuit Court by Governor Combs, was sworn in by his wife, Vivian, who is a notary public and is his secretary in the law firm he maintains with Emmett G. Fields.

The following remarks were made by Harry M. Caudill in behalf of the Letcher County Bar Association April 7, 1969: “Judge J. L. Hays was much more than a Judge: he was first and foremost a good citizen.

“He practiced his profession at this bar for nearly half a century. During all those years, his honesty and forthrightness were an inspiration to all with whom he associated — litigants, witnesses, attorneys and judges. To me and, I believe, to every lawyer in this court room, and too many others who have gone before, he was a true friend, a sage counselor and a steadfast guide. “ He endured our perverseness with much more patience and kindness than we generally deserved. His first love was not his family, though he loved his wife and daughters with unswerving devotion; not the law, though he was sworn to uphold it. His first love was Justice, and his loss is a tragedy to that noble cause. His likeness on this wall will inspire a respect for Justice so long as there is one of us left to remember him and his days of this earth.”

(The information on Mr. Hays provided by his daughter, Mrs. John L. Collins)

Dr. John Martin Bentley was a son of Mr. Riley and the late Mrs. Lucinda Profitt Bentley and was born at the old family homestead on the head of Rockhouse Creek in Letcher County on December 20, 1889 and was therefore approaching his 49th year when he died. In early life he entered the public schools and graduated from Whitesburg High School and soon qualified as a teacher in the public schools. For some years he followed the teacher’s profession and finally matriculated in the Kentucky University, Dental Department at Louisville. After studying there for a year or so, the World War came on and he immediately volunteered for service in the Army and soon sailed across the seas. He remained over there with American Expeditionary Forces till the Armistice was declared when he returned and was mustered out of service again. He entered the university till he was graduated with the highest of honors and returned to his native county. While in the university he met and won Miss Lavinia Dooley, a highly educated young lady of excellent family hailing from Paducah. In a few years, they were happily married. Two daughters, Misses Martha Louise and Lucinda Marie, came to bless the union. Soon after the birth of his youngest daughter, Mrs. Bentley’s health failed and in a few years she passed away. Mr. Bentley remained a widower holding sacred the memory of his deceased companion and devoting all his energies to his motherless daughters till about a year ago he met and married Mrs. Maude Cazoon, a well-known lady residing in Neon. She and his two daughters now both almost grown survive him. The two daughters, super intelligent and well educated, reside with their relatives in Paducah.

Some years ago, owing to his arduous experiences in the World War and rugged exposures on the battlefi elds, his health failed and for the last dozen years he could scarcely be classed as a well man. But he continued faithful to his profession even up to within a short while before his end.

Besides his widow and two daughters, he is survived by two sisters and two brothers. These are Mrs. Manerva Pigman, of Knott County, Mrs. Willie Crase, of Goose Creek, Shade Bentley of Haymond and Newton Bentley of Democrat. He is also survived by his aged father, Riley Bentley who still resides at the old homestead on Rockhouse.

The Johnson Funeral Home of Neon had charge of the undertaking and funeral arrangements. Memorial services were conducted in the new Church of God building in Neon with Revs. Wood and Dowis in charge. Burial took place Thursday in the old family cemetery near where he spent a happy childhood and early manhood on the head of Rockhouse.