With a full preseason and many familiar faces from last season, the Lady Jackets were looking forward to a great season. The great season did not happen but instead we had a good season. With All-State Stephanie Proffitt leading the way, Sandy Luther, Connie Brown, Lisa Shepherd and Beth Banks were the base from which the Lady Jackets were to be built. A very young and inexperienced group was to fill in the empty spots to make this team another state contender. Lisa Wilcox (freshman), Linda Potter (sophomore) Lesley Ison (freshman) and Suzette Sturgill (junior), all started one time or another throughout the season and did a fine job in helping the Lady Jackets remain rated in the top 20, as high as seventh, in the state all year long. If it wasn’t for a Breathitt County last second shot in the regional tournament, the Lady Jackets most likely would have a shot at a state championship in 1987. Coach John High.

The 1987 graduation was held May 29 at the Whitesburg High School football field. It was a week of spring showers and looked as though rain may force the ceremony to be moved. The sky stayed cloudy right up to starting time and then cleared for the graduation to go on as scheduled.

The guest speaker for the evening was Jerry C. Davis, president of Alice Lloyd College. The seniors also heard from classmates Sandra Collins, valedictorian, and Kristi Roark, salutatorian. Superintendent Bernard Watts and Principal Gene Horn provided the class with encouraging words about planning for the future through further education and training.

The evening was sad because the members of the graduating class realized that each person will soon be going their separate ways and yet there was also excitement in the air as it marked the beginning of one fulfillment of their individual dreams and hopes for the future. 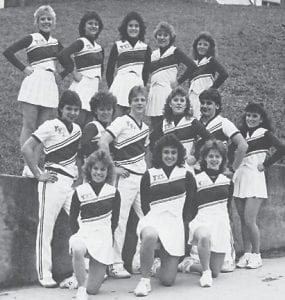 The students will be going as voting delegates: Elmo Mor ton, Sandy Meade, and Hatler Kiser. 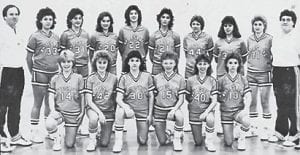 Winners from the region will attend the state competition in Louisville, March 12-14 at the Executive West Hotel.

In June of 1986, East Tennessee State University was the site of the UCA summer camp attended by the Whitesburg High boys’ varsity cheerleading squad. Our varsity and also our junior varsity squad were present and each won superior ribbons at the end of each day. The boys’ varsity squad was named the winner of the superior trophy at the end of the camp. Then came the hot and cold of the football season as our cheerleaders cheered our mighty Yellowjackets to victory.

In December, the Yellowjackets changed to basketball and our boys’ varsity cheerleaders also changed. At this time, we truly became a boys’ varsity cheering squad. Michael Slone, Craig Ison, and Lonnie Howard were added to the squad and we became the first boys’ varsity squad in the 14th Region to become co-ed. Our regional competition was held at the Breathitt County High School and, thanks to Heart and the Beastie Boys, we were named the first runner-up and advanced to the state finals of cheerleading for the first time in two years.

The state competition was held at the campus of the University of Kentucky and our squad well represented the 14th Region. We were named the winner of the most original pom-pom routine.